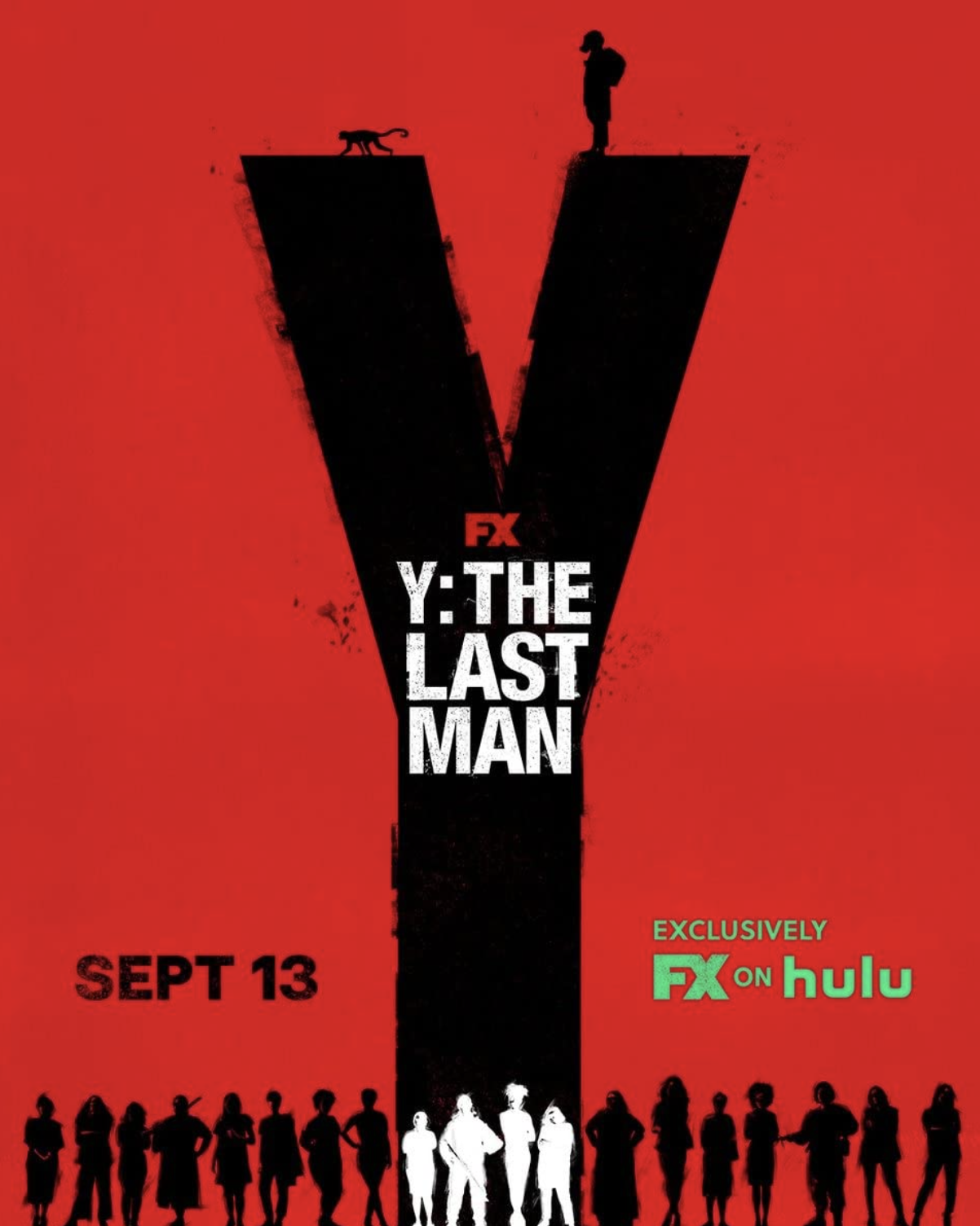 Basically: A cataclysmic event of unknown origins causes everyone with a Y chromosome to die in a puddle of blood—except for one man, Yorick, and a capuchin monkey named Ampersand.

The time is now…a parallel of now…frighteningly now. The source material is the much loved comic book series by Brian K. Vaughan and Pia Guerra (Vertigo 2002). The story revolves around a privileged man-brat called Yorick (Ben Schnetzer), an escape artist who somehow becomes the sole Y chromosome-bearing survivor of an extinction level event. Well, there’s also his pet monkey. But while Yorick is the central mystery, this isn’t his story alone. There’s Agent 355 (Ashley Romans), magnificent and ruthless, the acting President (Diane Lane), the Ivanka analogue (Amber Tamblyn), an EMT ironically named Hero (Olivia Thirlby), and Sam (Elliot Fletcher), a trans-man who’s forced to explain his existence yet again. This is the story of a diverse group of cis-women and trans-men who survive (more on that in a bit). The Y: The Last Man series, coming exclusively to FX on Hulu with a three episode premiere on Monday Sept 13, is a terse, slow simmering, at times head-scratching, but engaging take on a particular kind of apocalypse. The perspectives and issues missing from Vaughan’s decidedly male take on the story are re-envisioned through the lenses of a number of women creatives. They include showrunner Eliza Clark, writer Donnetta Lavinia Grays, and super producer Nina Jacobson. The result feels more rooted in the ways women see the world and the series, in turn, fires off an arsenal of dynamic performances. Top among them is Romans as Agent 355.

Probably the most important thing to me, in thinking about an adaptation of Y: The Last Man, was who would play Agent 355. Reading about this incredibly skilled and wondrously secretive Black woman pulled me into the comic more than anything else. Agent 355 is the single most important character in this story (argue with me if you want, you can’t win). I had no idea who could pull off this role, much less make it sing. I didn’t know about Ashley Romans then, but I learned. Romans teaches us the many shades of darkness and light, wicked intent hidden behind smiles, and true goodness buried beneath the kind of ruthlessness you can’t look away from. Romans as Agent 355 is killing the game. The second thing I pondered was how trans-people would be portrayed. Who would live? Would it be handled well? After watching five episodes, I believe the creative team did their best. But I am not a member of any trans community and so my viewpoint is distinctly from the outside. I can say, throughout those first episodes, trans-men are not only mentioned but Elliot Fletcher’s Sam becomes a central character. The show makes a point to reiterate that many men survived, just none with a Y chromosome, and that many women died. However, Intersex people are not mentioned in the first few episodes and we are left to assume the fate of trans-women; although by the end of Ep5 I got the sense we will learn more on that account. Let’s hope that’s true because trans-women deserve their recognition as survivors—especially in a story like this.

Despite the explosive and then mellow—hurried and then wait—rhythm of the series there’s a lot to keep you watching Y: The Last Man. Yorick and Hero (siblings) are going to piss you off because they are a couple of privileged brats who see what’s wrong with everyone else except for themselves and take no accountability for their own actions. Geek Girl Riot host Renee and I found ourselves wanting to slap box them repeatedly (listen to the show for more on that). Yet, even while we complain about those characters, we do it because they are well written. All the characters are. Their mistakes, grief, trauma, and foibles are all believably human. You’ll also want to cast side-eye upon Tamblyn’s character. The trepidation is real. That woman ain’t right and she for damn sure isn’t down for the cause. Sound familiar? On the upside, the cast is multi-culti and diverse. Nicely done. On the downside, things fall apart with a Lord of The Flies rapidity that you’ll find yourself dubious of. Perhaps a bit more of a time jump would’ve helped there.

So what am I saying? Y: The Last Man is a solid series, especially if you like post-apocalyptic or women centered stories with undertones of a thriller.

In the End: I’m going to keep watching, you probably will too.