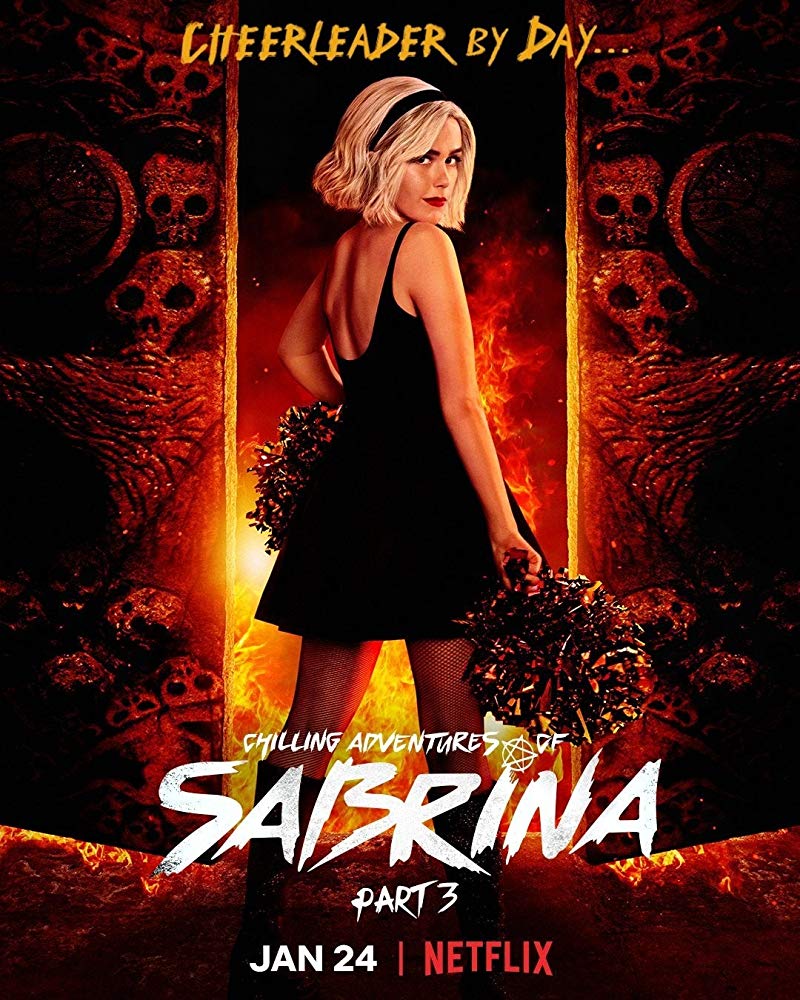 Basically: Greendale’s own Buffy the Demon Slayer is still cute but could go lighter on all the satan.

Part 3 brings us even more from the madness of CaOS [read: chaos]. Sabrina (Kiernan Shipka) is now the Queen of the Damned BUT she’d rather be a homecoming qween because ’Brina wants to get back to a normal life. We don’t know how she thinks that’s gonna work. Lilith / Ms. Wardell (Michelle Gomez) is far too sexy, um, we meant wicked to allow that to happen easily. Even the Queen of Hell has red tape to cut through and, ooooh, what if there’s a pretty little rival to the throne? Okay, that’s not a “what if”—it’s a “definitely”. Good luck with that, babes. And let’s not forget that Sabrina’s boy-fiend Nick (Gavin Leatherwood—ain’t that a name meant for whips and chains?)…um…what were we talking about? Oh yeah, Nick LITERALLY has the devil in him. We know all about toxic masculinity but this one is gonna burn. Speaking of hot, Ros (Jaz Sinclair) and Harvey (Ross Lynch) are in full coupling mode. Yay, watching them makeout isn’t a bother at all. Of course, now that she has her vision back, Ros might be seeing more than she wants to. That bodes ill. Then again nothing is ever going to go well when Greendale is an entire hellmouth all on its own. Which brings us to a drawback of the show. CaOS doesn’t seem to be growing as a series but is sinking further and further into the pits of raving satan-worship and derivative storylines…which is, well, let’s just say that watching a Satanist version of Buffy the Vampire Slayer isn’t as fun as watching, you know, Buffy the Vampire Slayer. Unless you count the giggling-ly good antics of aunties Hilda and Zelda (Lucy Davis, Miranda Otto). Yes, Nick is doing his best Angelus but nobody does “tortured good guy who is a simmering pool of evil” quite like David Boreanaz…so. Speaking of derivative, a character who is basically Violator from Spawn shows up in Ep3. There’s a lot of basically ‘this thing from that show’ in Part 3. So let’s hope you’ve never seen or read those originals, so you can enjoy CaOS more. Because sprinkling liberally with “satyr satan” doesn’t quite count as fresh…unless you’ve never seen ‘that thing from that other show’ (like I mentioned). Let’s further hope CaOS is eventually headed into the light to give us a counterbalance to all the rampant devil, hell, demon, damned stuff and more interesting [read: unexplored] occult terrain. That light, friends, could be found in the combination of Ambrose (Chance Perdomo) and Prudence (Tati Gabrielle). Please give us The Thrilling Adventures of Immortal Wisdom (look up their name meanings and you’ll see what we mean). That series would never get bogged down by the weight of far too much hell raising. ANNNND please let Ross Lynch AKA Harvey sing more. That’s the kind of wicked magic that really puts us under its spell.

In the End: If you’re into paranormal that’s hellbound and slightly derivative then this is for you. Pour a circle of salt around yourself and get those prayers up for S3.

Chilling Adventures of Sabrina returns to Netflix on Friday.