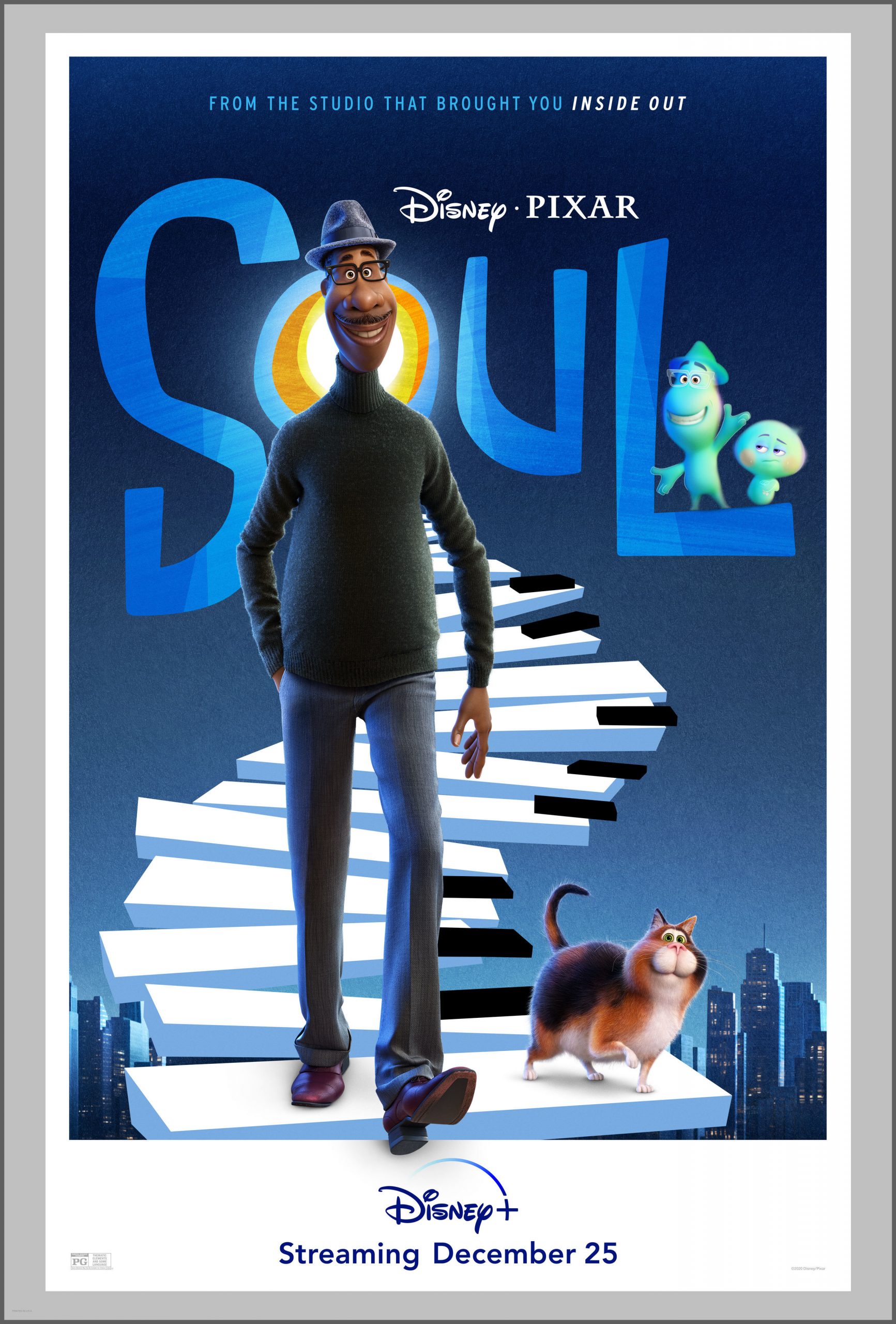 Basically: A nice mix of Heaven Can Wait with It’s a Wonderful Life tied together with Jazz.

Joe Gardner (Jamie Foxx) is a middle-school band teacher who is pretty unhappy with where he is in life and is going through the motions—still clinging to his dream of being a working jazz pianist in his home city of New York. Much to his excitement, he gets the opportunity to play with one of his heroes, but before he can reach the club he has an unfortunate accident. Our guy Joe is suddenly in the afterlife and desperately trying to find a way back to the land of the living. He’s not ready to move on to the great beyond. Through mistaken identity, Joe ends up with an unborn soul called 22 (Tina Fey) and the journey they go on, as Joe attempts to become a living person again, is pretty fun.

SOUL feels like the plot of a movie you’d see in the late 80s. Like there were times where I think having a Pointer Sisters or a Pattie LeBelle song would’ve fit perfectly. But I don’t know if this film will hit the way the creators might want it to with the audience. For me, it was easy to get into. I can empathize greatly with Joe’s plight of trying not to lose everything you’ve worked for right when you have that glimmer of hope of reaching your goal. With that being said, the film works in clear points of the three-act structure, to the point that it could feel like the pilot movie of a The Disney Afternoon series. SOUL does keep its themes together well throughout, even as it jumps around a bit. One thing Pixar is good at is keeping themes straight in its films (even The Good Dinosaur) and while their storytelling can get to a place where you’re not sure about the middle their films round themselves out as they reach the climax.

The vocal performances do a great job at keeping you invested. Jamie Foxx feels like perfect casting with his likable tone and I feel it helps that he’s a great actor who is also a musician along with being a comedian. All the jokes hit right with his lines and his interaction with Fey’s 22. Just two great vets going back and forth to keep you laughing the whole time.

Another thing that stands out is the lighting, especially in the scenes focusing on Joe’s love of playing Jazz. It’s really stellar to see light wrap around the figures and move with the music. The filmmakers play with the idea of synesthesia—so you see colors when you hear the music. There are other scenes where the lighting is just some of the best they’ve done in all of their films. Also, the care put into Joe’s world: his NYC, the barbershop, and the stores and bodegas.

All the very well crafted Black characters are nice to see in this film and bring a warm feeling of recognition. The design choices for the afterlife are another standout, with references to Jazz inspired cartoons and Blue Note Jazz album covers. I think enough has been said about the animation of Pixar and there’s not much else to say on that. They are some of the best in the world right now. While the score by Trent Reznor and Atticus Ross is good, it’s the Jazz music composed by Jon Batiste that really pushes forward during the film.This is a good movie and I hope people really take the time to enjoy it this holiday season.

In The End: SOUL is a good Pixar film about not letting your life pass you by. It gets a bit lost in the middle but figures itself out by the end. .

SOUL comes to Disney+ on Friday.