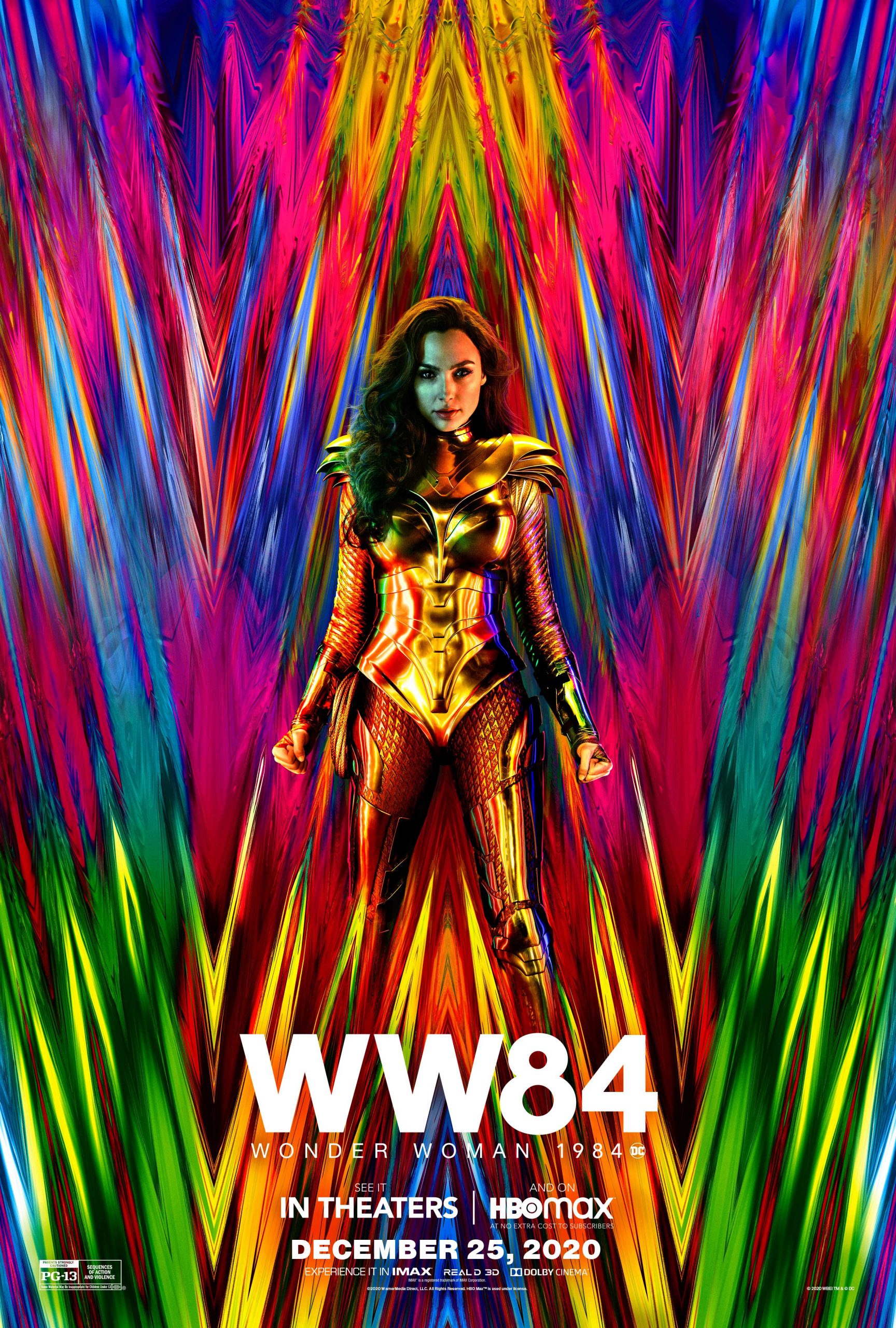 Basically: “Greatness is not what you think.”

Have I ever told you about the Wonder Woman underoos from my childhood? How I wore them while perched on a kitchen chair that posed as my invisible jet? If I haven’t told you before, it helps to explain what Wonder Woman symbolizes and why we still adore Lynda Carter after four and a half decades.

I didn’t expect Gal Gadot to put in such work but she is a much better Diana than I imagined she would be. She nails it, actually. Nevertheless, I had my problems with the first film, Wonder Woman (2017), which I’ve documented in posts and podcasts—so we don’t have to go into that here.

With those two sets of factors in mind, I sat down to watch Wonder Woman 1984 with a mixture of hope and trepidation. That’s not hyperbole, my stomach was churning, y’all.

If you’re a person who wants to know two things: Is it pretty and is there lots of action? Check. You’re covered. There’s also a sweetly goofy romance and lofty superheroic action. In the opening scenes a young Diana, played by a twelve year old Lilly Aspell, takes her place at the starting line of a competition. Imagine a gauntlet style obstacle course combined with a heptathlon. Yes! We’re back on the isle of Themyscira. Presumably we’re there for a memory of a hard won lesson that will impact the rest of the film. But does it though? Perhaps you’ll tell me.

That’s not a spoiler. You can watch it here.

Diana performs so well she loses focus and is nearly knocked out of the race. Until she uses her wits to recover and almost wins. Actually the win is taken from her by her aunt Antiope (Robin Wright)—still taking up space meant for the character Philippus (representation matters). According to her auntie, Diana “cheated.” Maybe there were hard rules to the game, if so we weren’t given any. Thus the message becomes: Women warriors should not be ingenious when knocked down but should simply stay down and accept defeat. Check.

That is only the first in a series of: Are we sure that’s the message we want to send to young women and femmes?

[author’s note 12/28/2020: A few people have remarked that Diana being yanked from the race is actually because she failed to complete the course. That’s the point. Diana lost and should have been disqualified after finishing, thus learning the valuable lesson that if you cut corners you still lose in a different way, but Antiope says she “cheated.” Think about that? There’s a huge difference between “losing” and “cheating.”]

We jump forward to 1984. It is as neon glossy and over-the-top as all of our favorite movies tend to paint it. Anyone who lived in DC in the 80s and 90s will recognize many famed locations from Georgetown—the Commander Salamander store and the canal especially. Wonder Woman is already a hero at this point, she’s just doing it in secret. She’s also incredibly lonely, still pining for the love she lost sixty years earlier during WWI. Lonely might be underplaying it. Diana is a completely disconnected academic with no friends and seemingly no ability to step out of the past. Mourning is indeed a heavy weight, I’m still mourning fourteen years later, but when mourning is presented as the sole defining characteristic for the last six decades of this rich character that’s a loss. Is this the hero we know? An early heist leads us to our two villains. First, Barbara Minerva (Kristen Wiig), who is a doctorate wielding outcast. She is underestimated and unnoticed by everyone at the Smithsonian except for Diana. The two women bond in their loneliness and I wish we’d gotten more of their friendship. Unfortunately, finding her way as herself isn’t enough for Barbara (there aren’t enough men gawking at her). Therefore Diana (the infinitely gawked at) becomes a template for who Barbara wants to be and what will become a rift between them is forged as quickly as their connection.

The second villain is a new take on Maxwell Lord (Pedro Pascal), a slick TV grifter who’ll remind you so much of Gene Hackman’s Lex Luthor that you’ll wonder why waste Pascal, a man who can elsewhere make you feel every possible emotion from inside a full metal suit. Plus, this style of character has already been done so well.

To summarize the set up (without spoilers) WW84 feels like it popped out of the Tardis, straight from the 80s with the plot to prove it: magical artifact, wishes made, lover back from the dead, oil barons, troubling depictions of POCs*, nuclear weapons, and parachute pants.

Geek Girl Riot host, Day Al-Mohamed said the first Wonder Woman film was a series of set pieces, strung together with thin threads of plot. She still enjoyed it. Well, WW84 may be a case of history repeating. I am an action fiend but the set pieces here only seem to serve themselves. There wasn’t enough emotion or impetus to give them true meaning other than the fact Wonder Woman is a hero. I longed for a No Man’s Land. There are some attempts but we never re-reach that high.

The story starts off in Saturday Morning Cartoon mode, without the usual giddiness, but it does settle into themes well worth exploring. It just doesn’t explore them very well or with any insight into what they mean. For example, we’ve got two powerful combatants in Diana and Barbara/Cheetah. Rather than explore who they are in a world of their own making, their stories center on how they are acted upon by men. Diana is missing a man so much it’s all she can think about. Barbara wants to be acknowledged by men so badly it’s all she wishes for. At one point Cheetah actually becomes a glorified body guard for Maxwell Lord because only “he” can give her what she wants.

See what I meant about those questionable messages?

On an even deeper level, we’re back to the old idea that women have to take power from each other in order to make it in a man’s world. Or that women can’t have love and power at the same time—we must always make a sacrifice, otherwise we’re “cheating.” Somebody tell that to Clark Kent or even the Spider and MJ.

Despite having some very promising themes about unchecked desire, do you want to know how we’re shown Barbara/Cheetah has become empowered? It’s when her hair keeps getting straighter and blonder. (Check. Curly hair not sexy.) And men start noticing her. (Check. A woman’s power is fueled by a man’s gaze.) Also, she no longer needs glasses when she becomes the woman she wants to be. (Check. Can’t have glasses and still be powerful) I know I’ve said this before but, seriously, tell that to Clark Kent. There’s even a body snatching subplot involving Steve Trevor (Chris Pine) that feels decidedly unheroic for both Diana and Steve. It makes sense that they revel in the moment of finding one another again, but their final decisions never factor in the life they’re stealing.

These many problematic messages dampened my enjoyment of the movie. And that’s before we dig into a plot that has too much going on to actually tell a satisfying story.

If you isolate yourself from critical thinking and any hope for a balanced narrative, or if you love Wonder Woman enough, you could probably watch this film and have a fairly good time. That is apparently not my superpower. I wanted more. I wanted a hero in her own terms with growth that comes from her personal journey. I wanted a villain we could question and dissect and find deeper meaning in—we got a deadbeat dad megalomaniac and an insecure attention junky with eventual anger issues. I know those work sometimes in some places, maybe they will for you.

For me, even the secret sauce that is Chris Pine couldn’t add enough flavor to make WW84 go down easy. Yet Diana does find her way back to being a hero, someone close to the woman who gave my childhood underoos meaning. For that, at least, I am thankful.

In the End: I’m glad that’s over but I’m still looking forward to more Wonder Woman and, hey, you just might like it.

Wonder Woman 1984 is out in theaters and on HBO Max on Friday.