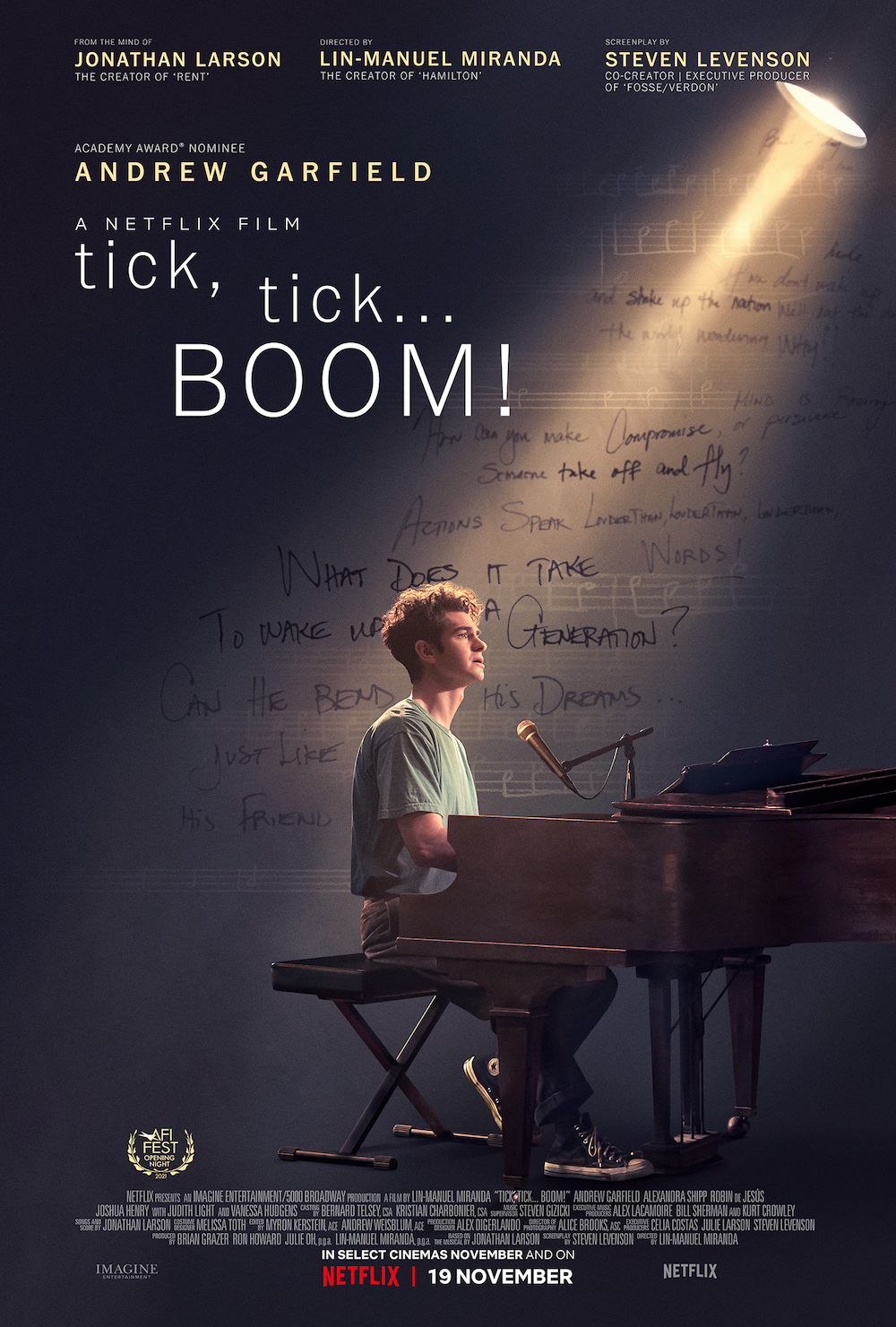 Basically: Andrew Garfield embodies Broadway creator Jonathan Larson, on his way to RENT, in this imaginative musical about making it.

tick, tick…BOOM! is the sound of the dreaded 30th birthday approaching. The Pulitzer Prize winning composer, lyricist, and playwright, Jonathan Larson wrote this autobiographical musical in the late 80s. He performed it six years before the Broadway debut of RENT, six years before his death from an aortic aneurysm at the age of 35.

While Larson probably never conceived of dying on the precipice—the actual night before—his game changing triumph, that knowledge thickens the themes of the musical, adding depth to an already rich story of the struggling artist who can’t possibly give up and have their soul survive. Lin Manuel-Miranda makes his debut behind the camera and he is not built to fail. Neither was Larson; the proof is in the music, lyrics that wittily express things we feel but lack the lexiconic palettes to paint so vividly, songs that don’t get old, they keep reconnecting. Miranda is clever in his presentation, allowing the show to play out on two stages: a performance of BOOM! exactly as Larson did it on piano, backed by the voices of his friends; and alternately in a dramatic reenactment. The emotional pull of this duality is strong, causing the characters to matter to us, almost as soon as they appear on screen.

Credit must also go to the actors, especially Garfield as Jon. Each performer takes on the lives of real people for only two hours and yet brings them forth with both weight and buoyancy.

Equally clever are the cameos sprinkled throughout. For fans of Broadway, they are a visit to Olympus to glimpse its most influential pantheon. I won’t say more, I want you to feel the way I did everytime time a voice I adore rang out and I saw a face that shaped why I love the theater. With those things in mind, I have a few questions for you:

Do you like storytelling that whirls you around lives you haven’t led but makes you feel them?

Are you that person who sings along, on the verge of shouting?

Is whimsy a wonder for you, even while pathos grounds the experience?

Do you have Netflix?

Well then, the answer to those questions is: See or stream tick, tick…BOOM! Enjoying it is as inevitable as the ticking of the clock.