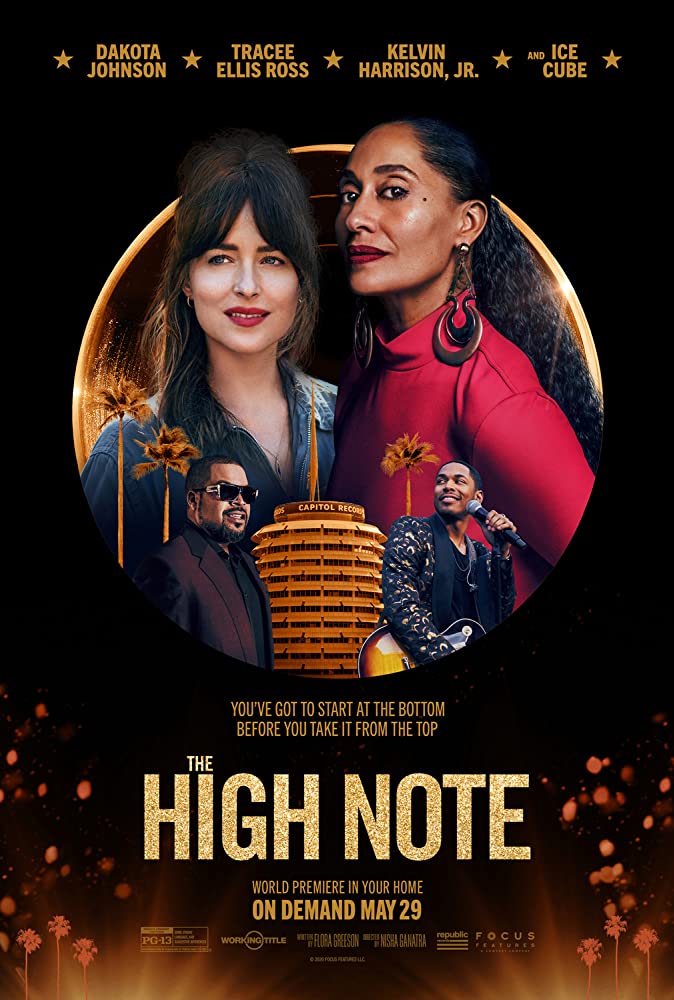 Basically: Some highs, some whoas, but full of good vibes.

Where do I begin with The High Note? I’ll admit to a preexisting bias toward Tracee Ellis Ross, Ice Cube, and Kelvin Harrison Jr. (three of its four stars). They have such magnetism, not only in their talent but also when they allow us a peek into their minds. Which is why I’ve been wondering if The High Note strikes the right chords to match its actors. I’m still contemplating this, right now, as I write this review. I guess we’re going to have to explore those uncertainties a bit.

The behind-the-scenes of the music industry aren’t what you’d expect. It seems like there’d be unlimited access and freedom and money flowing from fountains in your courtyard. It may be like that for a few but for most fame can be a cage. Ross, Cube, and Harrison Jr. get this; it’s their families’ world. Everyone tells you what you should be doing, how to do it, when, and most of all: Why you need to keep doing the thing that made you a star. I’m not telling you to weep for hit musicians (for the most part they do alright) but it’s not an easy gig.

The High Note, directed by Nisha Ganatra and written by Flora Greeson, gets that right. Theirs is a buoyantly amusing take but it’s not wrong. Ross flourishes in her portrayal of music icon Grace Davis, a singer who has “Best of Albums” in front of her and “new releases” fading in her rearview. Yet, she sells out stadiums every night. So what if she does the same show every night? It’s working, right? Grace’s manager, Jack (Ice Cube literally making a dollar out of 15¢), definitely thinks so. He’s ready to go on cruise control with more remixes of long ago hits and a
Vegas residency. Is this what Grace wants? No one asks, but there is someone who thinks they know. It’s Grace’s assistant, Maggie (Dakota Johnson), who is introduced in a ‘The Demon Wears Sequins’ type of montage. Maggie seems to “get” Grace as much as she admires her. Maggie also took the assistant job to further her own dreams. Perhaps her untapped skills as a music producer and Grace’s stifled creativity could form a mutually beneficial future for them both. Perhaps.

In the meantime, Maggie runs into the lovely & amazing indie performer David (Harrison Jr.) at a bodega. Hello sparks. Oh hey, mutual love of music. Welcome, to the cliché that Maggie is so much better at music than EVERYONE ELSE.

So, now you know the set-up, what does it mean? Here’s my conundrum:

First up, the highs and the oh noes…
The High Note is a warm, Saturday afternoon kind of movie. Ross is clearly channeling a mega-mix of all the great singers she grew up around. This real world connection makes Grace tangible. However, Cube is given a standard manager character. So mean, such a know-it-all, so dismissive, but it’s Cube and he makes it work. Meanwhile Kelvin Harrison Jr. continues to prove he’s outstanding. Seriously. OUT-STANDING. Johnson does a fine job but (in my second admission in this review) her character feels a bit like she’s wearing a cape—swooping in to save R&B…um…yeah…nah. Also ugh. Yet beyond that there’s something so nice about watching Tracee Ellis Ross realize her dream of a lead film role + performing her first songs, and doing both so well. The music is good too. What’s up, Rodney Jerkins. A standout is the song that David and Maggie write together. Something about “not being your taxi.” I don’t know but I like it and I will buy the single. I mentioned Harrison Jr. is outstanding, yeah?

Another place where The High Note gets it right is in its understanding that women still face discrimination and sidelining in the music industry—even when they’ve proven themselves with platinum. At one point Grace points out that only five women have had a #1 hit after the age of forty and only one of them is black. Damn. True. And painful to hear.

Despite all of the goodness I mentioned—along with a few laughs and a genuinely pleasant experience—this movie dodged a major L with its streaming release. The word “tv movie” (in the old school sense) came to mind and, despite my guilt for thinking it, the thought lingered.

There’s no deeper emotional draw here. The film feels slight, as though we’re missing a number of scenes that would’ve connected us to the characters and their stories in a meaningful way. The structure is off as well. As though there was a limit on story beats, thus the ones we see on screen feel pulled from a bag and arranged as best as could be. And I’m still…okay, I’ll say it…annoyed by the manager’s standard meanie character and Maggie’s savior cape. Ice Cube is capable of so much. Why not give him a guy with a past that resonates with why he advises Grace the way he does? Why not give Grace and Jack a relationship with the kind of complexity that gives his complacency weight? And why the hell did they need Maggie to save them? Couldn’t we have a truly mutually beneficial exchange, both emotionally and as a career builder?

Oh and there’s a twist at the end, that if you’re anything like me, you see coming so hard you just kind of nod your head when it hits.

You see? ’tis a conundrum. The High Note is good candy but I couldn’t
completely savor it. When it comes to the music industry, it needs more salty to balance the sweet.

In the End: This one is worth streaming.