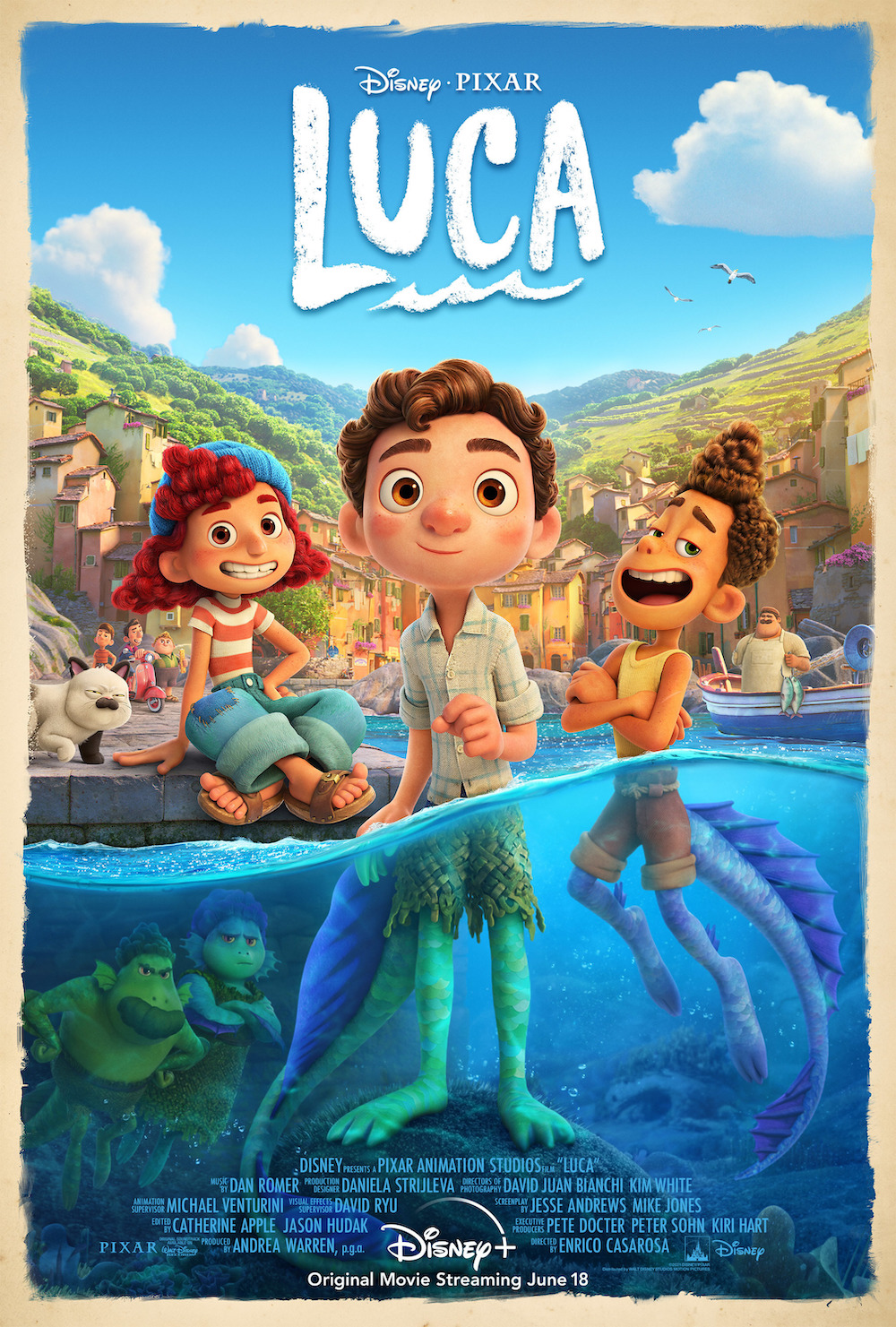 Basically: Two young sea kids try to have an adventure in a small Italian town without anyone finding out what they are.

Pixar is in an interesting position right now in the whole Disney juggernaut, which is slowly rolling over everything in the media-entertainment landscape. Pixar is still constantly making amazing films that push what they are known for in interesting and subtle ways. But there is one thing that is troubling me: Why are Pixar films—the ones that win Oscars and awards—the new Disney Home Video Movie releases of the 20s? Some of you might not remember but in the 90s Disney started a new trend where they’d make sequels to their hits on home video. They had a whole new studio made from the TV animation studios to essentially make throwaway cash-in entertainment. But comparing that model to what Disney is doing now with streaming, is it fair that Pixar’s films are essentially the free tier, good draw-in content for Disney+?

Now to the subject at hand: Luca is a film about a 13-year-old boy who lives in the sea. He’s a sea creature, just like his family. Luca (Jacob Tremblay) is coming of age and growing curious about the world in a way his mother (Maya Rudolph) specifically doesn’t want him to be. One day he meets another young sea creature boy named Alberto (Jack Dylan Grazer) who basically lives alone. He becomes Luca’s first real friend and they go on adventures together. Unfortunately those adventures get Luca in trouble with his mother, which causes him to run away with Alberto to where the dangerous land creatures AKA humans dwell. From there, as they say, hijinks ensue. The film is visually beautiful with a really warm story. The filmmakers chose a great aesthetic that captures the warmth of mid-century European, especially Italian films. The lighting is strong with wonderful bright colors painting the settings and characters. The sun bounces off the water’s pretty shade of blue with a nice use of sparkles to subtly perfect the field of vision. The characters also have a look like that of Claymation, with a tactile feel that reminds me a bit of Aardman Animations projects like Wallace and Gromit. It’s not exact but it gives me that impression of real things moving in actual space while maintaining that great animated squash and stretch feel.

The story works in many different ways for different audiences. People can connect to it especially in the context of the outsider wanting to fit in somewhere. Yet I think for people of color, the idea of assimilating to the larger community and the concept of passing can easily come into play here (shout out to Sherin on bringing up this viewpoint to me in conversation). I also see from a perspective that it could connect to LGBTQ+ folks and spur some conversations. While the film isn’t about these themes specifically there is a lot that can connect to those experiences growing up and some of the feelings and challenges. All the characters are so very well realized and fit perfectly into their place but again, this is Pixar, they don’t really fail in that regard.

In the End: Luca is such a wonderful film that could be watched over and over again. Full of joy and wonder with a great story and theme of connection and becoming.