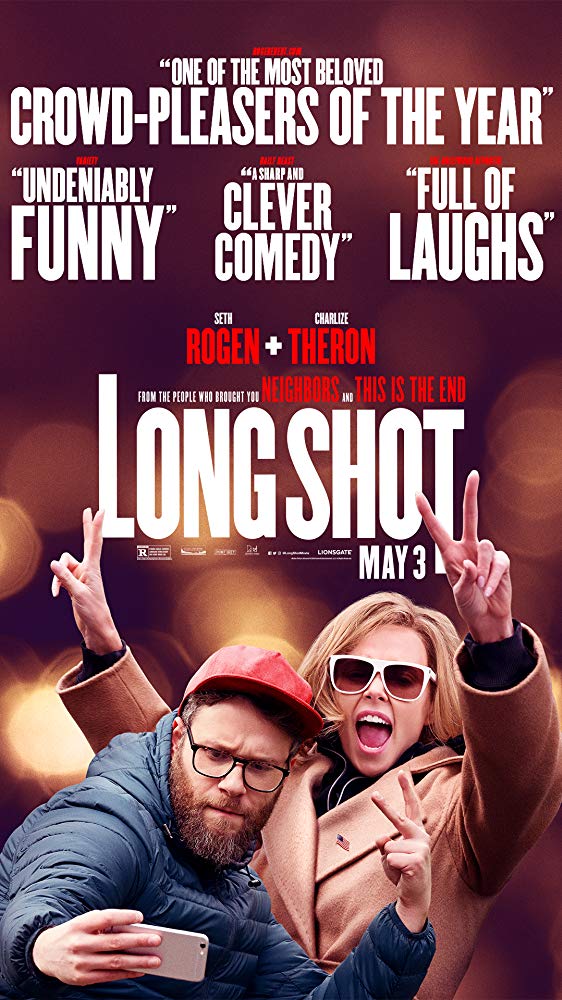 Basically: Romantic opposites attract, clash, and smash on their way to the White House (and maybe the weed spot).

I love a cocktail (especially when I can get one at the movies). The studios were bound to catch my attention with a romcom that’s a reversed Pretty Woman, with a splash of There’s Something About Mary, and a twist of Dave. That’s what you’ll get with Long Shot, starring Charlize Theron and Seth Rogen as the most oddly appealing duo since Milk + Pepsi or Lemonade & Beer.

Rogen is in classic-mode for this one. He’s Fred Flarsky, a funny schlubby journalist who is liberal to the bone and willing to break a bone or two to prove it. That means he also has a problem listening when others fail to share his beliefs.

Theron does her chameleon thing with Secretary of State, Charlotte Field. Charlotte is perfection walking—smarts, speech, style. She has her eye on the Presidency and she doesn’t have time for the young social justice warrior she used to be in high school (and neither does her team June-Diane Raphael and Ravi Patel). That means she’s a repressed sex-positive-geek who’s starving for someone who gets her. 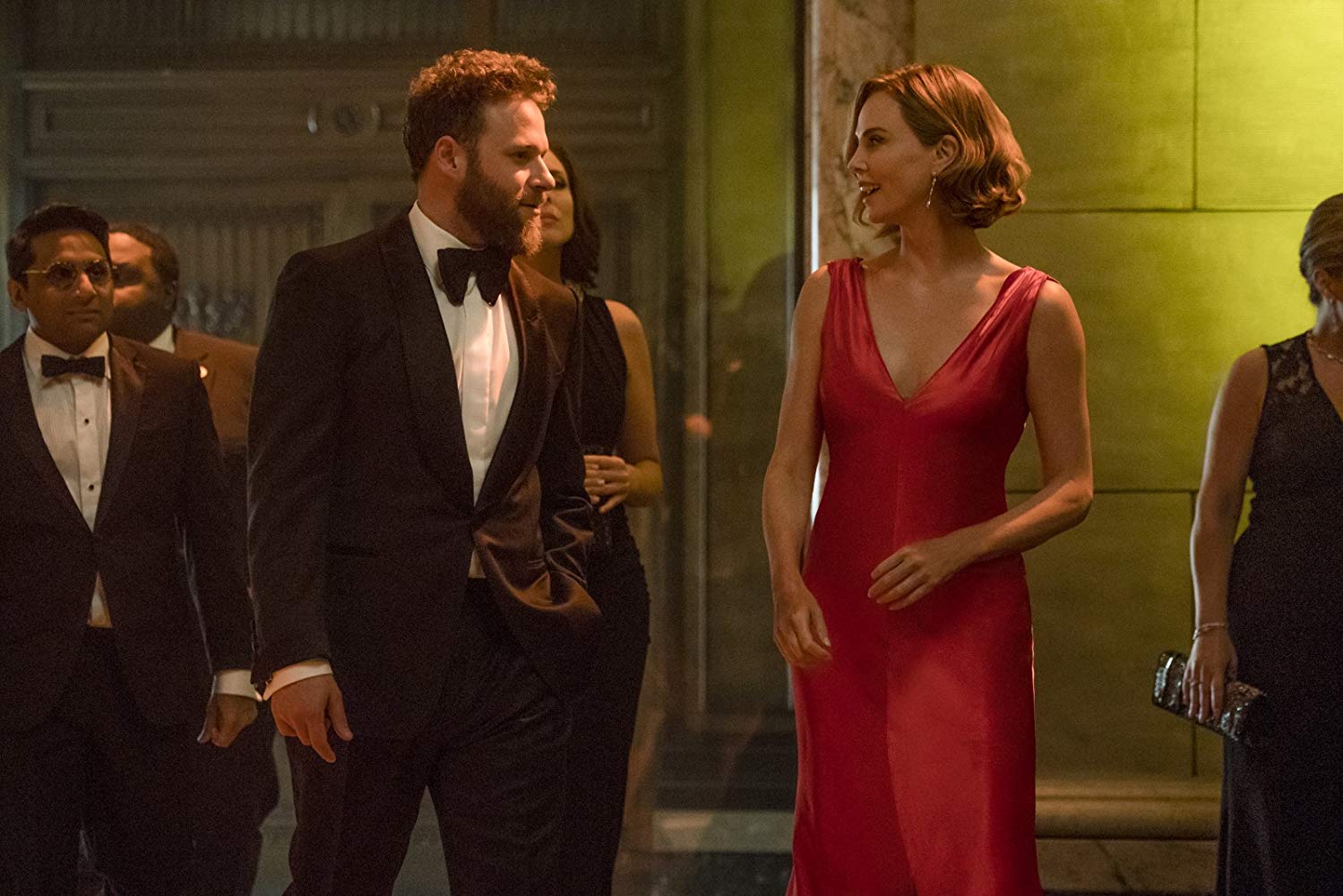 Wait. Did I mention this is a reunion romance? Oh yeah, many of the top romcom tropes play a part in Long Shot. Charlotte was Fred’s babysitter back in the day and they shared a moment…an awkward totally embarrassing moment. The kind of moment most of us pray the other person will forget. Here it binds the two—because movies need surprises and every love story has its weirdness.

Charlotte and Fred share one big weird, wild, far reaching, globe traveling, farfetched, action packed, embarrassing, inexplicable but somehow sweet romance, that starts when they run into each other again (while being serenaded by Boyz II Men) and she hires him as her speech writer. It must be hard to say goodbye to yesterday because a large part of the romance revolves around Fred reminding Charlotte who she truly is, and Charlotte accepting Fred for never having grown up.

See? Classic. At times maybe a little too classic. The perfect girl falls for “seriously that guy?” trope is as overdone as last year’s memes. We’ve seen it a lot. Where Long Shot departs: All the guys are “seriously that guy?” except for the secret service agent, who is definitely the chauffeur from Pretty Woman and is therefore sublime. Soooo, you know, with those limited options, the two fabulous women (just the two—something Raphael tells us Theron fought for), they can’t…um…lose? AND Fred grows, he actually has an arc where he realizes he can be himself without forcing everyone else to be him too. 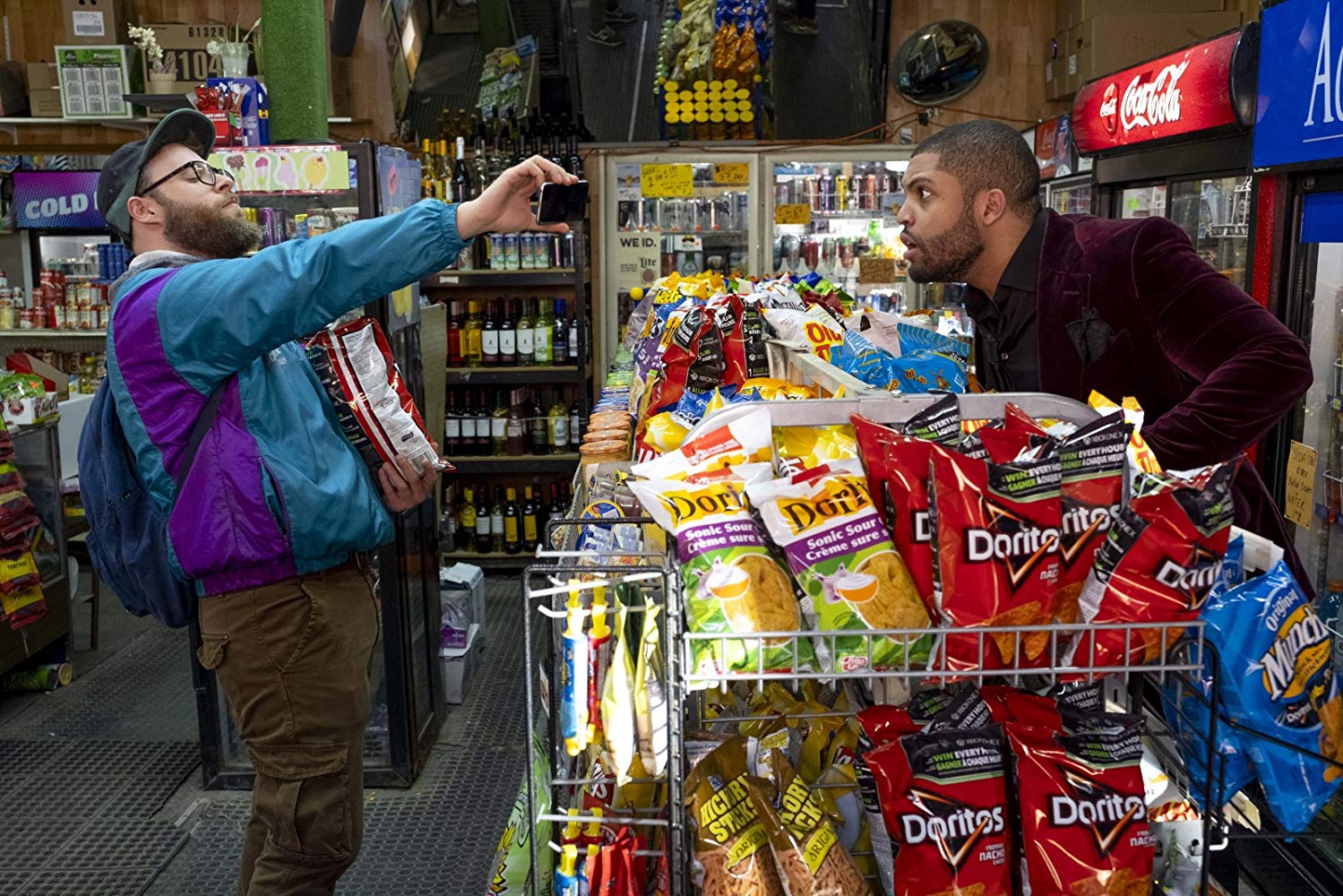 So despite the drawbacks—you’ll spot them if you read that last paragraph for subtext—this movie is fun and the comedy works for the same reasons the romance does: Opposites attract, clash, and smash (note: smash is true in both its slang and literal iterations).

The lead pairing works too. Theron and Rogen have a great rhythm and they understand when to let the other’s quirks shine. In their hands, Charlotte and Fred are honest and relatable in tangible ways. Raphael, Patel, and O’Shea Jackson Jr (as Fred’s ride or sigh) are all the twist of lime that makes a solid cocktail that much tastier. And the script is funny and mostly sharp and surprising.

Director Jonathan Levine wanted to make an 80s style romantic comedy—like Pretty Woman—where the the love and laughs are a second harmonic coupling. By adding nods from slapstick love stories—like TSAMary—and upping the stakes higher than your typical romcom, Levine succeeds. It’s just that, Long Shot doesn’t have the iconic moments that make the genre classics sing, perhaps because most of its grand gestures play out as homages rather than invention. Still it’s a fun time at the theater and we really need the love right now.

In the End: Long Shot won’t intoxicate you but it will get you buzzed.