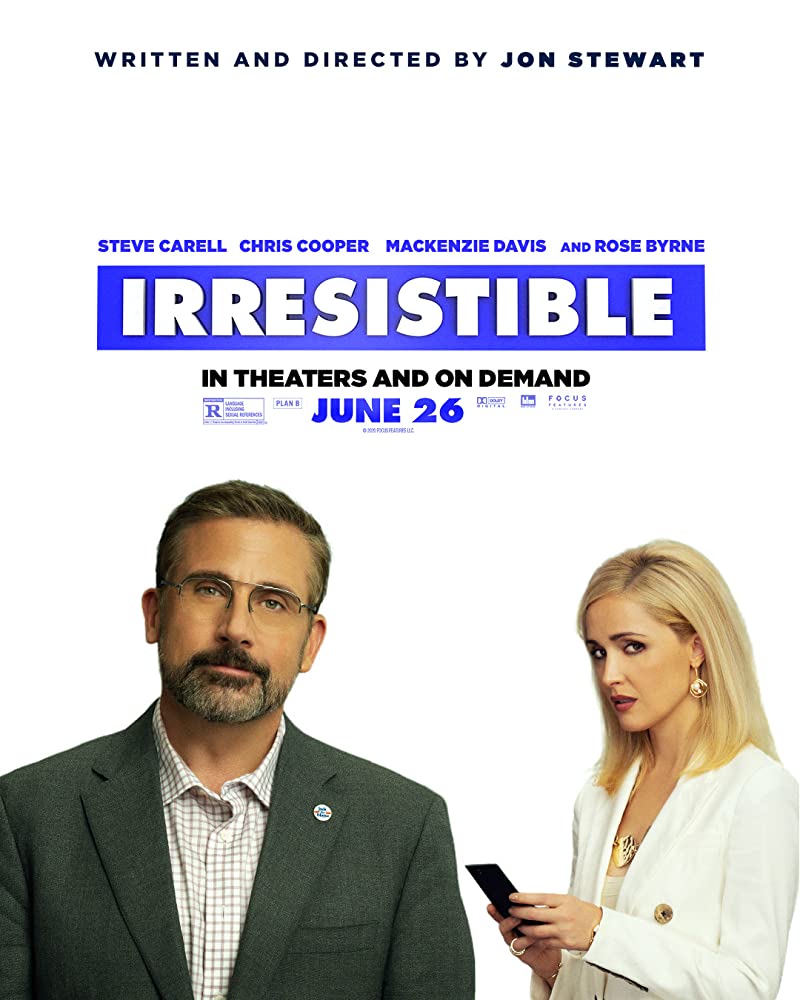 Writer/director Jon Stewart, the former host of The Daily Show, knows the intersection of politics and comedy well. It makes perfect sense for him to move into satire, even after writing the political biopic Rosewater a few years back.

Stewart enlists the aid(e) of Steve Carell, Rose Byrne, Chris Cooper, and a full host of cameos to bring us Irresistible. The film satirizes political fundraising and the ways the two parties attempt to wrangle the heartland for votes—you’ve got to please those battleground states, at least once every four years, right?

Carell plays Gary Zimmer, who is known as a “consigliere” for Democratic presidential nominees. You have to laugh at the crime allusion in that term but it also serves as a bit of foreshadowing. Stewart wants to make it clear we’re being hustled by the current political system and the media plays into it. He makes his point by sending Gary on a desperate quest for relevance after he makes the mistake of ignoring the swing states during Hillary Clinton’s campaign. Gary’s team discovers the perfect conservative, possible Democrat, and flagman in the form of Jack Hastings (Cooper) who is a classic man of the people. This retired Wisconsin marine colonel just might be the vehicle Gary needs to get back on top of his game. It doesn’t hurt that Jack has a tall, blonde, earnest and astute daughter. Of course, Gary also needs a nemesis in the game, one who’s also a third potential love interest. Three. She’s another consigliere but for the Republicans. This is Byrne’s Faith Brewster. The way the two nemeses lob dirty tricks at one another is indeed criminal. Faith flummoxes Gary at every turn, which is kind of fun to watch.

As I mentioned, Stewart is very good at this kind of thing but the fun of the film ends with the rivalry between the two campaign managers (oh, and the two Mikes, played with old school comedy duo skills, by Will Sasso and Will McLaughlin). It’s not that Irresistible isn’t well acted, shot, or written, it’s the fact it seems to retread overtrodden earth where nothing new is likely to grow. The film’s harpooning of “politics as usual” is so “politics as usual” that you find yourself grasping for something revelatory. Other than the #feminism that underscores the plot: What does the gang warfare of the two parties; the sensationalism of the news to the exclusion of fact; and the loopholes in the system all mean? This movie does a lot of talking but it’s quiet on that front. What we get instead is a bunch of mean city folks showing a bunch of rubes the way forward. Even with a twist of fortune at the end, it’s all kind of annoying. The leading characters are so pretentious and “clever” it’s difficult to connect with them as people. Their goals mean nothing to us as an audience. Unfortunately you feel the same about the small town denizens as well. They’re caricatures with a few amusing quirks but not much else to justify their equal but opposite smugness. Perhaps if the film had tilted full on towards absurdity, it might’ve found a grip on our imaginations. Instead it’s too quiet to be arresting and too annoying to be
thought provoking.

In the End: Stewart wants us to realize the political hustle is criminal but this Irresistible hustle has no actual game.

Irresistible will be out on demand tomorrow via Focus Features.