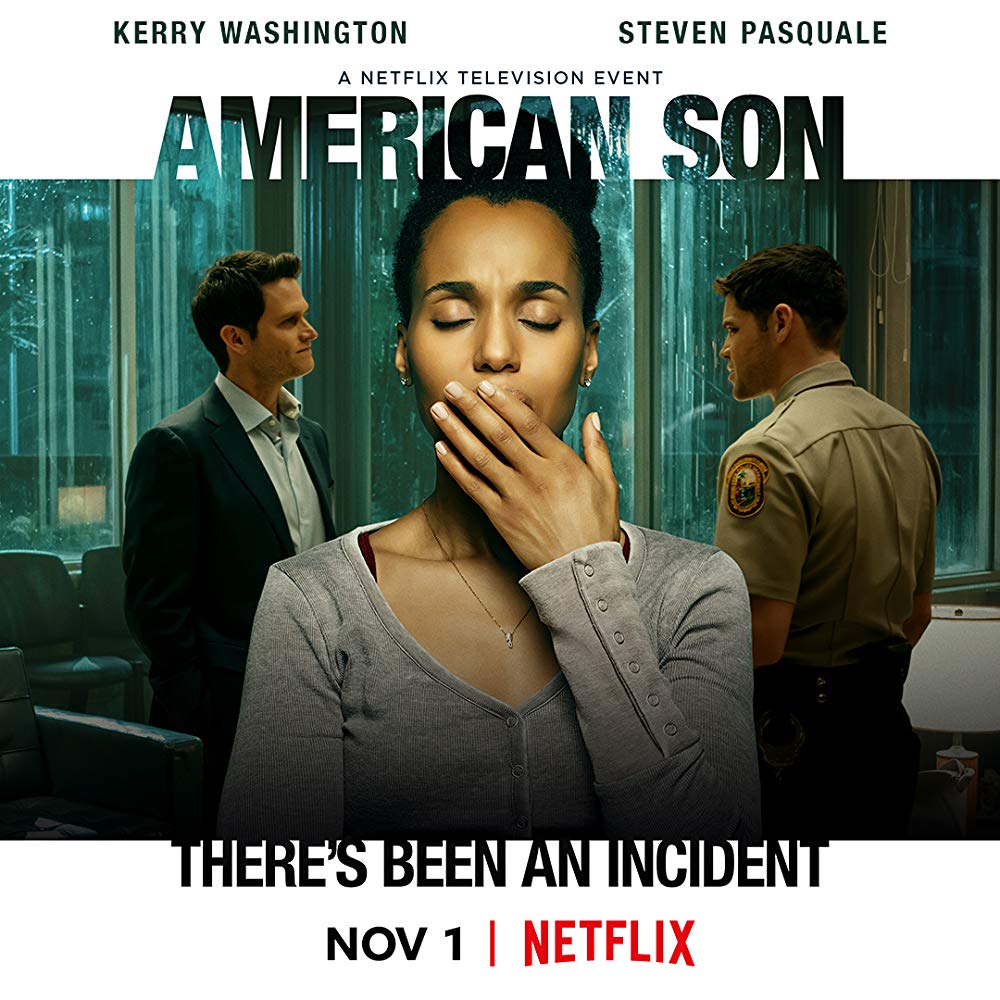 Basically: A harsh slice of the truth about being Black in America.

In reflecting on the Netflix adaptation of American Son, I’m reminded of a line from A Few Good Men, “you can’t handle the truth.” I’m not being glib. This one is all about hard truths. And by maintaining the four-actor, stormy night, one-room structure of the Broadway play, the film focuses you on its honesty in a way that may be hard to take in. Or, worse, easy to dismiss. But try not to do that. Playwright Christopher Demos-Brown and Tony Award® winning director Kenny Leon (A Raisin in the Sun, Fences) have created something worthwhile in American Son. In order to see what’s really happening on this particular stage, you’re only required to remember you’re watching a play—not a film. If you can do that you’ll find a work of art that is riveting in its own taut way. Kerry Washington is Kendra Ellis-Connor, mother to a black teenager on the verge of manhood. His name is Jamal and he’s missing (we never see him). Opposite Washington is Jeremy Jordan, the police officer who can’t seem to comprehend that his casual disregard and assumptions about Jamal are based in a racism so intrinsic to our culture that he can’t “see” the boy or his mother—at least not as anything other than a possible gangbanger and an “angry black woman”. Parallel to Washington’s Kendra, but never quite in sync with her, is her husband Scott (Steven Pasquale). He’s a loving father but he doesn’t get the black experience or that despite having married a black woman he’s also been conditioned to see black people as only one thing. Finally, we have a cold antagonist in Lt. John Stokes (Eugene Lee). He isn’t a villain but he is an adversary to Kendra and Scott and he deftly steals their power on multiple levels.

Damn, the acting here is good. So are the dialogues. They have to be. The story is one long conversation in a police station. Each part revealing more about these characters and the tiny traumas that led them to this moment. There’s not a lot happening outside of the characters, most of the action is internal, and some people may find it difficult to wait for the news of what happened to Jamal. I didn’t have that problem (but I’m a theater baby). If anything kept me from giving American Son a higher rating it’s that this format isn’t as well suited to the streaming audience as it is to Broadway. Yet, for me this story is a tragic truth about being black in America. The way people decide who you are and what you know before they’ve learned your name. The microaggressions of asking about street names and gold teeth because we all have those, right? Even when we don’t. Or the way black mothers, aunties, grandmamas, sisters, and femmes worry about black boys and men and those who present as masculine everytime we send them out into this world. It is an unending anxiety you cannot know without being black. But you can listen. And you’d learn how we worry for ourselves too.

Amercan Son is all of the above pain and anxiety and it’s the truth. The only question is, “Can you handle it?”

In the End: This is a quiet boil that’s well worth watching.