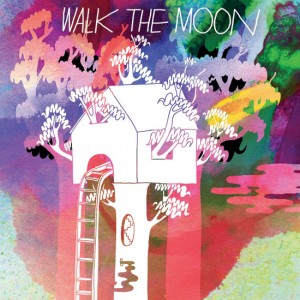 Walk The Moon have been making waves with the magical indie pop sound heard on their self-titled sophomore album. Walk The Moon is primarily made up of re-recorded material from the band’s 2010 debut I Want! I Want! and 2011’s Anna Sun EP, along with three brand new tracks to round out the collection. With their upbeat, dance-ready brand of indie rock, Walk The Moon have delivered the perfect soundtrack to the rest of your summer.

Notably, the band have revamped fan favorites like “Lisa Baby” and “Anna Sun,” the latter of which rose to recent fame as MTV and Seventeen Magazine’s “song of the summer.” The new arrangements add a spark to the band’s already infectiously danceable tunes, with the enthralling new synthesizer riffs and clearer vocal runs of “Quesadilla” lending a new shine to the track. Despite the quality upgrade on these tracks, fans may be disappointed to find only three new tunes after more than a year of waiting. Fortunately, “Shiver Shiver” infuses the album with funky soul vibes though singer Nicholas Petricca’s clear-as-glass falsetto overtop heavy bass slapping. The 35-second instrumental buildup that follows, entitled “Lions,” cleanses your palette before launching into the final portion of the album.

For new fans, this album is a perfect leap into the world of Walk The Moon, an indie wonderland as colorful as the paint they dab onto fans’ faces at their live shows. For those hoping for more new content, “Shiver Shiver” and “Fixin’’ will help satisfy your need for new Walk The Moon jams, at least for now — these tracks stand resolutely as some of the best material the band have ever produced. The album captures the quintessential summer spirit with adventure-laden lyrics like “Don’t even tell me where we are going / Just walk by my side” and “City in the rear view and nothing in the distance / We laugh at all the talk / What do you think of getting lost?” If summer is a journey, then consider Walk The Moon the perfect soundtrack for exploring the world with a skip in your step.