Basically: Will Robinson is a s#!t magnet, which makes Lost In Space intense but fun.

“Will Robinson is a s#!t magnet.” That’s what idobi contributor Philip Jean-Pierre said when I told him we’d be reviewing the Netflix reimagining of Lost In Space. Nine episodes later I texted the same phrase back to him, because it’s true. That is the glory of this sci-fi family action-adventure. Will Robinson is a plot engine like none on earth—constantly creating conflict and upping the stakes.

The show kicks off during a family game of Go Fish in the year 2048. Sitting around the card table are The Robinsons: parents Maureen and John, eldest daughter Judy, middle child Penny, and Mr. Magnetism himself, Will. The scene gives the family a relatability in that they could be ours. The banter is light and teasing. There’s an underlying riff between the parents (Molly Parker, Toby Stephens). The eldest (Taylor Russell) is no longer daddy’s girl. The middle-girl (Mina Sundwall) has all the sarcasm and need to be recognized as our favorite inbetweeners from pop culture. While the youngest and possibly most talented (Maxwell Jenkins), suffers from the greatest insecurities. See? You do know them. What makes The Robinsons different from most families is they are in deep space, in the middle of an evacuation, and something has gone horribly wrong. Wrong as in explosions and oh gosh, oh gosh we’re all gonna die.

After crash landing on an alien planet the family is thrown into a pretty thrilling set of individual perils. Their use of recognizable skills like emergency medicine, scuba diving, and basic chemistry creates a slow boiling tension that leaves us wondering how they’re going to survive again…and again. It’s a clever set-up by the writers. We’re so caught up in the action, we don’t realize they’re introducing us to each character’s skill set and temperament, which builds a foundation for every decision these characters make in the next 10 episodes.

To be clear, you’ll want The Robinsons to make good choices during the first season of Lost In Space but they won’t. They really, really won’t. We see this in the flashbacks that parallel the main conflict of each episode. The bad decision making extends to the genderswapped Dr. Smith, played with sinister intent and questionable motives by Parker Posey. She says she’s a psychologist but we’re going to warn you to stay off her couch. The alien planet is our main antagonist but Dr. Smith is a strong secondary foil who excels at manipulating situations for her own good. It’s a good thing Smith is counterbalanced by the quirky macho swagger of Don West (Ignacio Serricchio). The mechanic has the charm of a con man but the tenderness of a bad-boy romantic lead. What? I’m not foreshadowing…but there’s a spark you just know is on the backburner for future seasons. The chemistry isn’t all in the science. Just saying. 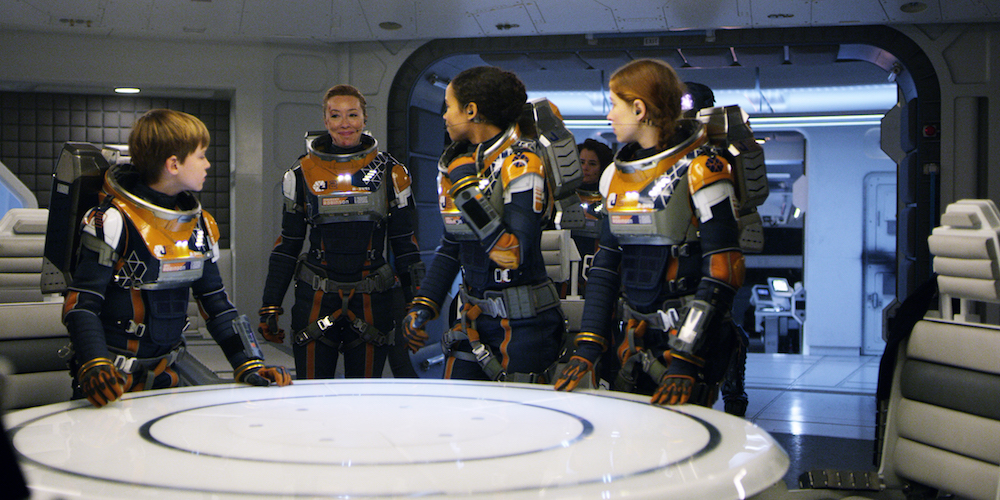 The production design is equally strong. The costuming and spacecraft designs are a natural progression of where our space program is today (or was before, you know). I particularly like the all-terrain vehicles the colonists use on the planet surface. I’m calling them space RVs—you’ll see what I mean. By aligning the production design with the shapes and styles we have today, the creative team allows us to easily imagine this is our future. That’s smart design. There are also visual nods to anime and cult hits like Pitch Black. Again, very smart on the part of the creators. We feel like we know this world.

Back to Will Robinson and his magnetism. Within the first episode he almost gets his sister killed. He falls down a hole. He gets lost and ends up at a crash site. There’s a forest fire. Oh, and he makes friends with an alien robot who has claws and shoots hot lava out of his palms. But, hey, that’s just Will being Will. The relationship between the boy wonder and his Robot is one of the strongest on the show. Their friendship goes through the fire and it pays off.

Lost In Space is a true adventure series. The Robinsons cannot win. Every smart choice they make leads them into trouble and every silly decision is emotional flambeau. The show is harrowing and fun and engaging. You find yourself getting mad at the characters because they’re so human and you care about them (also because they’re all brilliant and yet deeply stupid). The tension is relentless as you watch the colonists consistently act like real people in a bad situation. Rather than amped up technology, Lost In Space is rooted in real life survival skills and plausible science. The creators don’t stir up ridiculous scenarios to fabricate thrills, they gives us the full range of humanity. That’s exciting. Hard choices have consequences; the repercussions of those spur of the moment decisions are far reaching even when the characters have the best intentions.

I like it when smart people, bad decisions, and fantasy converge. It makes for good sci-fi.

In the end: Allow me to be my geeky self and tell you, Danger, Will Robinson, Danger, you’ll easily get sucked into Lost In Space.