As a podcast, from Gimlet, Homecoming was a taut science-fiction journey into a nefarious government facility. There we were guided by an unreliable narrator and a soldier who either needed to be on his meds or off them. It was good. As a series, from Amazon Prime, Homecoming becomes a hallucinogenic spiral into that very same place. The series is damn good. Everything is so ominous. Created by Micah Bloomberg and Eli Horowitz and directed by Sam Esmail, Homecoming is a visually lush exploration of trauma, memory, and the human heart vs. the mind. Who can we trust if we cannot trust our memories? Homecoming endeavors to answer that question and it’s a slow burning thrill to watch it unfold. Julia Roberts plays Heidi, a therapist working for a government program seeking to welcome soldiers home and reintegrate them into civilian life. When she bonds with one of of her veterans, Walter (Stephan James), she begins to see the world through his eyes and that world becomes more wonky the further Walter gets into Homecoming.

The series does an incredible job of making its soundscape as wholly immersive as the podcast and the visuals are equally enthralling. Everything feels claustrophobic, from the closed in facility setting to the hazy vertical framing—meant to pull you in and make you question each person’s reality…or at least their perception of events. Not to mention the layers of visual and spoken symbolism that decorate each scene; it’s almost impossible to catch them all but you’ll find yourself getting obsessed with spotting them. Each of these factors—from the name of the GEIST Corporation to pineapple cobbler to an unravelled shoestring—strengthens the story as Heidi, now a waitress in her hometown diner, tries to piece together how she lost her career and her memories. Most importantly she’ll have to put herself in danger to figure out what happened to Walter. 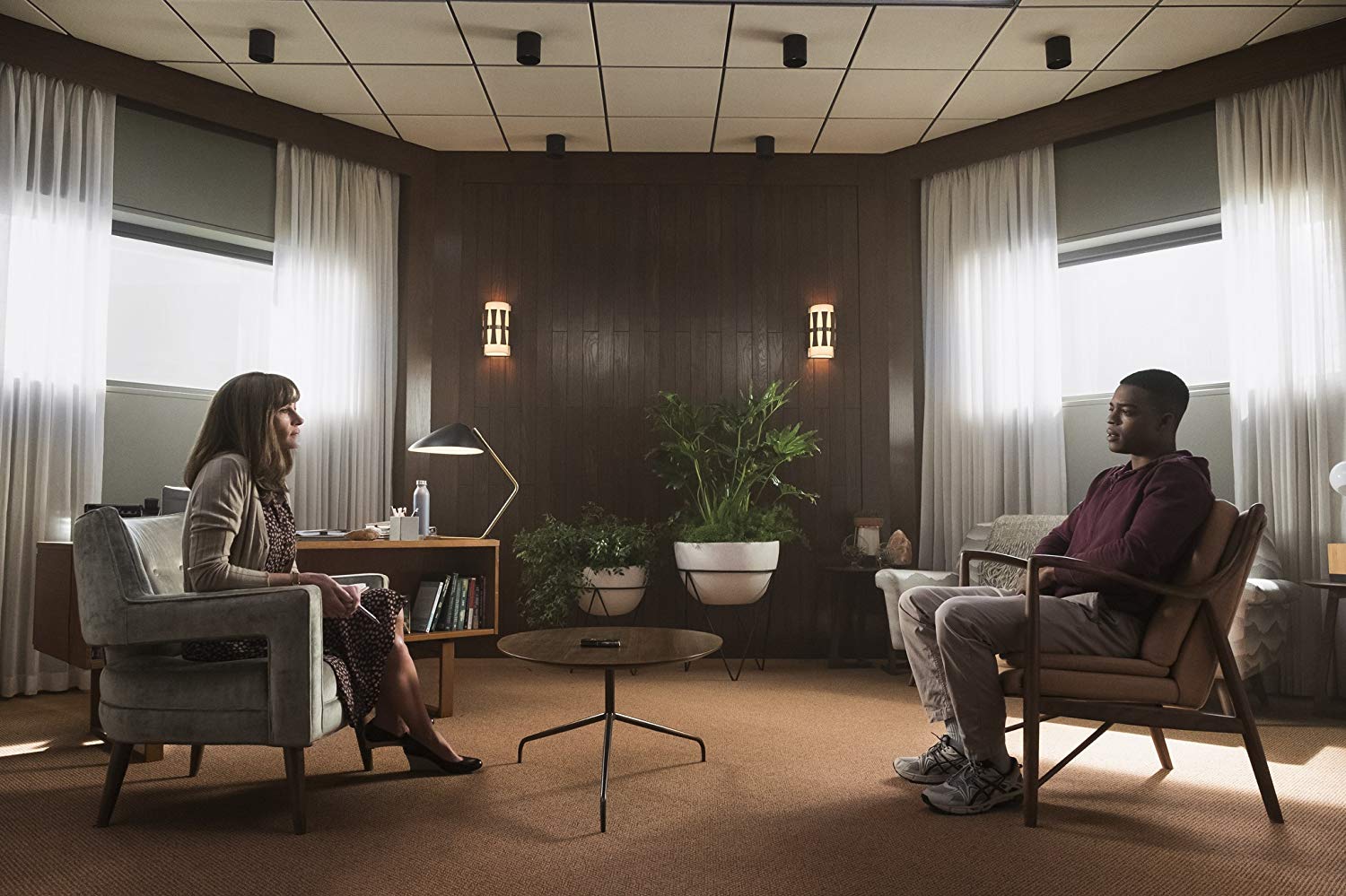 Each of the players does their part to build the mistrust, even as they make you laugh or encourage you to doubt their intentions. Roberts does her thing once again, giving us a full bodied character in Heidi, one whom we believe from the start. James is equally strong. There is something so tender and yet solid about his portrayal of Walter. His resilience becomes the one touchstone of trust in a series that banks on keeping you off balance. Bobby Cannavale is once again the seductive asshole as Colin Belfast—a man with all the fast-talking aplomb of a con-artist and guile of a seedy corporate executive.

Dermot Mulroney plays Heidi’s insecure ex-boyfriend, which gives the show the opportunity to turn gender norms and societal perceptions on their heads. The role reversal is skillfully executed, making you feel a sense of disquiet even while you quietly cheer. Nebbish DoD agent Thomas Carrasco (Shea Whigham), who is investigating GEIST and Heidi’s time at Homecoming, is determined to uncover the truth. Placed in a role that is traditionally given to women, and forced at one point to back down from his impatient, breast-feeding boss, he has nothing to go on but his instincts (but no one believes in those, right?). It’s thrilling to watch each character thrown out of their element and you’re left unsure of who is on the side of good, truth, or if those assumptions are all in their minds—or yours.