Basically: An angel and a demon team up to stop the Son of Satan from destroying the world…because they’ve grown rather fond of humanity (and its sushi bars).

If you’ve ever suspected humans are fundamentally screwed-up AND it all started in the Garden of Eden AND our bumbling is inescapable due to divine decree OR divine intervention OR by some other bit of divinely botched paperwork [insert deep breath here] then Good Omens is set to prove you right. Good on you. Inversely (or perhaps perpendicularly), if you’ve ever dreamed of an adaptation of Good Omens, the novel of the same name by Terry Pratchett and Neil Gaiman, then, yay, it’s the end of the world as you know it and you’ll feel fine.

It all begins (as you may have suspected) in that damned garden with the apples, and the knowledge, and the naked bits & baubles. There’s a serpent, whose name is CRAWLY. There’s also an angel with a flaming sword, whose name is AZIRAPHALE. Note: These two are also known in the eighth ring of hell AKA Hollywood as David Tennant and Michael Sheen (respectively)—although we fail to see how that’s important when the world is at stake. 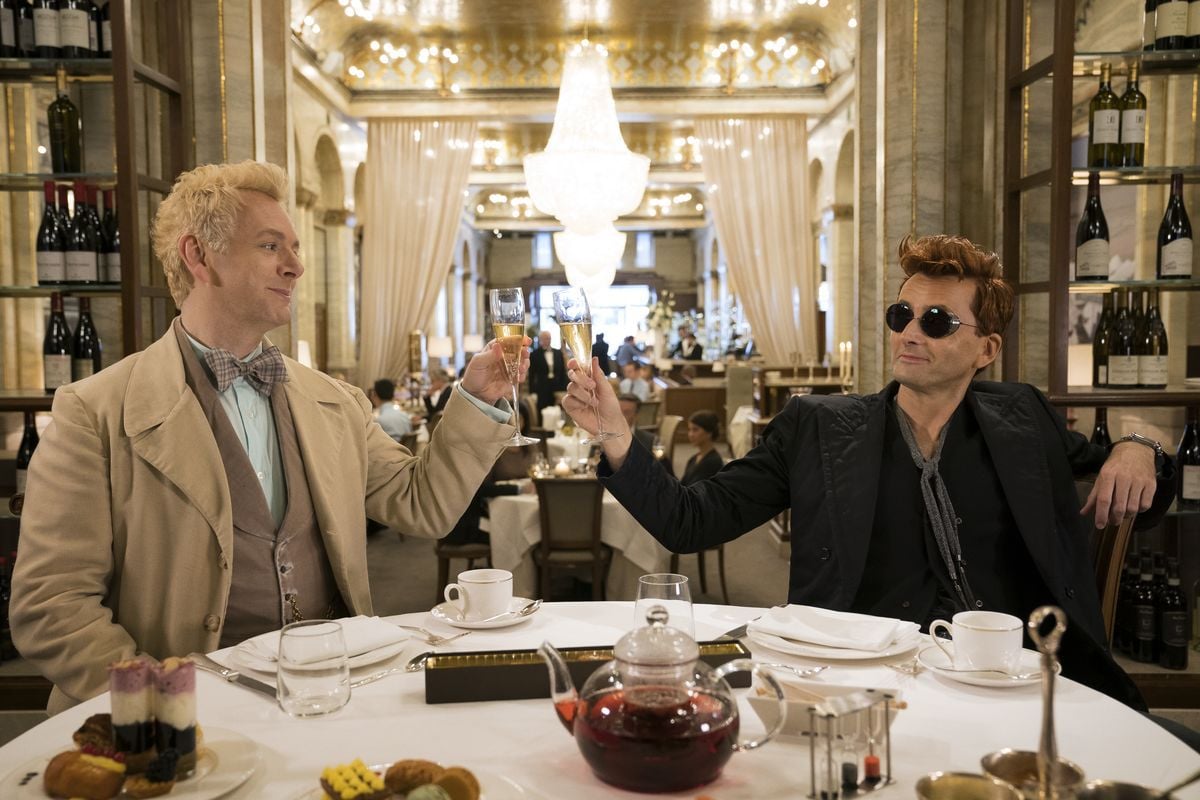 Back to the garden, mistakes are made by absolutely everyone involved—including the demon and the angel (well, mostly the demon and the angel)—and this hurls humanity onto an intractable collision course with ALL FOUR Horsemen of the Apocalypse* and also…the Antichrist. Who it should be mentioned is a rather charming 11-year-old boy named Adam Young (Sam Taylor Buck) who lives in the small English town of Tadfield (thanks to a domino chain of decidedly human mixups and one very silly nun). Think of this as a witness protection program, but completely by accident, involving only the most clueless agents of the over/underworlds AND as you can see we’re doomed. Isn’t that fun?

You have no idea how much fun Good Omens is…but you will on May 31st when Amazon and showrunner Neil Gaiman release their very own Armageddon onto the world. But be warned, the end-of-the-world simply cannot go “all to hell” without a fantastic cast of utter incompetents (yes, that’s a noun). First off, Crawly (AKA Crowley which is a much nicer name) is a leather clad, rock loving, snake-eyed devil, who is obsessed with life on earth—mostly due to the previously mentioned rock music but also Bentleys and cognac. Second off, Aziraphale is a fastidious powderpuff of the highest class who seems to be made entirely of white candy floss (cotton candy) and he’s arguably just as sweet. Aziraphale has grown rather fond of humanity because of the 4-star meals, and the walks about town, and the books (he owes a rare bookstore—that’s a pun btw).

Tennant and Sheen are perfection. If you need two actors to anchor your wildly absurd streaming series then these two are the ones to do it. And for the readers out there: When you’ve loved a book for many years, it’s difficult to break the story out of your imagination. Now we can’t imagine anyone else as our beloved devil & angel. The pair step seamlessly into their respective black or white suits, embodying both characters with the same obstinate and awkward friendliness that originally endeared them to us. Their comedic timing is delightful and they bounce off each other like they really have been kinda-sorta-friends for 6000 years…because of course they have. Haven’t you heard this is a reality series? It’s not by chance that Good Omens tackles the same social issues the book did back then in 1990, yet it remains just as relevant and hilarious. Subjects like bureaucracy, mobile phones, and organized religion are blasted open so we can see all the messy bits inside. 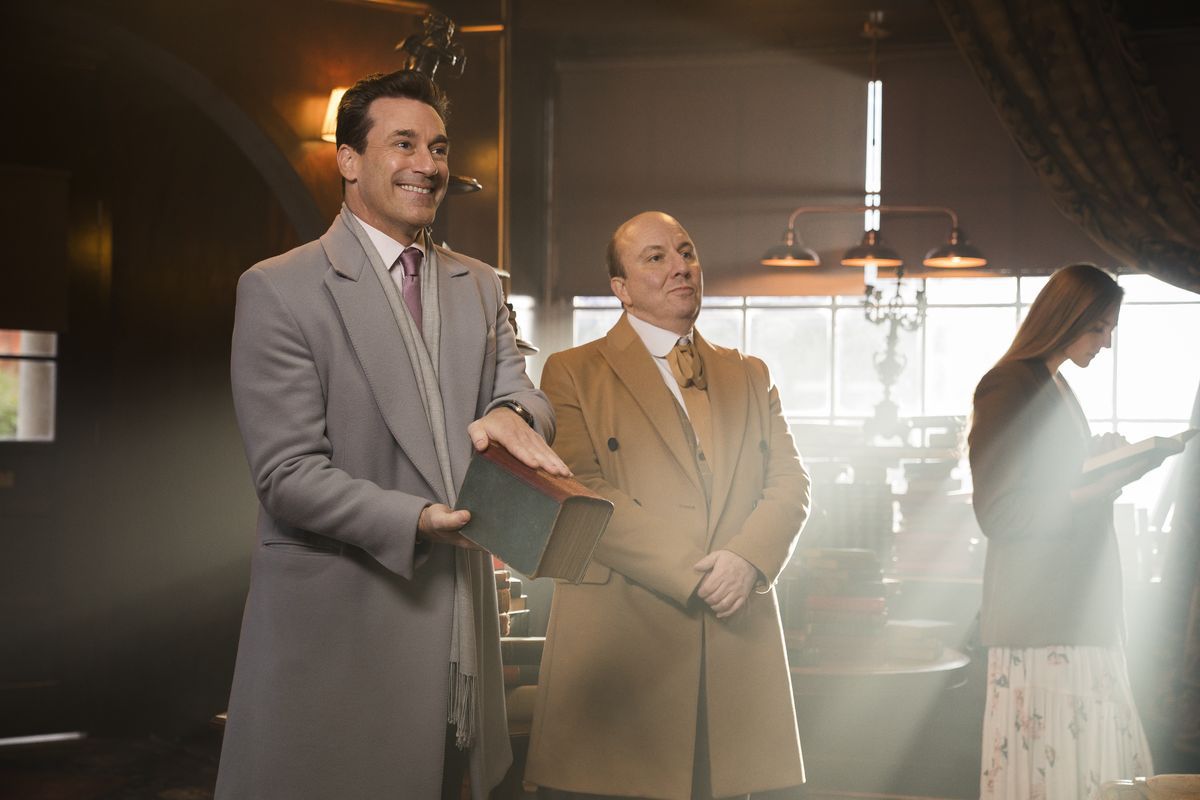 Back to the incompetents. The witch, Anathema (Adria Arjona), and the computer-technician-turned-witchfinder, Newton Pulsifer (English national treasure Jack Whitehall) are as equally inept as the demon & the angel. She is the slightly intense but thoroughly wacky descendent of Agnes Nutter, the greatest prophet of all time (seriously Nutter predicted that thing you’re doing right now in her book “The Nice and Accurate Prophecies of Agnes Nutter” so stop it). Of course, on her way to the destiny written in her family’s precious book, Anathema meets the hapless Newton and, ahem, the two make a sweet—if odd—couple that you’ll find yourself giggling at.

Perhaps the only four competent people are the eleven year olds (which makes total sense if you’ve ever watched a family movie or have ever been eleven yourself). Adam the Antichrist and his gang of friends are a joy to watch—Pepper (Amma Ris) in particular is fiercely precocious and could stop the apocalypse with the power of feminine superiority alone. Each of his friends are true blues. You’ll clearly understand Adam’s journey and why he brings them along for the ride. The opposing “gang” (which is a bit of an understatement) are the *Four Horsemen of the Apocalypse: War (Mireille Enos), Death (Brian Cox), Famine (Yusuf Gatewood), and Pollution (Lourdes Faberes) (who took over from Pestilence after the discovery of penicillin). While the introductory vignettes are visually fun, their story arcs don’t really progress beyond that. You’ll be left wanting more, wondering why they were such a threat beyond their names telling you so. Although his incompetence matches up to the rest, Jon Hamm’s Archangel Gabriel also feels a bit wasted. Hamm plays it with a mix of imposing power and his signature charm (we don’t know why his piercing purple eyes go so well with those gray sweats but it works for him) which leaves you wishing he had more screen time or at least more of a character to Hamm-it-up with. 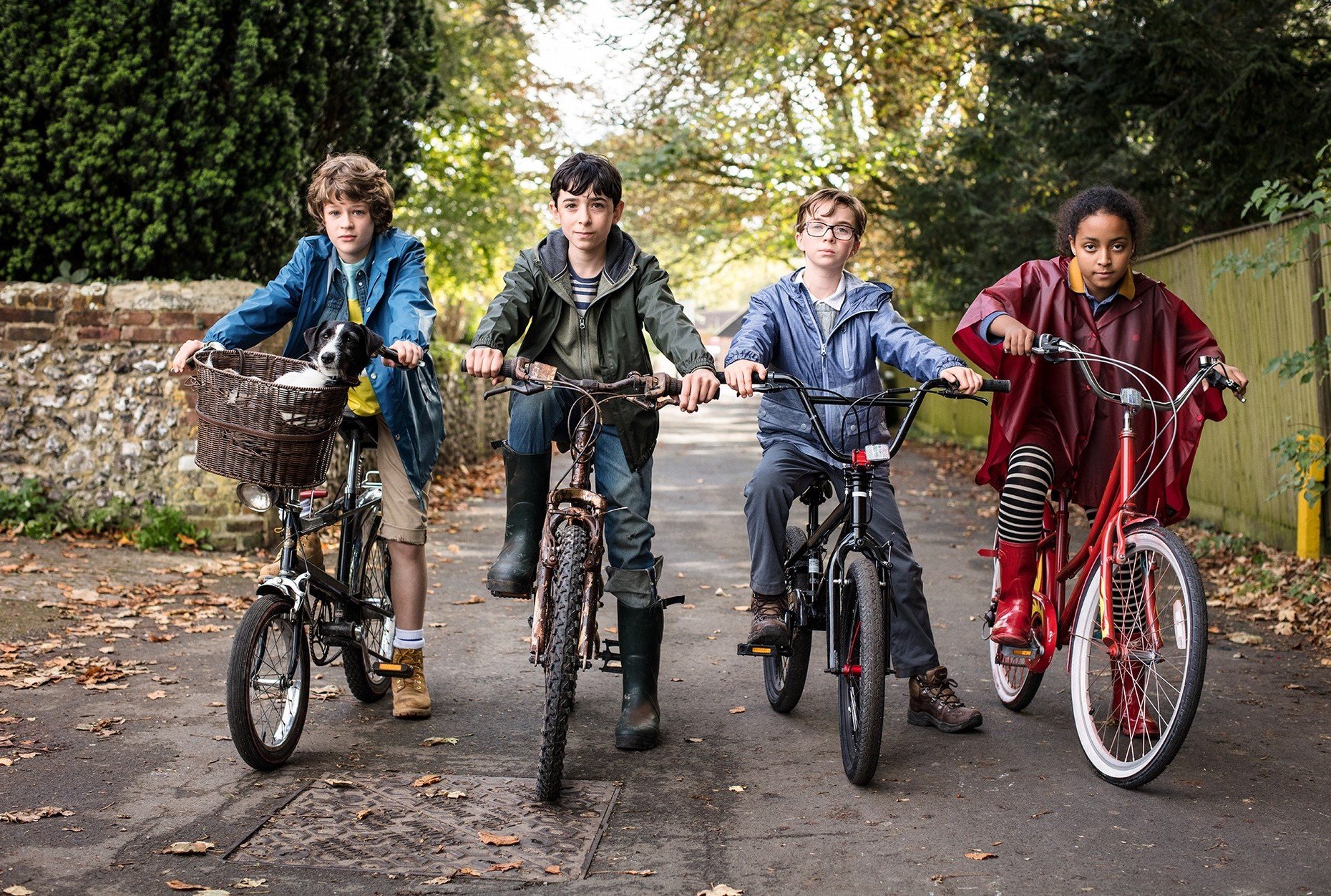 Good Omens is also very slowly paced—the six episodes take place over the course of a week—but although the players only inch closer and closer to doom, you won’t mind it. It’s too entertaining to watch the everyday worries of, y’know, the apocalypse vs. whether or not Crowley and Aziraphale can enjoy one last lunch at The Ritz as friends (are they friends? Cue the uhhhming and ahhhing). Also everyone but the two of them and, maybe, the Witch and The Witch-Finder, seems to be gunning for war. This complicates the plot with a multitude of players but the show takes its time with the secondary storylines so it all makes sense when everything comes together. As anyone who’s read Pratchett or Gaiman’s work will understand: The story’s true magic lies in the tiny whimsical details. Like how any music left in a car for more than a fortnight transforms into Queen albums. (Who wouldn’t want that? Especially when you end up with a soundtrack full of Queen while you attempt to save the world.) AND, not to mention the ridiculousness of it all, but it really comes together in some jaw-droppingly wild and winning ways.

In the End: Good Omens somehow makes you cheer for Team Four Horseman and their star player The Antichrist. Welp, we’re all going to hell…but we’ll be thriving for six six si…oh no, sorry, only six episodes!

Stream Good Omens on Amazon Prime on May 31st.