Basically: If I learned anything from movies it’s these three things:
If you’re ever kidnapped, call Liam Neeson.
If you need a quick getaway, call Vin Diesel.
Lastly, if it’s World War III, you better call Gerard Butler.

The Hunter-Killer attack submarines are high-end cigar shaped engines of super destruction, meant to travel the deep depths of the ocean to blow up more things than an Adam Sandler movie. In Hunter Killer the movie, we get an unseasoned Captain Joe Glass (Gerard Butler), whose job it is to investigate another missing Hunter-Killer submarine. However our Captain ends up diving into an international incident that could lead to World War III. As ridiculous as that may sound, thanks to Crimson Tide and The Hunt for Red October…seems legit.

This is one of those movies I wanted to enjoy and, by Neptune’s Beard, it didn’t disappoint. Like most souped up action, there is no pretense to this story. It’s a testosterone laden grunt fest of blowing stuff up or shooting it. It’s so manly, out of the four women in the movie, I believe only two had any actual lines. 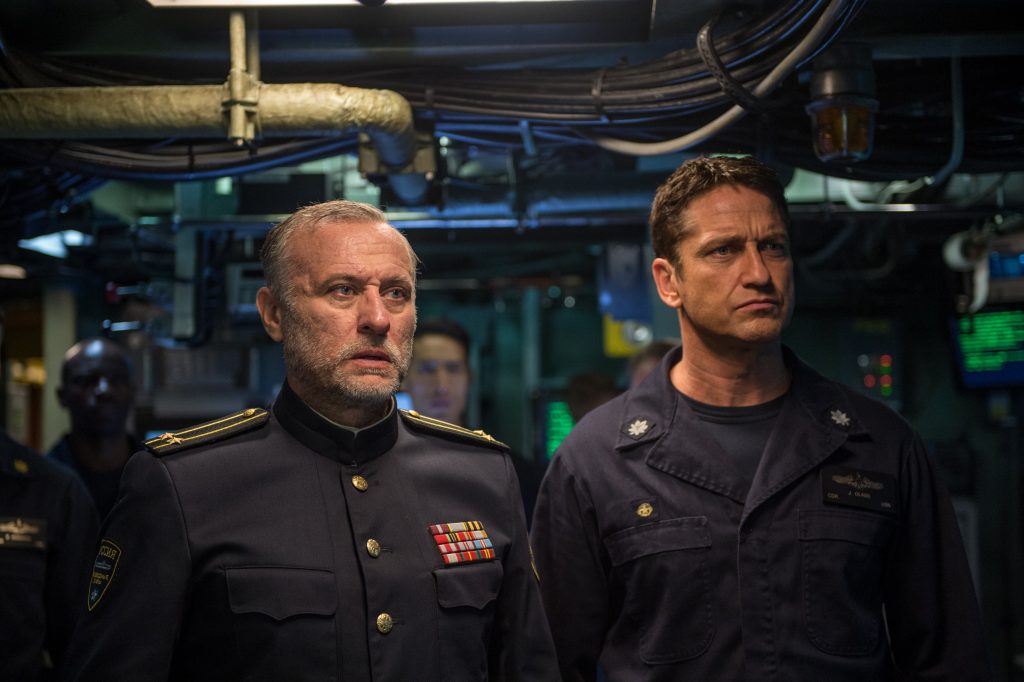 Gerard Butler once again plays an engaging character, despite what could be considered a less than innovative script, he uses his powers to draw you in. Thanks to a slow return to a Cold War with Russia, this movie hits all the triggers to remind us of all the things we love to hate about the evil empire. Oh, how the 80s movie fan in me misses chants of “Die, Ruskies”, “Better dead than red” and of course “Wolverines”. That being said, the film strives to show the gray complicated area of globalism, international politics, and nationalism—it might have been a valiant attempt had they taken time to stop blowing stuff up. However with this movie: Who cares! It’s been ten minutes since I left the theater and nothing has been shot or blown up and I am missing my Hunter Killer fix already.

Now, lest you think it’s all about Butler, he is flanked by a well-cast testosterone collective who help him ferry this film to its ultimate port of awesome. We have Rear Admiral John Fisk (Common) whose stern and silky voice is the wind in the sails that keeps everyone on mission. The counterpart to Fisk’s calm and reason is the warhawk Chairman of the Joint Chiefs Charles Donegan (Gary Oldman). His constant yelling and squawks of battle remind us war is hell and usually filled with the best intentions.

In the End: Hunter Killer takes you on a nostalgic and high-tech ride into the high seas of renegade Russian commanders and cowboy soldiers with a spicy dash of international intrigue that gives us an excuse to make nautical puns.