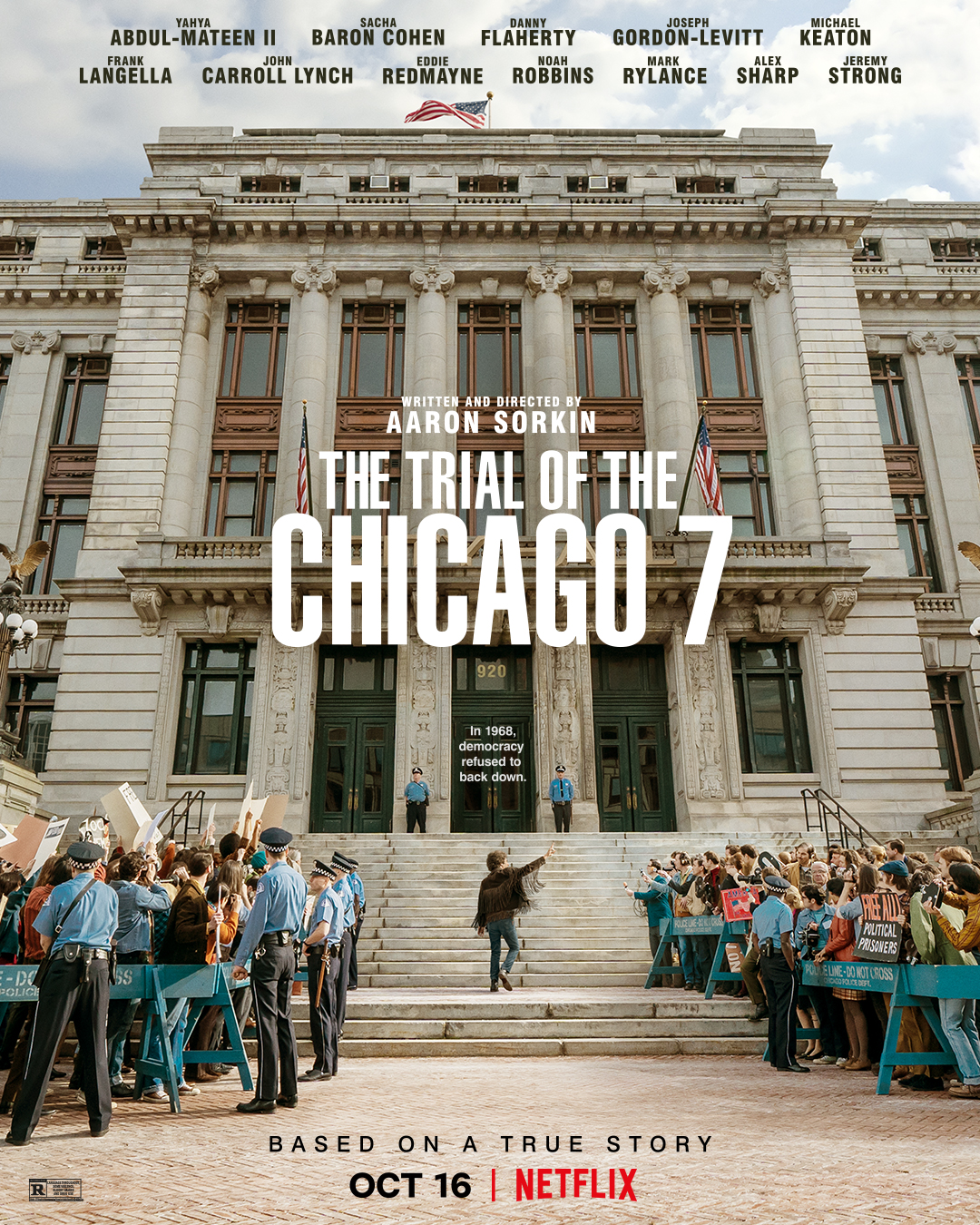 The Trial of the Chicago 7

Basically: A dramatization of the trial of the Chicago 7, including Bobby Seele. The year: 1969. The charge: Inciting riots at the DNC. The truth: Government oppression.

Man, what a time for this film to come out. There are so many things in this tumultuous year that feel perfectly made for this year. And, wow, this film, The Trial of the Chicago 7—after being in the works for so long with development troubles—hits at the right time. The film, for those who haven’t lived through those times or ever looked into the case, is about the men who were charged for conspiracy for riots that happened during the 1968 Democratic National Convention. That was a wild year with the assassinations of Martin Luther King Jr. and Bobby Kennedy, and it ended with Richard Nixon winning the presidency. A lot of the terms and ideas and battles we are currently seeing come from that time or are sadly just echoes of it.

What sells The Trial of the Chicago 7 is who made it and who’s cast in it. For the former, it’s written and directed by Aaron Sorkin, a person who has become so synonymous with screenwriting in the modern sense it’s almost funny. You know his style: people walking down hallways talking fast, super eloquently and smart as hell. The thing is, even though you can tell it’s Sorkin’s craft, since it’s based on real-life he’s able to capture the voices of the real people. He clearly drew quotes and truth from these men and the transcripts from the trial—every single scene draws you in and it’s mostly people in a courtroom giving testimony. His first huge hit as a screenwriter was A Few Good Men and here, again, Sorkin is in his bag; people talking completely captivates us. The direction is good too, even though there’s not a lot of camera movement or shots in this film. Those would most likely distract from the performances and the ones here are great. The cast is crazy with Sacha Baron Cohen as Abbie Hoffman, Eddie Redmayne as Tom Hayden, Joseph Gordon-Levitt as Richard Schultz, and Yahya Abdul-Mateen II as Bobby Seele. The stars ground the film with Cohen falling into his role, so while you know it’s him he does become Abbie. For me, it was interesting seeing Redmayne play a regular person from the States. He actually gives off Tom Cruise vibes that really come into play in the last act. JGL as usual becomes his character and is his usual greatness, even as the US Attorney who you can’t agree with in the narrative of the film. Yahya also brings in another banner performance. Possibly the best onscreen dramatic portrayal of Bobby Seele I’ve seen and is in it a lot more than I expected.

Sorkin doesn’t run away from race in this and it’s a connection to revolutionary movements and radical thoughts in the US. In that, Mark Rylance and Frank Langella both hold star performances together with singing character actor roles, playing William Kunstler and Judge Julius Hoffman, Langella will grind your gears, I swear you’ll want to throw something at your TV (or movie theater screen). There’s so much that can be said but at a point, it goes beyond a review and becomes a long essay on how much this country has and hasn’t progressed in the last 50 years. We’re still fighting the same fight that some people’s grandparents fought when they were in their 20s. It can be depressing but a well-made film like this can not only show you that the battles aren’t new but that they are worth fighting and what, I hope, leads people to research more history that isn’t taught. This might’ve ended
up as just a 10 minute part of a CNN documentary on a Sunday night. Instead, The Trial of the Chicago 7 is good and I expect it to get a lot of awards talk. Netflix has another strong one here and it definitely should be a must watch for you when it’s on the service.

In The End: A fire historical courtroom drama that’s going to have so many people feeling all types of ways about the past and present in the fight for rights in the United States, from politics, police, race, etc. or, you know, just another Tuesday.

Watch The Trial of the Chicago 7 on Netflix on Friday.