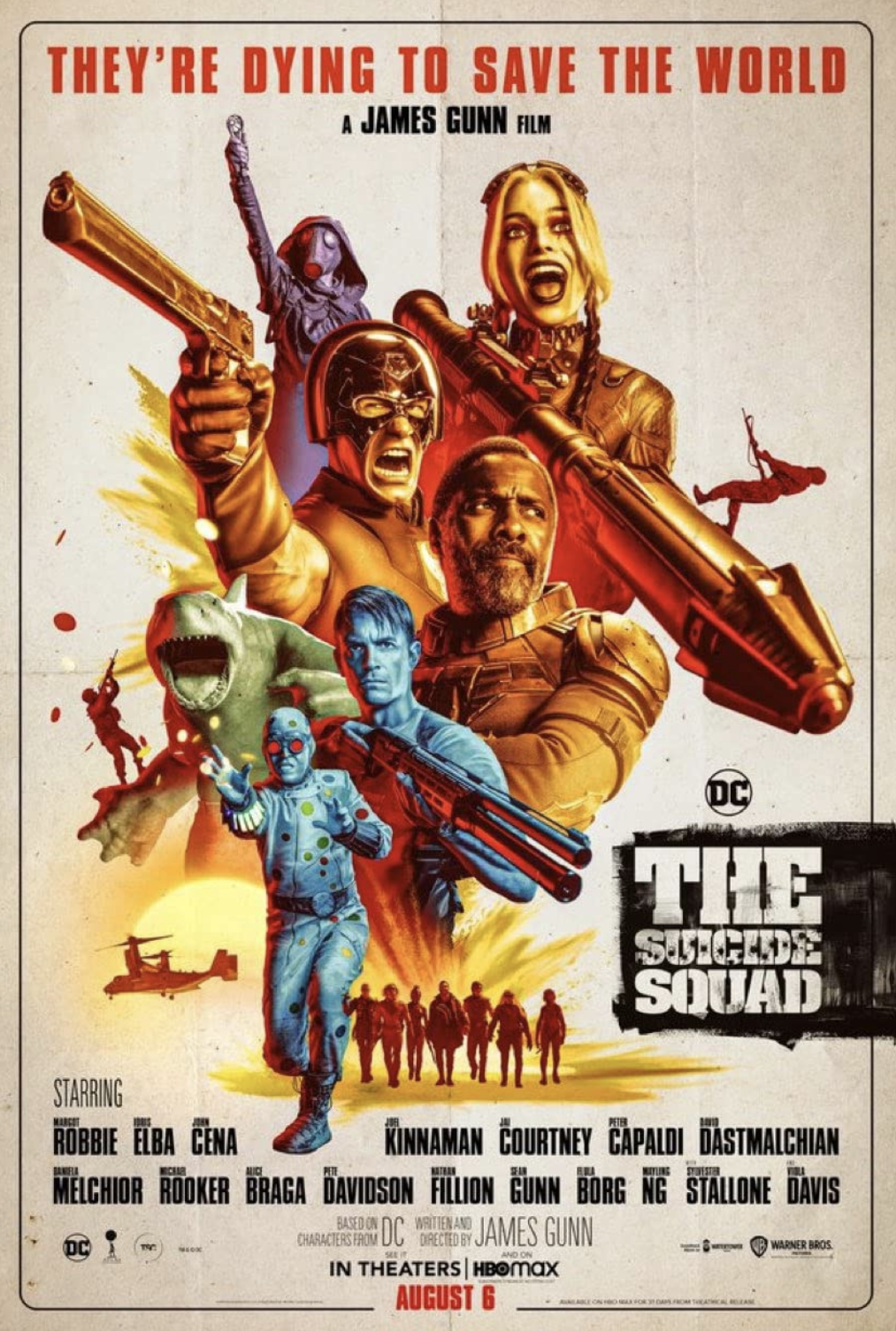 Basically: A jack-in-the-box style explosion of criminal madness. The Suicide Squad is NOT for kids but it makes you feel like one…a naughty one.

If you read idobi reviews regularly, you probably know I’m a DC Comics woman. It’s how I was raised: comic books, big action spectacles, martial arts, epic fantasy, opera… Yes, I’m a cocktail (drink me in). Annnnd back to DC Comics. It’s likely because I was raised on the Justice League and immersed myself in Vertigo Comics, in my artsy college years, that the DCEU has been disappointing in many ways. I’m not talking about the quality of the filmmaking, but about the quality of the presentation of its heroes. Are they heroes? Or are they a group of miserable bastards who would play well with The Boys? (You don’t have to answer that. I’m just pondering out loud.)

The DCEU is so good at turning its heroes into bad guys that this new movie about villains might be where it captures the essence of its characters best. You could call it a comeback or maybe an alternate timeline or even an “oopsie, let’s try that again.” Whatever terms you use, Warner Bros/DC has launched a new version of Suicide Squad, the team of raging scofflaws first created in 1959, but later perfected by writer John Ostrander and artist Luke McDonnell. Writer/director James Gunn takes command and while Harley Quinn (Margot Robbie), Amanda Waller (Viola Davis), Rick Flag (Joel Kinnaman), and Captain Boomerang (Jai Courtney) are back, we’re now rolling—literally—with Bloodsport (Idris Elba), Peacemaker (John Cena), Ratcatcher 2 (Daniela Melchior), and a CG King Shark voiced by Sylvester Stallone (no typo).

In classic Suicide Squad style, Gunn jumpstarts his movie at Belle Reve Penitentiary. And nothing will ever be what you expect it to be again for 2 hours and 12 mins. Nothing. Okay, there’s a mission and Waller is a cold-blooded liar. That’s about it for expectations. Seriously, even if you’ve seen a kaiju sized Starro (the alien facehugger villain) in the trailer, you have no idea the depths of the super slide of chicanery you’re going to be taken on to get there. You will frequently ask your movie watching partner if you are high. Alas, they will only giggle maniacally in response. And then you will realize, you are too. Other than a mission to stop the Thinker (Peter Capaldi) from taking over the world, funded by a really really ridiculously sexy despot (Juan Diego Botto), I cannot tell you anything about the plot without sounding like a lunatic. Don’t believe me? How about this? There is a preponderance of inexplicable peen in this movie. And I’m not talking about Cena in his drawers. Although I am available to discuss Cena in his underwear if you want to. I have large thoughts.

Annnnd back to The Suicide Squad. Since narrating the plot is tricky, let’s talk about why the movie works. Gunn brings narrative cohesion to the story and adds an emotional core. Something we didn’t get with the previous iteration and something that helps soothe your senses during the MAXIMUM CARNAGE. Blood, bone, and guts are everywhere. No one is safe. Which is the core conceit of a squad of villains, you can absolutely brutalize them without anyone feeling too bad. But Gunn does more than dig into who these characters are. He shows us their interior lives and how they see the world—not to strip their accountability but to help us understand they went bad for their own reasons. Another factor is how well the women are presented. Melchior’s Ratcatcher 2 is faceted and humane. Robbie is on a personal playground here. This is a better Harley than we’ve seen—excluding the fact most writers forget she’s a psychologist. Only Christina Hodson in her script for Birds of Prey utilized those skills. Still, great. Viola Davis does her thing and enthralls as a forceful and compassionless Waller. However, no one who has ever done a big screen adaptation seems to understand the Amanda Waller character. They confuse her with a villain rather than the by-any-means-necessary patriot she is. Batman has a similar problem, that kind of complexity is hard to capture in two hours.

Otherwise, y’all, the needle drops are insanely good and the performances are even more insane. John Cena has a gift for displaying opposing emotions with a single facial expression. It’s very clear why he’ll be leading a new Peacemaker series on HBO Max. Elba’s Bloodsport is a parallel, almost mirror, for both Peacemaker and Will Smith’s Deadshot. Elba is equally compelling, making for a strong lead you’ll want to see again. Let’s see if he lives…

Listen, I could go on for another page about this cast. Everyone shows up. So, allow me to encapsulate the movie like this:

The Suicide Squad is gleefully wicked, fabulously demented,
and gloriously gory–who knew villains could be this good.

In the End: What the hell did I just watch and when can I see it again!