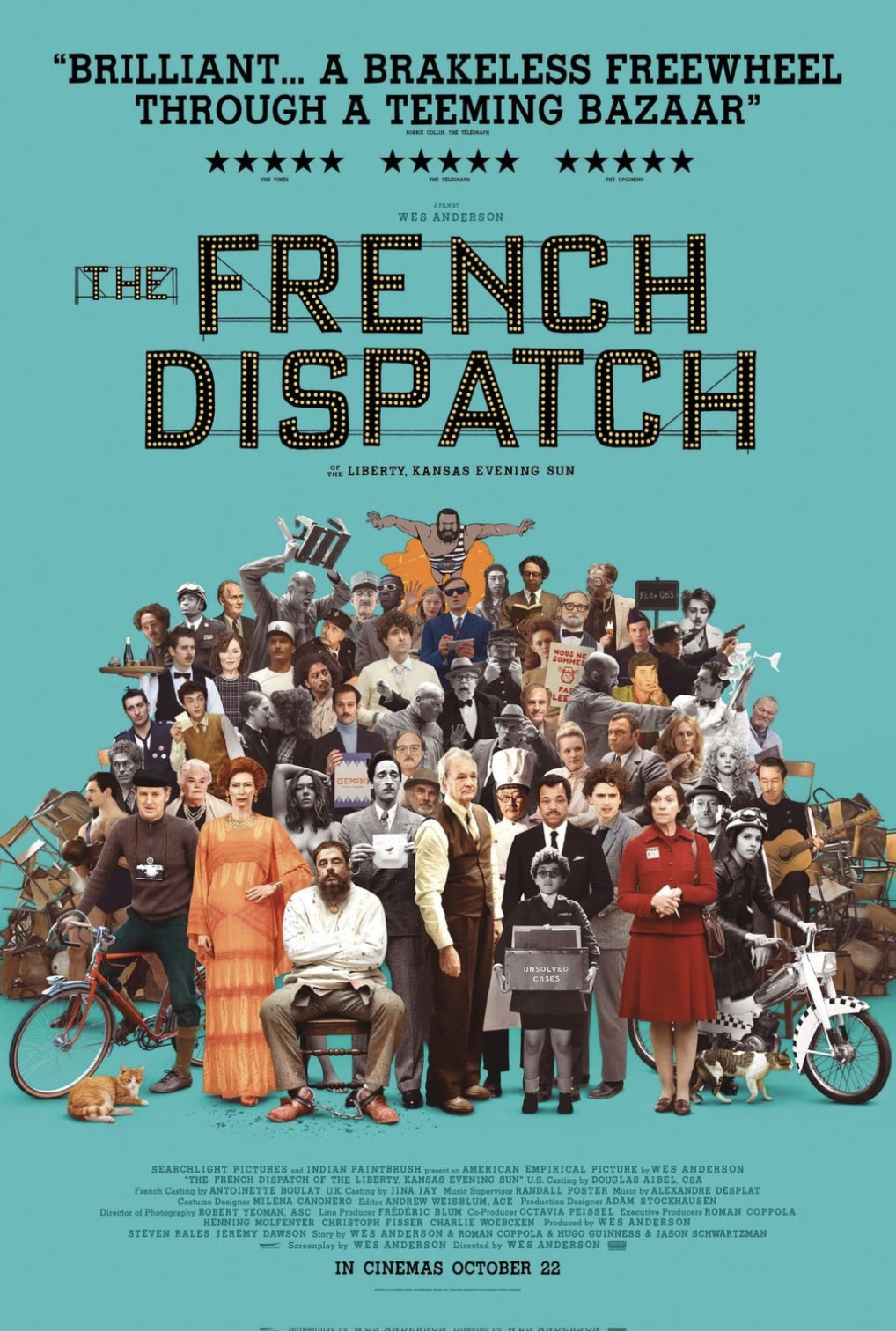 Basically: An old issue of the New Yorker but as a narrative film.

Oh, Wes Anderson—a filmmaker who has an easy-to-spot aesthetic. One where you see carefully crafted sets, use of tightly made color palettes, and tactile quirky craft-like sets and visual setpieces. So many of his films now feel like stories purposely made to look old yet feel new, like those illustrators who draw in the style of old Little Golden story books but on Photoshop. Anderson’s clear love of aesthetics and pastiche is something that speaks directly to this art school graduate. Yet I can see how it can turn people off. The French Dispatch is a film that very much triples down on Anderson’s style more than anything I’ve seen of his over the past two decades.

Anderson stalwart Bill Murray plays Arthur Howitzer Jr, editor of The French Dispatch, a magazine that’s an insert in a Midwestern newspaper. Based in a fictional French town, the film follows him and his staff as they produce articles for their final issue. The story is set up like the sections of the magazine, which is similar to the structure of The New Yorker. The film soon becomes more like an anthology of vignettes, including a short one with Owen Wilson—another Anderson regular—playing Herbsaint Sazerac, a travel reporter who works well to pull you into how this story is told. The French Dispatch really starts gaining steam with its story about Moses Rosenthaler (Benicio del Toro), an incarcerated artist and his muse AKA his prison guard Simone (Léa Seydoux). Tilda Swinton’s J.K.L. Berensen narrates this weirdly funny story about how the world fell in love with an artist while he’s locked up. There are some solid send-ups about the nature of art and the world that surrounds it. This is also the one section that really sends home the use of color to accentuate important parts of the story. As the film takes place in an ambiguous mid-20th-century world, a lot of the film is in black and white.

Anderson also uses scenes where the photos for the newspaper’s stories are “taken” but instead of actual stills, we see the cast standing still while the camera moves around the subject, which will remind you of the mannequin challenge from a few years back. This touch of surreality delighted me. With that being said, the storyline with Frances McDormand as Lucinda Krementz and Timothée Chalamet as Zeffirelli is cute but you can easily guess what’s going to happen. It’s able to give you that feeling of French New Wave cinema but the film starts to feel a bit flat here, even with the good performances on display. I especially liked Lyna Khoudri as a rebellious young woman named Juliette. Khoudri was able to show so much spunk.

But there was one section of The French Dispatch I was enchanted with most and I think it’s because of who it focuses on. Jeffrey Wright plays Roebuck Wright, a kind of James Baldwin analog who is writing a cuisine article on a cop chef in the city. I think the appeal is watching an actor I’ve never really seen in a Wes Anderson film before. It brings a freshness to his usual troupe of actors. The film even plays with animation in this storyline in a style that reminds me of Adrian Tomine, which is a nice surprise. As you can see I really vibed with The French Dispatch.

In the End: Wes Anderson is Wes Andersoning here a lot but the story’s charm and the actors really make this one an enjoyable film. Also, it’s perfect for The New Yorker fans.