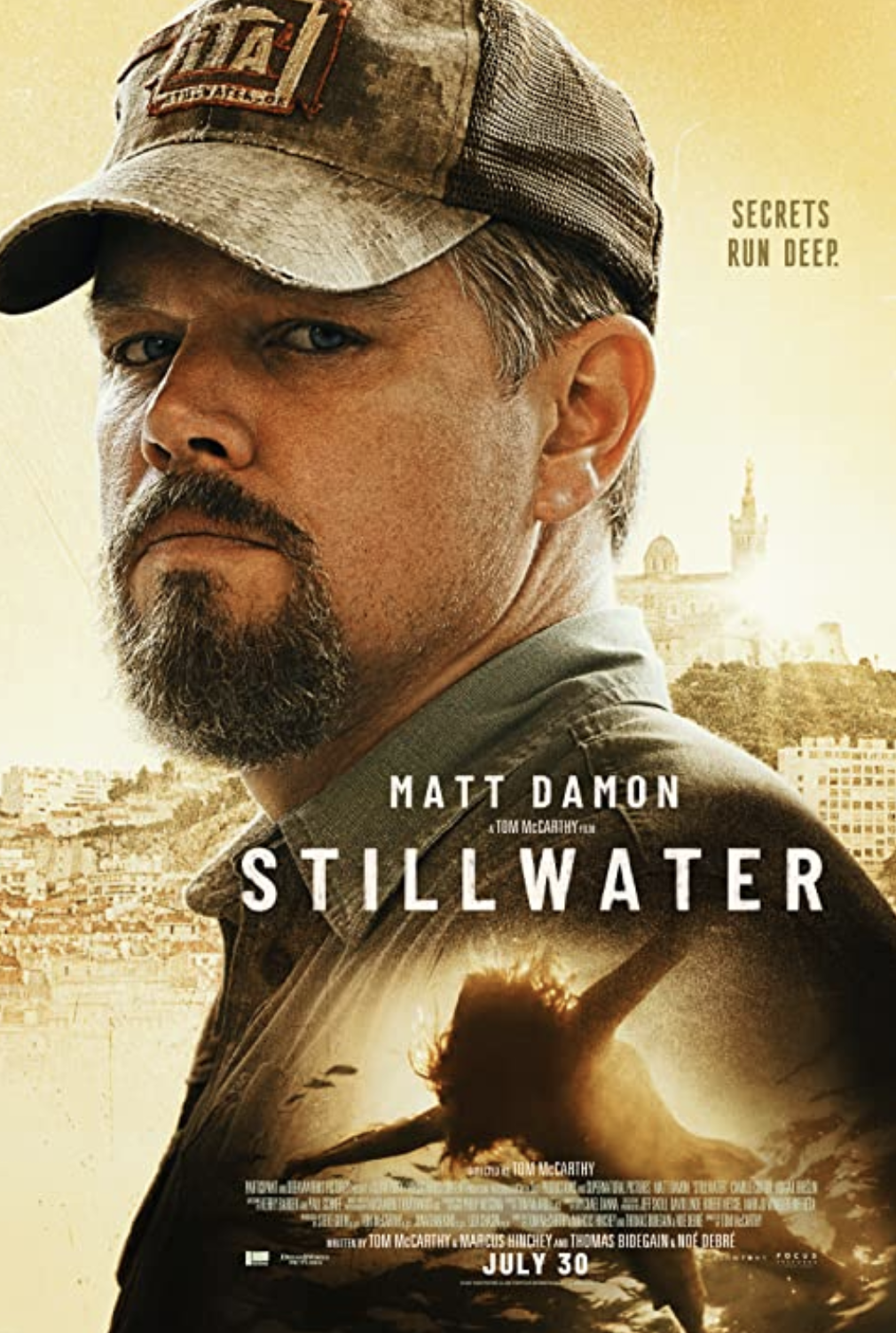 Basically: A movie about an American man trying to help his daughter deal with a European country’s legal system.

Stillwater is a weird film. It feels like director Tom McCarthy wanted to make one film but then, for a large portion of it, made another that he liked more. The movie stars Matt Damon as a regular middle-aged white man named Bill Baker who’s down on his luck. Bill is from Stillwater, Oklahoma and he has a daughter, Allison (Abigail Breslin) who’s currently in prison in Marseille, France for murder. He doesn’t have a great relationship with Allison but he goes to visit her and tries to help her get out of prison even though she doesn’t have faith in him. While in France, Bill meets an eight-year-old girl named Maya (Lilou Siauvaud) and her mother, Virginie (Camille Cottin). Here the film starts to shift as Bill’s connection with them grows. Stillwater gets more interesting and delightful in the middle section as it attempts to become a French inspired romance film with Bill, Virginie, and Maya forming a family. All the performances work well here and the chemistry between Damon, Cottin, and Siauvaud is great…but then the film gets back into what brought us here to begin with.

All the actors are good and fine to watch. Damon has an accent and he does stuff with his eyes reminiscent of Tom Hanks when he plays a man like this. The problem is, there are times when Bill Baker feels like a cipher to a degree for “HERE’S A WHITE AMERICAN DUDE IN FRANCE” before he becomes a real character. Then there is Breslin’s Allison—it’s hard to care for her and you think maybe she should be in jail. The film also tries to show that in France, people deal with many of the same things Americans do in regards to racism and the clashing of ideas. Damon’s Beker doesn’t have this problem because, while he looks and sounds like a “Trump voter,” he doesn’t vote because he can’t. He’s a man with a past so the film skirts around what he believes beyond saying grace, praying to Jesus, and getting his daughter out of jail. That could have been one feeling to dig into but personally, I just wanted to see more bonding of Baker with the mother and little daughter.

McCarthy does a fine job with some shots of the Marseille landscape. The views show off France’s beautiful blue ocean and amazing sunlit skies. The camera movement isn’t distracting and you’re never confused with what you need to focus on. If it didn’t have such a sketchy ending I think this film would have made some of its points in regards to Baker’s choices—and how the story connects to his daughter—better to make a grand epiphany but instead it takes a bit of a messy, easy route.

In the End: Stillwater is ok for a serious drama, something for “adults” to watch but not be blown away by. This won’t be talked about at the end of the year but it’s still a likable film.