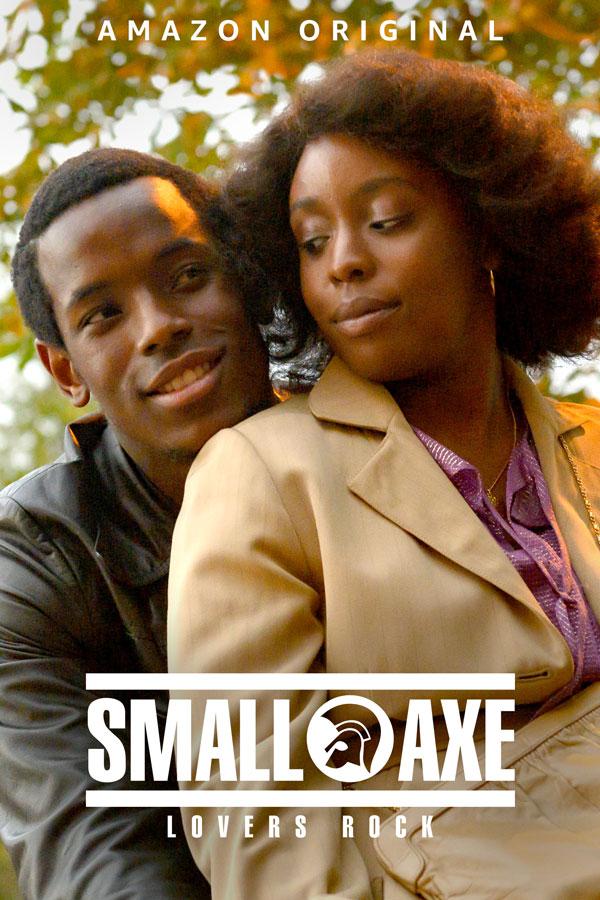 Basically: Black joy is in the house and it sings!

What do you know about ‘Black joy’? If you’re part of the culture you know it as intimately as your next breath. If you’re not, movies haven’t shown you much of it, maybe you don’t know it’s real. Either way, sit back, light a candle or some good smoke (whatever your inclination) and revel in the joy of “Lovers Rock”.

The second in the Small Axe series, streaming on Amazon Prime, is a bit different. Rather than focusing on a true story, “Lovers Rock” gives us the realness of a time and of a sound. The title comes from a genre of romantic reggae, popular in the 80s, and the story is an abstraction of the music—a night of romance for two youths (Amarah-Jae St. Aubyn, Micheal Ward), while the tunes intensify the feelings. Co-written by Steve McQueen and Courttia Newland, and directed by McQueen, the film is full of the bittersweetness of life. It takes place at a 1980s house party. Over the course of one night, McQueen & Newland somehow capture every facet of British West Indian life—in that time and beyond: There are the older ladies singing in the kitchen, their voices ready to break glass as they warble in the key of Aunty. There’s the hair floating out of an Uncle’s ears (the very uncle, Dennis Bovell, who produced the song of the night). There are the young women who kiss their teeth when the boys get out of hand (and the boys always get out of hand, but they come through too). And there’s the bike ride that feels like falling in the best way.

The production details are equally alive: the lighter hardwood where the rug was, the shit talking, the skin made glossy from sweat, the condensation on the walls. And the way we all sing in one voice when the DJ plays that one song. “Silly Games” is that record. When the music drops out and everyone on the dancefloor sings it—with their eyes closed and their bodies swaying—it’s church.

It is impossible not to get sucked into it all. This is the slice-of-Black-life we’ve been waiting for. It’s not about trauma or racism or betrayal; although those things are present they are the seasoning, not the dish. It’s easy to see why Martha (Aubyn) and Franklin (Ward) fall in love but how it happens is the fun of it all. “Lovers Rock” sings. It is a love song dedicated to life lived in the fullness of a moment, sung with swaying hips and pulses beating loud. Hard times and good times converge in the dim, golden lighting of that house party and the truth about our lovers spills out into the night. This is a film made not to watch but to feel.

I have it on good authority the floorboards on set were not ready for the celebration of “Lovers Rock”—neither are we but we need this food for our souls, especially during yet another lockdown. On one side, McQueen, Newland, and all the creatives behind “Lovers Rock” seem almost cruel for making us miss hotbox parties, where the walls sweat and we trade our chill for pure emotive movement. On the other side, we should raise our glasses to them for transporting us into this exaltation and for giving us hope we’ll be back there again—‘soon come.’

In the End: Push the furniture to the walls, roll back the rug, and let’s dance with our whole selves—this is Black joy. Feel it.