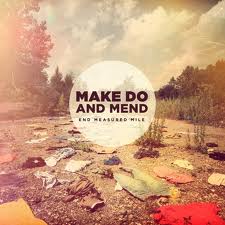 Not very often does an album or band hit you like a tornado upon first listen, and End Measured Mile by Make Do and Mend does just that.   This album was released on October 26th of 2010 but was recorded this past July with co-producers  Nick Bellmore (Hatebreed) at  Dexter’s Lab in Milford, CT and  Jason Maas (Bane, Title Fight) at  Getaway Group studio in Wakefield, MA.

Make Do and Mend originally called Hartford, Connecticut home but have relocated to Boston, home of another punk band and label mates with hardcore influences, A Loss For Words.   This band could simply be classified as hardcore or punk but that would be a swing and a miss.   There are elements of At The Drive-In (“Ghostal”) and classical nuances littered throughout the record.

The dual guitar crunch provided by James Carroll and Mike O’Toole that opens “Unknowingly Strong” comes to a head merely one minute into the record.   Vocalist Carroll begins to growl the lyrics “Believe me when I say / there will always be cold days / but the grass is only greener here if you plant it that way”.   The abuse that he puts his vocal chords through does not stop until he finishes screaming the final words of “Night’s The Only Time of Day”.

Carroll’s lyrics range from the drains of isolation to the trials and tribulations of being in a touring band on the road, and all of his passion is completely apparent across the ten tracks of this debut album.   What certainly stands out and cannot be ignored is the intense drumming of Matt Carroll throughout the album, without remorse.   His energy does not dissipate, and only seems to grow through tracks such as “Oak Square”, “Transparent Seas” and “Firewater”.

Beyond the basic tools of punk rock that are so eloquently utilized, there is a hint of violin and bag pipe on the aforementioned “Firewater” that add a whole different dimension to define this as more than just another punk album.   The call back of lyrics “I spent my night sweating through my clothes / and scream until my throat / makes like burning coals / still its not right now that everything I know / gets caught between the gnashing teeth of the hype machine” during the final track to from “For a Dreamer” are a treat for the listener who has a keen ear and spins the record more than once.

“Our biggest goal in both the writing and recording of  End Measured Mile was to grow as musicians and create a record that was a marked progression from our last EP,” says Carroll. “In our opinions, we succeeded with flying colors.”

This band comes together as one cohesive unit and presents a powerhouse of an album that seems to be a preview of the potential that this band has.   You will be hard pressed to find a more honest album released in 2010, save for The Upsides.   With a full-length debut in the review mirror, Make Do and Mend are on the verge of big things.   Check them out in the beginning of 2011 on separate tours with Fireworks and The Wonder Years. (4.0/5.0)

A Loss For Words – Returning To Webster Lake: Album Review

Make Do And Mend – Everything You Ever Loved: Album Review