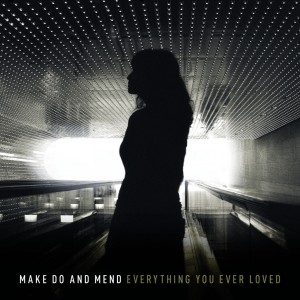 With the release of their second full-length, Make Do And Mend have avoided the sophomore slump and come out with an impressive and massive-sounding album. Everything You Ever Loved sees the band expanding their sound while still keeping the heavy emotion always found in their music. Although some of the abrupt aggressiveness from past material may be gone, the tracks still have that raw feel fans are looking for.

Opener “Blur” truly sets the tone for the record with melodious layers and lyrical references tying back into the album’s title. “Disassemble” and “Count” have a more straightforward rock sound to them, the former calling to mind the Foo Fighters, while “St. Anne” is a heartfelt song that could easily be used as music for one of those closing montages at the end of a CW drama.

The lyrical content of the album relies heavily on despair and being away from home, especially evident on songs like “Stay In The Sun” as singer James Carroll croons, “You can click your heels until you wear holes in the floor / And realize that no place feels like home anymore.” The lyrical prowess also shines on “Storrow” with lines like “Do you still thank your lucky stars? / Count your blessings and shuffle your cards / Cause the lights in the sky are just planes flying over our heads to Sky Harbour,” a nod to the legendary Jimmy Eat World, whose influence can be heard all over the album.

“Hide Away” and first single “Lucky” are faster-paced tracks more along the lines of the band’s past material. Of course, there are some new elements to be found in the album – “Drown In It” and “Desert Lily” feature the accompaniment of classical strings. The latter is a melodic tune focusing on the struggles of a long distance relationship – and it’s probably one of the best songs the band has ever written. From the second it opens with “Take me somewhere where the summer never ends / And we count the seasons by the corners of your bed,” the listener instantly gets drawn into the wistful feel of this fitting closer.

While Make Do And Mend may not have set out to reinvent the wheel with this record, Everything You Ever Loved definitely stands out amongst other releases so far this year. It’s one of those albums that can be listened to over and over and you’ll find a new little something to love every time. The sentiment of the lyrics matched with the intricate instrumentation come together for songs that are relatable and sonically beautiful.