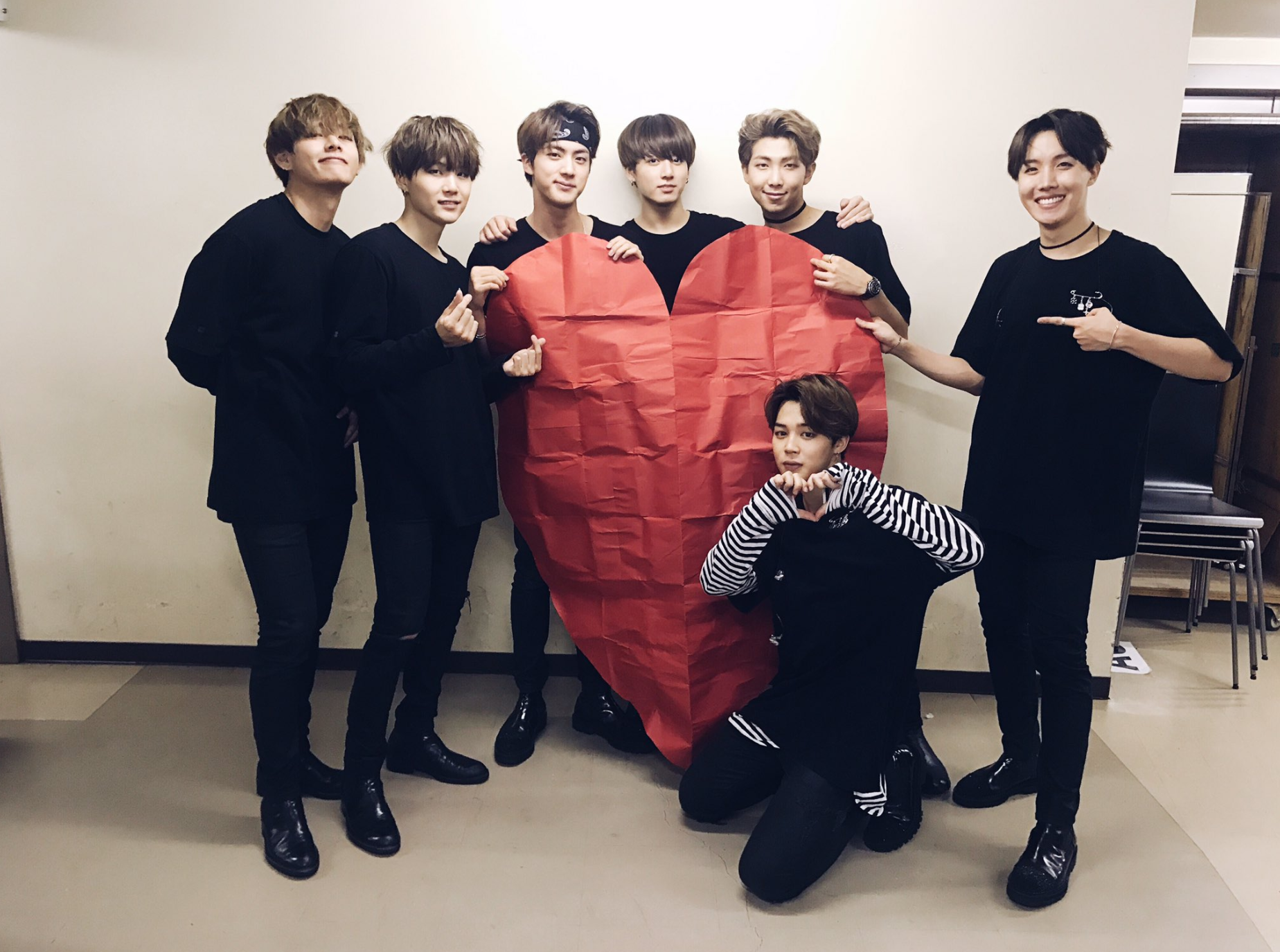 Brace yourselves, America, because Bangtan is coming back and it’s going to be big! REALLY BIG! LOVE YOURSELF: ‘Her’ is coming! I can honestly say that I have not been as excited for an album to release since Michael Jackson’s Thriller back in 1982. Yes, I’ve now dated myself. That being said, my excitement proves that BTS’s movement has reached far beyond the once targeted teenage/young adult demographic. With the gentlemen’s growth on the Wings/You Never Walk Alone albums, ARMY is now made up of men, women, young and old from near to far. In other words: ARMY is like no other because BTS is legendary. The boys will be coming back with a new concept, branding, and lots of appearances, like being special guests at Seo Taiji’s 25th Anniversary Special on September 2nd, where they will perform several songs including their cover of “Come Back Home”.

With a deal through Amazon BTS has launched their first ever album pre-order in North America; I secured my copy as soon as the news was released. Being able to have the actual CD in hand has American ARMY very happy! No more importing…or the standard digital download. The pre-order includes a 100 page photobook, stickers, a poster just to name a few…this = AWESOME!! Okay, I’ll name them all: 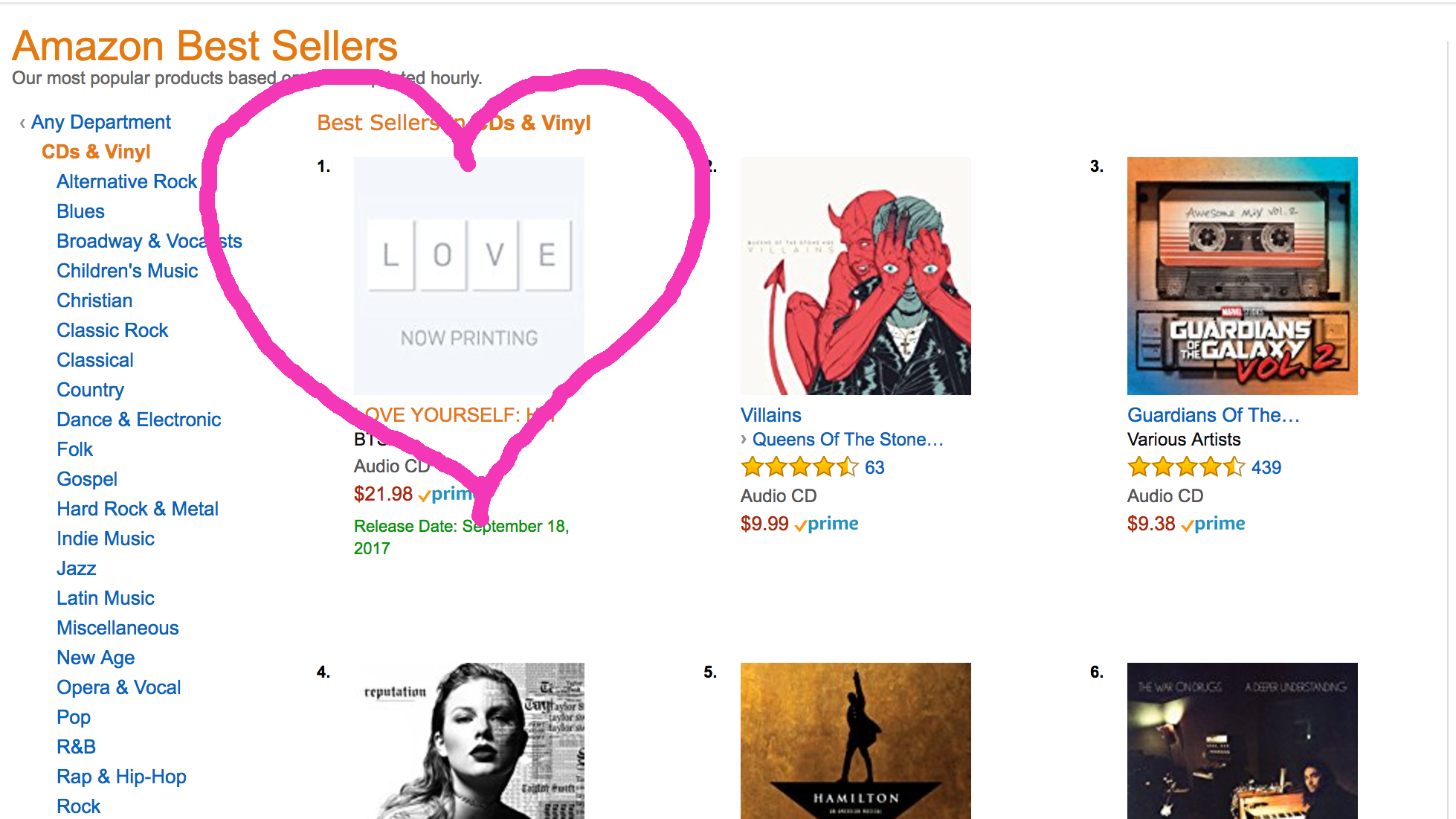 I have a theory that LOVE YOURSELF: ‘Her’ is the first mini album in a 4 part series. So why does Amazon’s album display “LOVE Now Printing“? Are they letting ARMY know that the love BTS is about to shower upon the world is currently in production? Or is there more to it?  What’s the message? LOVE HER?

Under my theory, LOVE YOURSELF: ‘Her’ could have 4 different albums with different inserts or cover art, one for L, one for O, one for V, and the E…or each letter L, O, V, E could contain its own songs and each mini album would be released through to 2018 leading us up to the release of a drama??? If we combine LOVE YOURSELF: ‘Her’ + Highlight Reel could the songs of the album be the soundtrack to a BTS mini drama???

Big Hit are masters at marketing. This bit of mystery keeps fans coming back and completely engaged. It’s brilliant, going back to the BTS appearance here on the Billboard Music Awards—there was a bit of mystery surrounding these 7 guys. Mainstream America was left wondering: Who are these guys and what’s with all the hype? People started to take notice and with a little Google search discovered something new…something fresh…and then ARMY grew and is currently growing. There’s no doubt about it, that the “LOVE” between BTS and ARMY is “IN PRINT” or in the making…just growing and growing.

So once again, Big Hit and BTS have left us hanging on a concept:  #LoveYourself. At the BBMAs Rap Monster reminded us to “Love Myself, Love Yourself,” little did we realize they’ve been telling us that for sometime now. Just take a listen through their catalog leading up to ‘HER’…it’s there…A LOT!  Army knows there’s a story—a message, one that’s being told over the course of time through the release of music, videos, portraiture, and mysterious posts. Not to mention the amazing Highlight Reels that turned ARMY into full-blown investigators and theorists. (Hand Raised, I’m guilty—I’ve got 5 typed pages worth of theory.) BH/BTS are brilliant! They have us all engaged and excited, wondering what we should expect through to 2018.

How will the story unfold? To have a complete understanding of the power of Bangtan you have to go back to the beginning, that’s where the story and their message begins. Everything is perfectly weaved together to bring us this amazing story of sacrifice, determination, friendship, love, hate, loss, and finding oneself.  Forging on without losing that one element we so often forget…ourselves.  How do you find the path to “LOVE YOURSELF” when you are struggling?  Bangtan is about to show us the way!

5am EST on September 18th, simply can not come soon enough.  With the release of LOVE YOURSELF: ‘Her’, I just know our ears will be graced with more powerful and special messages from BTS.  Not to mention a “hidden track” written and produced by Rap Monster.  Oh and ‘HER’ is the first in a four part series—I wonder what the next release will be…HIM? Then possibly, ME? YOU? US? Are the Highlight Reels about ‘HER’? Is ‘HER’ all ARMY? I’m not sure…BUT I’m incredibly curious what ‘HER’ role is in this new concept and how BTS will help ‘HER’ #LoveHerself.

One thing is for sure, ARMY is definitely showing the “LOVE” because BTS is currently killing it on Amazon.  Be sure to only purchase your copy from the link provided by BIG HIT. This will ensure each copy is counted toward Ganon and such.