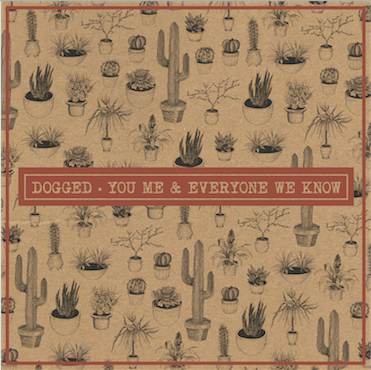 When You, Me, And Everyone We Know announced an indefinite hiatus in 2011, resulting in every member leaving the group except vocalist Ben Liebsch, many thought it was the band’s definitive end. But, Liebsch proves skeptics wrong with Dogged, the band’s first release since 2013 (aside from their surprise EP, A Mutty Christmas, released last year) with a brand new lineup. Aptly named “dogged,” meaning to have tenacity and persistence, the creation of the EP certainly took plenty of both, as Liebsch alone managed to keep the band name afloat while dealing with struggles of addiction. Today, with nearly four years of sobriety under his belt and a new record deal, Liebsch is determined to reaffirm YMAEWK’s place in the punk rock world.

Opener “Raise Them Bones” is characterized by punchy guitar riffs and gang chants, building up to an immense crescendo a mere 57 seconds can hold, leaving you wanting more. The EP takes a more introspective turn with “Does It Amaze Thee,” as Liebsch asks, “Am I just hyper motivated or a masochist? / I’d take a tub filled with bleach over a life with this.” It’s easy to see that he’s poured all of his emotions and fears into the record, coloring darker undertones in his struggles finding the purpose of life.

Musically, Dogged feels like YMAEWK never took a break, with all of the gang chants, escalating guitar riffs, and Liebsch’s own personal brand of both humor and plain ol’ weirdness that feel like a throwback to the 2000s. As a whole, it’s a cohesive record that keeps you captivated with its own unique brand of upbeat cynicism, and lyrics that will make you both want to dance along to the beat and contemplate ways to change for the better. Songs like “Eat My Hands” and “Brooks Was Here” exemplify this, starting off more slowly than the rest of the EP until an infectious beat catches on steadily. Things are taken down a notch with “A Pleasant Bummer,” a stripped-down acoustic ballad with wistful lyrics, attesting to how Liebsch matured as a songwriter over the years.

In just six songs, YMAEWK manage to capture the essence of growing up without becoming cliche or overdone. The record lays out Liebsch’s hopes and struggles in a relatable way, offering solace in a reminder that you’re not alone. Not only is the lead singer picking up where the band left off, but he’s also ringing in a new era, and from here, YMAEWK are bound to go far.

Buy It, Stream It, Skip It: If you’re looking for the perfect coming-of-age soundtrack, buy it.