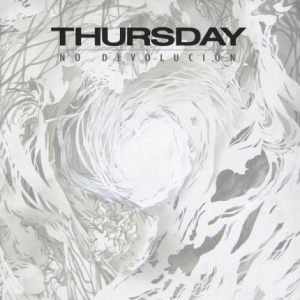 Even though No DevoluciÃ³n starts off with the urgency that we have come to know from Thursday over the past 13 years, it is quickly apparent that this album is much different.   This New Jersey sextet has transformed its sound, but it has not taken place overnight; every release is an evolution of the Thursday sound.   This band has come back from its third straight visit to the Billboard Top 100 albums chart with its most experimental and impressive effort to date.

By the numbers, the experimental nature of this album is clear with 12 songs clocking in at 53 minutes, with a majority of the musical landscape being occupied by spacey keys and ethereal effects.   If Thursday were ever going to be compared to Pink Floyd, it would have to be on the almost wholly instrumental track “Empty Glass”, which consists of mainly an organ and percussion.   But just when you think these guys have gone off the deep end, you have to remember that the aforementioned track is sandwiched by “Magnets Caught in a Metal Heart” and “A Gun in the First Act” both of which attack the listener’s senses with no remorse.

A City By The Light Divided was a drastic change in direction to alternative rock from the post hardcore perfection that was War All The Time.   Common Existence strayed back towards the old school Thursday sound and can easily be compared to the path that Thrice traveled between Vheissu and Beggars.

Geoff Rickley’s vocals cover the spectrum; from talking over the grandiose music, to a screech during “Millimeter”, to a soaring serenade that throughout most of the album that absolutely sets the standard that the instrumentation has to live up to.   It seems as if he is trying to sing through a wall of sound that has been carefully constructed around him and does so with veteran expertise.   As always, the dual guitar work of Tom Keeley and Steve Pedulla are at the forefront and consistently abrasive and beautiful simultaneously.   The ability of drummer Tucker Rule to keep the tempo of the music that changes vastly from song to song is as impressive a musical feat as there is.

In recent years it seems that Rickley has chosen to croon in favor of screaming while performing live, even when a part of his grind core side project, United Nations.   Do not think that Rickley is taking any sort of vocal vacation because hitting the notes that he hits take just as much effort as screeching the lyrics to “Division St.”   And if you think that Thursday is leaving its past behind, look no further than the lyrics that document the lead singer’s love/hate relationship with his home state:

“Maybe home is just the place you can never escape / From the Camden City graves to the edge of the Palisades / It’s alright, counting city lights / Where the Turnpike divides / Waving goodbye to my former life”.

Thursday have come a long way since 1999; the members and the band have grown and matured, and so has the music.   Open up your ears and your heart to No DevoluciÃ³n and you will be delighted to experience what is to be one of the best albums of the year. (4.0/5.0)