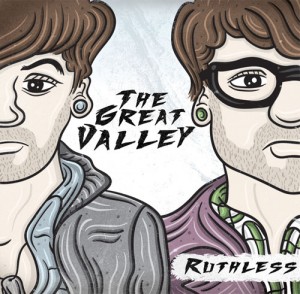 It is rare for a family to produce one golden voice, let alone two.   Yet, we have been fortunate enough for the Matos brothers to realize that they have voices that are perfect to complement one another in a pop rock band.   The Great Valley, out of Delaware, brings us its debut album entitled Ruthless and lead single “Dirty Work”.   After releasing two EPs, one exclusively through AOL music, the brothers have brought us an album released independently but soaking wet with a sound that could easily infiltrate pop radio.   The offspring of a music teacher and a drummer, the pair have been surrounded by music their entire lives.

Ruthless kicks off with lyrics that set the tone for the remainder of the record. “We were young so it was easy / to imagine where all of this was heading / more courageous than two boys could ever be / filled with hope that we can finally tell our story / time flew by like chills up through my spine”.   The leadoff track ‘Yesterday’ that includes the previous lyrics stands as a great introduction for the record, although it would have actually had a more powerful effect if it were around half the length and served as a true introduction.   Yet, when the guitar drops out and we are left with reverb, drumming and layered gang vocals, it serves as one of the high points on the album.

As they say, quality over quantity, and even though this full length clocks in at 8 tracks and under a half hour it hits all the right spots and gives the listener a great feel for what the The Great Valley is all about.   The main attraction is by far the vocals, followed closely by the piercing lyrics that populate the LP.   The guitar and bass prowess of Nick coupled with the drumming and key work by Louis makes it seem that there is a full band working here instead of just the pair.

‘Dirty Work’ has been chosen as the lead single, and after repeated listens, one can clearly hear why.   Lead singer Louis Matos has a fantastic ability to express and invoke a broad range of emotions. There is a little something different about this music though; the brothers are working their collective ass off to get this music out to the masses in an effort to be the DIY spokesmen for the working class individual.   In an interview with Z100, the brother said,  “whether its doing construction or being a police officer, everyone is working hard and that kind of recognition doesn’t get seen on a daily basis.   That’s really what this song is about, the people that are doing the ‘dirty work’ out there aren’t getting the recognition and now its time for us to maybe be their voice”.

The content of the album is apparent from the get-go, with the Matos brothers writing and singing about the musical upbringing as well as filling the underdog role as a DIY band trying to get its music out into the world.

This perfect blend of pop and rock peppers in a little bit of punk when necessary to deliver the tale of two underdogs just trying to make a difference through their music. (4.0/5.0)

Pick up the album on iTunes.