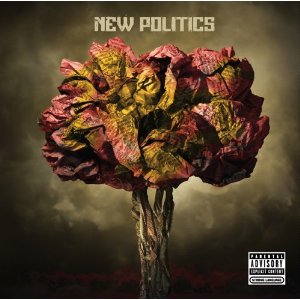 I just really want to like New Politics. “Yeah Yeah Yeah” is a fresh piece of indulgent rock, an appropriate anthem to introduce the band’s self-titled album. Unfortunately, the accolades don’t go too far beyond that opening track. The band’s debut effort disappoints my inner restless teenager that was expecting more zest from a rambunctious young band.

New Politics ultimately sounds formulaic; it eventually lacks the initial pep that draws you into what this Danish band potentially has to offer. The songs are textbook from beginning to end; they are decent for what it’s worth, but there is no noticeable sheen in them. Many of the tracks, such as “Love is a Drug,” have their introductory moments of catchy beats or great bass lines, but that spark gradually fizzles.

The trio obviously understands that an inviting rock song is complete with hooks and beat-driven melodies. They show us that they have that know-how. After all, the guys were absolutely successful with “Yeah Yeah Yeah.” However, the adornments that fill the other tracks just don’t pack the same punch from one to another. The energy is siphoned out so rapidly from the first track to the next.

Where is New Politics in all of this? Where is this band’s unique style or its claim to fame? I do hear the “screw it all” snarl that this band tries to emanate, but I’m not thoroughly impressed. There are more effective ways to convey that smug attitude than what this band has constructed. A little variation and depth of content could have only helped the music. Additionally, the lyrics themselves are lackluster. “Burn,” for instance, is an awfully simplistic song for anyone beyond an angsty preteen crowd. It evidently tries very hard to be in-your-face with its elementary prose, but I think this band is capable of being more clever.

I don’t feel as if I finished listening to this album with a clear vision of who these guys are. It frustrates me that this album is uninspiring as an overall package because the trio clearly has potential to be more than just fillers in this industry. For instance, “We Are The Radio” shows promise; it is a gritty, flashy, and likeable song. The guitars flirt hard, and the chorus makes my head bob a little bit. I can almost overlook the contrived lyrics because for at least one more song, I can connect with that New Politics strut that I loved so much in the opening track.

If I haven’t made it clear enough yet, I confess that I am the biggest advocate of New Politics’ first single. “Yeah Yeah Yeah” is a big, refreshing smash among other radio hits that simply don’t deliver the same grit and swagger. In the meantime, it will be the one song I enjoy blasting out of its confines. I’m just going to have to wait for New Politics’ next effort to become a genuine fan. I did have higher expectations for this seemingly buzz-worthy band.

Fans can purchase the album on iTunes.