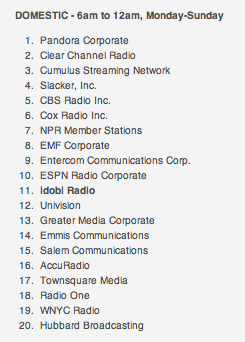 idobi Radio, independently owned and operated since 1999, has been on the cutting edge of modern rock music and programming since its inception. When terrestrial broadcasters became increasingly wrapped up in consolidation efforts, idobi Radio focused on music and programming. idobi Radio’s TSL (Time Spent Listening) highlights the strength of that decision.

The idobi Radio audience is passionate about the music and shows they love to listen to. idobi has become a lifestyle with a dedicated audience, who ranks far above Clear Channel, Entercom, Emmis, and other traditional broadcasters (all desperately trying to enter the digital space). Despite major competition, idobi Radio is #1 for TSL in the entire world. This is credited to idobi Radio’s forward-thinking music selection and original programming.

idobi Radio proves great original programming, allowing creativity to rule, and forecasting hit music develops a brand listeners are passionate about and love to listen to. A model of success that is no longer found on the FM dial. idobi picked up this strategy, ran with it, and shows no signs of stopping. idobi Radio is the future of broadcasting.

Triton Digital (www.tritondigital.com) is the leading digital service provider to traditional and online radio with a rapidly expanding roster of media clients emerging from the television and print space. Our infrastructure, applications, and innovation are powering digital audience and revenue growth for clients around the globe. Our platform makes digital content extensible, personal, social, and profitable. Triton Digital is a portfolio company of funds managed by Oaktree Capital Management, L.P., a leading global investment management firm.