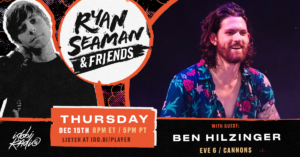 This episode I have drummer Ben Hilzinger from the band Eve 6 and he also plays drums for the band Cannons. I met him before he was in either of these bands, we kept in touch and I met him through Mike Herrera of Mxpx. Ben and I have kept in touch over the years and I learn his story of how he came to LA from Washington to make a career as a drummer.