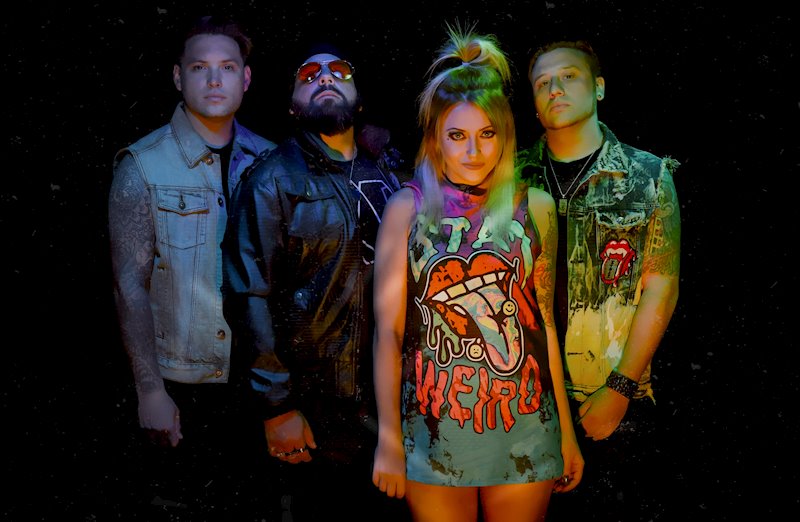 In this episode of The Undiscovered Sound, Jeff speaks with Christina, Lead singer of Kaleido about working with producer Johnny K, Touring with September Mourning and appearing at Shiprocked!

Stalwart Detroit Rockers Kaleido have been pounding away as an independent Rock band for the last 6 years, releasing 2 EPs and an album independently, while touring constantly. They’ve opened for notable bands like Seether, Halestorm, Rob Zombie and Evanescence; and they kicked off 2018 with two performances on the Shiprocked cruise.

Recently they played a handful of dates on the final Vans Warped tour. The trials and tribulations of being Rock N’ Roll survivors in an ever-changing Music business has made them stronger and tougher, and that is reflected in their muscular new single “My Enemy“, which was produced by Johnny K (3 Doors Down, Disturbed, Pop Evil, Megadeth, Adelitas Way.

Kaleido -comprised of Christina Chriss(vocals), Joey Fava(drums), Ronnie Rosolino(Guitar), and Cody Morales(bass) is a fresh, modern day Detroit incarnation of Rock N’ Roll: a straight-up,piss-and-vinegar band. Their authentic and memorable songs are highlighted by a dynamic live show, which has garnered them accolades on the live music circuit. Detroit Media has taken notice: Kaleido was a featured performer on WDIV-TV (NBC) Detroit 2017 Annual Fireworks Telecast, and has also been featured on local PBS show Metro Arts and CBS 62’s local music coverage. They were named Best Band in Detroit by Real Detroit Weekly in 2013 & 2014, and won two Detroit Music Awards in 2015 for “Outstanding Rock/Pop Group” and “Outstanding Rock Recording” for their second independent EP ‘Unbreakable‘. Kaleido was nominated again in 2017 for their album “Experience” and won“Outstanding Heavy Rock Group”.

Their “Experience” album helped grow their fan base both in the US and abroad, debuting @ #11 on Soundscan Top New Artists Albums and #37 on the Top Current Rock Albums chart. The album was tapped as “New and Noteworthy” @ iTunes and Amazon Music and spawned the Active Rock charting “Die Tryin‘– which made it into the Loudwire Video “Battle Royale” Hall of Fame by remaining at #1 for 5 straight weeks.