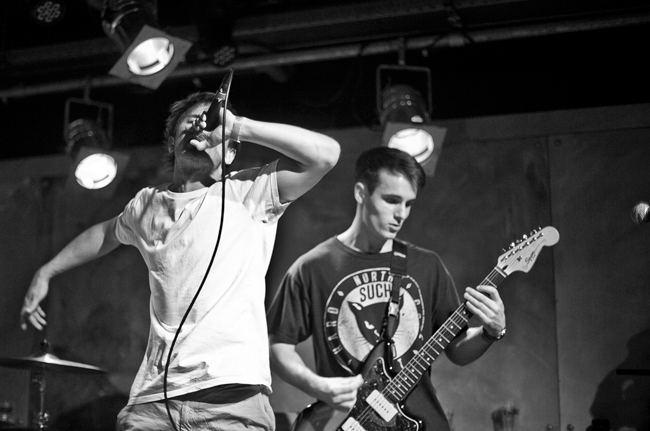 This is a story about how I fell in love with ROAM one gig at a time without even trying.

ROAM is scheduled to play in Eindhoven, Netherlands at the end of the week for a fest that they say will take their “European virginity”. The band has been around since 2012 but I discovered them in 2013 with the Head Down EP. I’m really surprised to learn that the British band has never played in mainland Europe before, and I’m super excited to witness their first performance here.

We make it to the venue for Mildtfest. The weather is amazing, the city is beautiful and we–as well as most of the bands playing that day–spend most of our day wandering the streets and enjoying the spring weather. As we hang around the venue, we hear a few dudes talk with a serious British accent; we can’t believe UK kids would travel to Eindhoven for a show, but you know, this line up does rule. Fast forward an hour later, those kids are playing on the basement stage and we feel like complete idiots for not knowing the guys in ROAM are that young. (Some internet stalking will later tell us that some band members are actually younger than us–I was 21 at the time). The amazement doubles when their set starts and the crowd’s reaction is MASSIVE. I witnessed some crazy sing-alongs and pop punk climbing that afternoon, and I’m still not completely over it. ROAM are the first band to play (before none less than State Champs, Real Friends, and The Wonder Years, among others) and the enthusiasm quickly fills the room (and the whole venue), putting a huge smile on everyone’s faces. I definitely remember that day as the ultimate feel-good music festival. 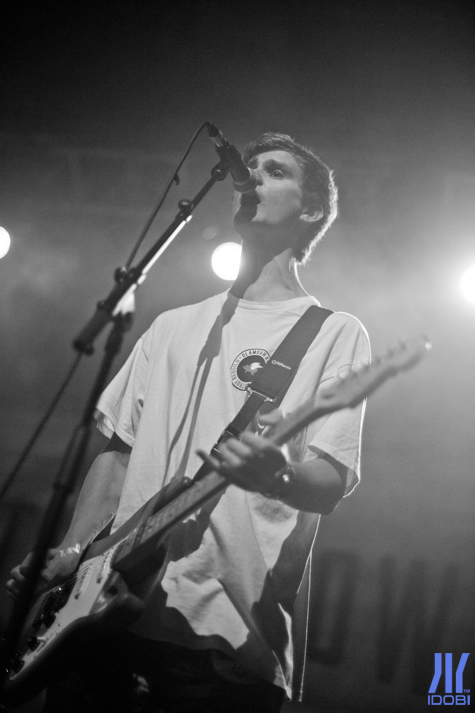 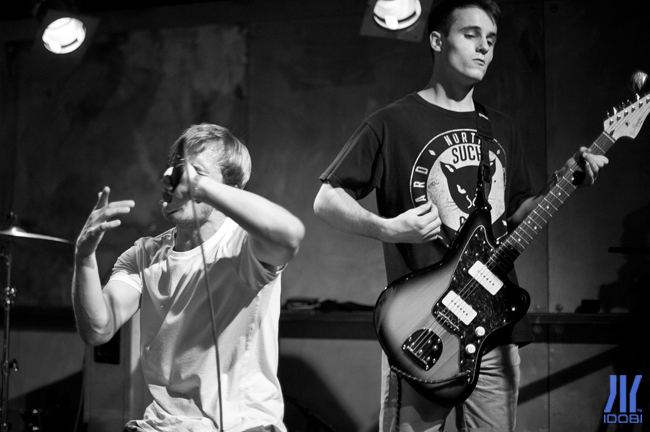 I’m back with the same friends and the same weather. But in Paris. ROAM and Moose Blood are opening for Man Overboard at our very own boat-venue, le Batofar, and we meet up on the banks of the Seine for some beers before the show. It has been almost a year since that afternoon in Eindhoven and I would be lying if I said I’m not utterly pumped up for ROAM. They have released Viewpoint and signed to Hopeless Records since then; talk about a quick rise. The set is highly energetic even though the pit is far from full and some stage dives even happen. People are actually singing along–excuse my pessimism but Paris isn’t a big pop punk town–so I’m floored. The excitement for a band like ROAM gives me a glimpse of hope for our local scene. Eh, they may be a Hopeless band now but they’re still opening the gig and it’s their first time in France. 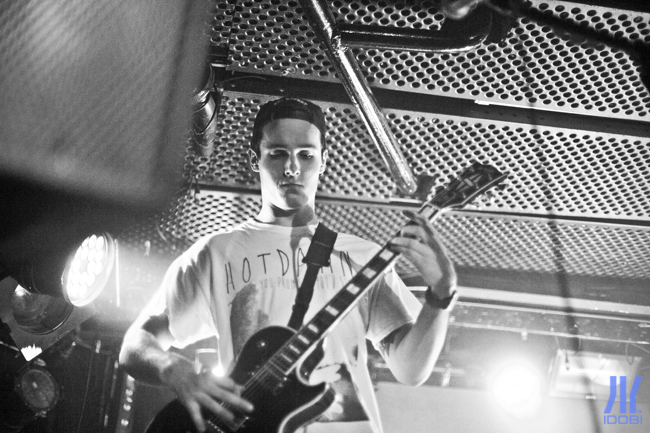 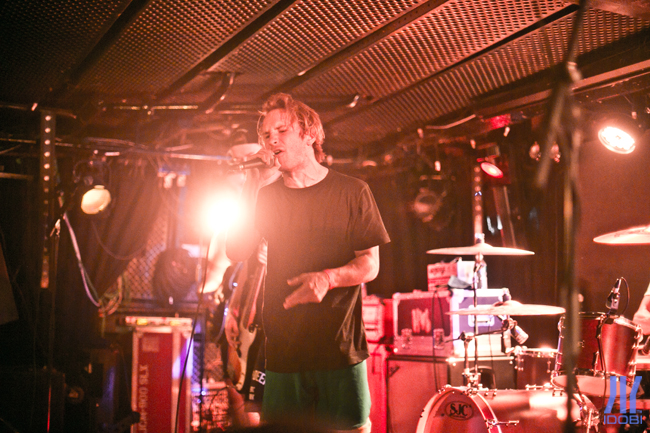 This time I have literally no expectations. The band is opening for All Time Low in Montpellier (a French town that barely gets any big shows from our scene) and you can tell that for most of the crowd, it’s their first gig ever. This also means the energy of the show is pretty weird, with the crowd barely moving. But the reaction to ROAM seems overall positive, considering their style doesn’t necessarily match the headliner’s. Time would eventually tell us that this tour with ATL actually built a fanbase for the British bunch in France. 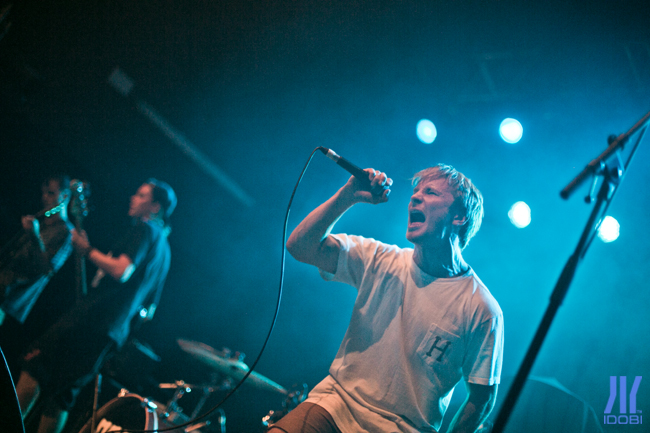 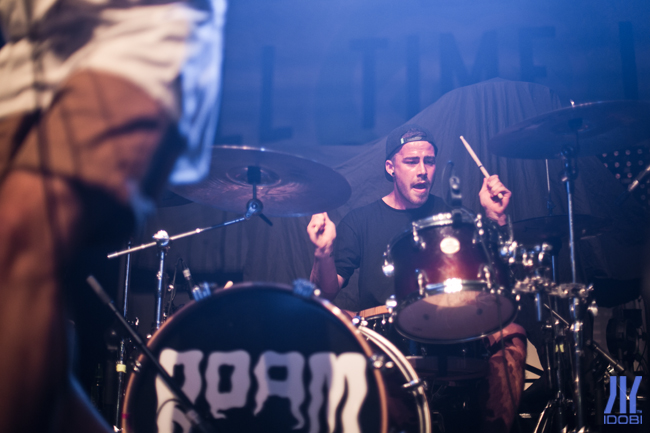 Somehow, on this night, State Champs both played their first French show and HEADLINED Paris at a sold out venue. And they’re bringing ROAM and Knuckle Puck with them. I’m still really amazed by this show looking back because nothing prepared me for such crowd action. I remember this night as the one we discovered a whole new generation of pop punk fans that we had never seen before. The electricity in the room started during ROAM’s set and it put a smile on my face instantly. It should be noted that at this point, the band had not yet released any song from their debut album and already built such a strong following. 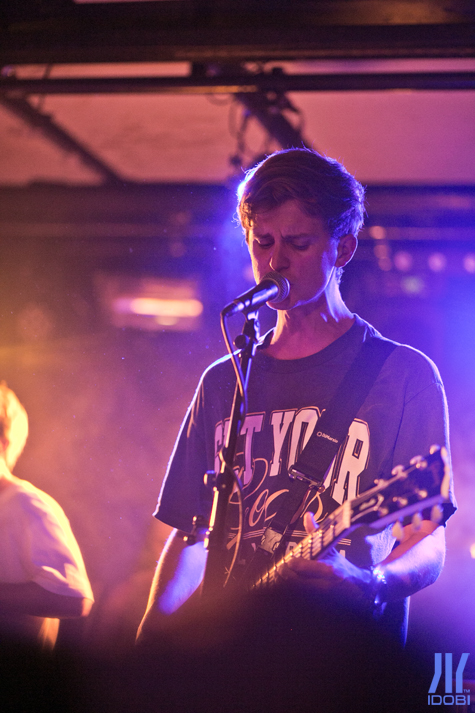 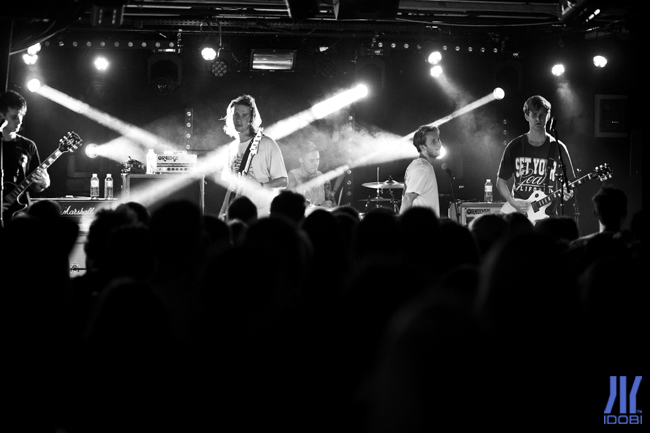 Don’t even get me started on the festival shows that also happened that same year (Slam Dunk and Warped Tour UK). Those guys clearly built a fanbase in their country and Europe in general by touring non stop, and both their stage presence and the crowd’s response keeps getting better.

It was finally time for a headline show. Taking place at Les Combustibles in Paris, a tiny venue where The Story So Far once had their first French gig, this show is meant to be an intimate one. About two weeks after their debut album Backbone’s release, that night is closing their European headliner, because the band has to head back to the UK to open for… none other than Sum 41 on the Kerrang! Tour. This “new generation of pop punk kids” are there, and damn they know every word, even to the newly released songs. Less than a year after their first French show, ROAM are headlining Paris on a Monday night and I am oddly proud. 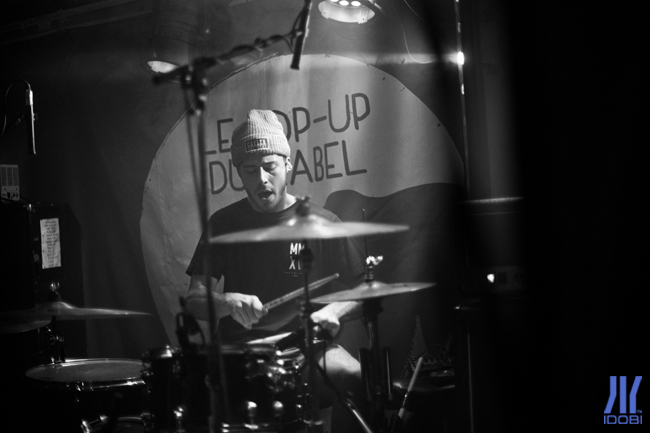 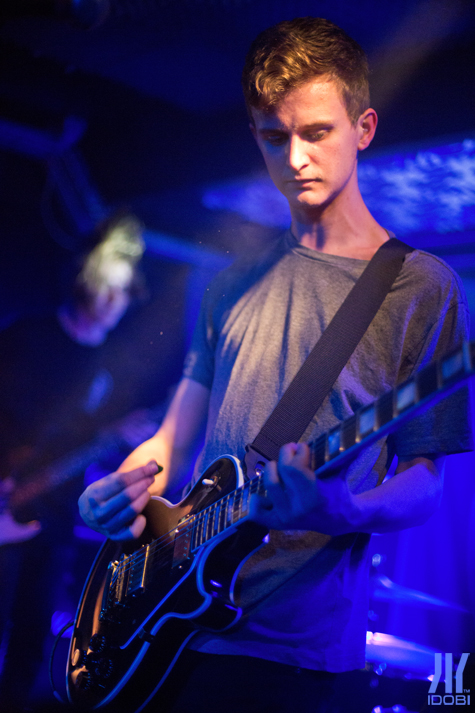 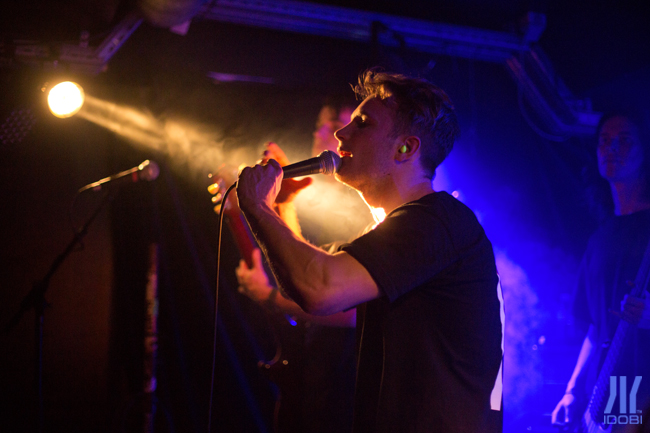 It all comes down to this night. This is the story of how I almost missed out on seeing ROAM live for the 11th time but couldn’t bear it. On this European tour, ROAM are supporting Against The Current and they are joining the party at Le Trabendo in Paris. Their supporting slot has been announced the day after their headlining show at Les Combustibles, and at this point I’m pretty much convinced I don’t need to see a band twice the same month, especially after a banging headline set… What was supposed to be a calm movie night turned into a sprint when at 4PM, when I realized I actually really wanted to cover this show and hurried to request a photopass. That’s how I ended up running to my place to grab my camera, then racing to the venue to swing into the photo pit 3 minutes before ROAM’s set. And I do not regret getting to see them win over Against The Current’s crowd, playing bangers such as “Warning Sign”, “Over Your Head”, and “Deadweight” to people who had never heard of them. 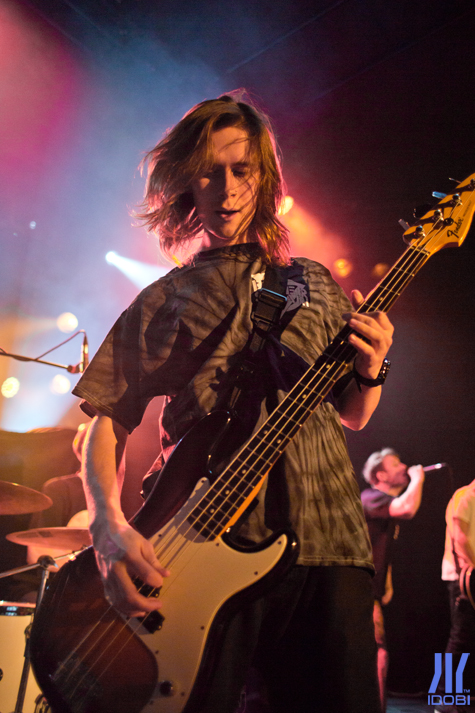 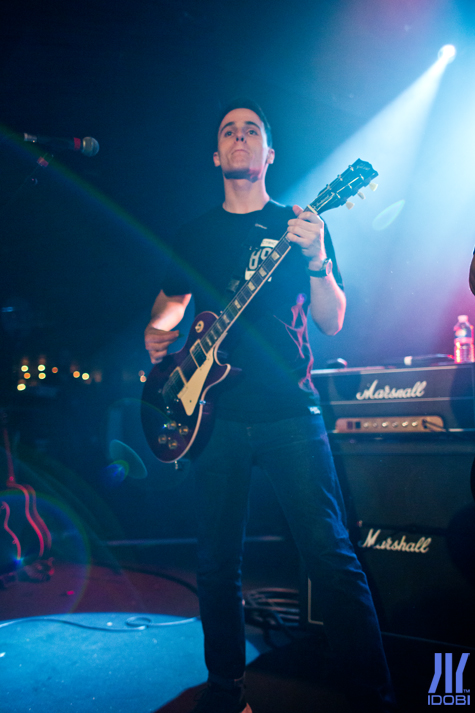 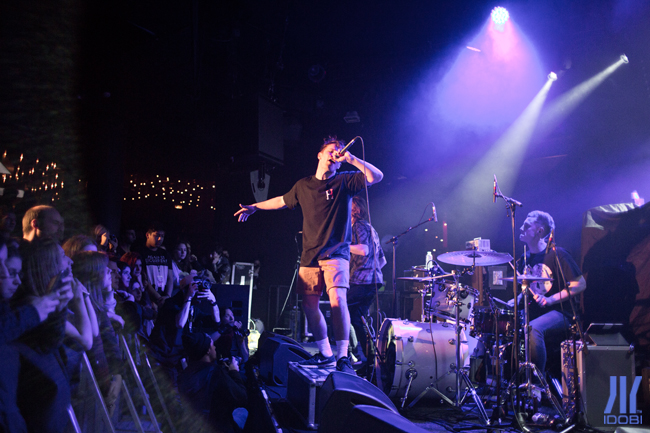 So what’s next for ROAM? A Japanese tour with The Wonder Years, a European tour with Simple Plan, Slam Dunk Festival once again and… Vans Warped Tour all summer. After a few tours in the USA, it’s pretty obvious that this one will help ROAM break into the American market for good (in the pure pop punk tradition). 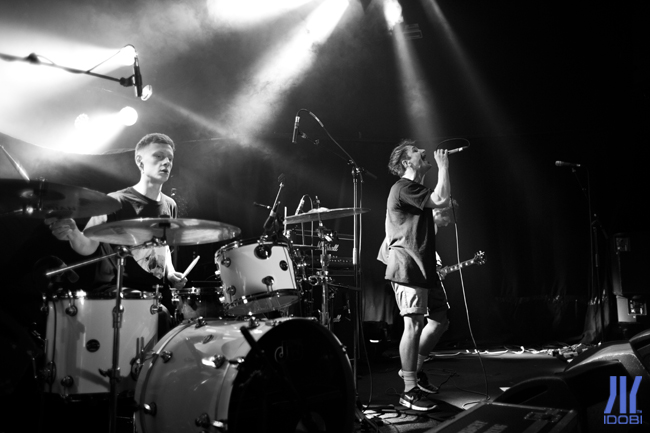 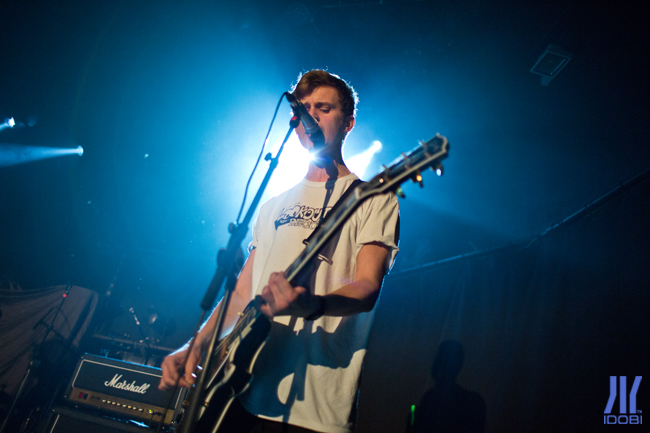 There’s something hypnotizing in seeing a band rise to a top and conquer new territories. Playing all kinds of venues, in all kinds of settings, to all kinds of crowds (from Against The Current fans to Shikari aficionados as well as All Time Low kids). This was the story about how I fell in love with ROAM one gig at a time without even trying.