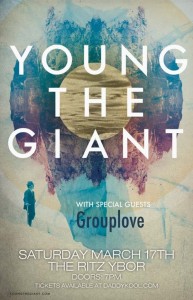 Young The Giant and Grouplove have come together for one of the most talked about tours of the year, bringing their brand of indie rock to audiences across the country. Selling out venue after venue and delivering memorable, energy-infused sets, the two bands have proved themselves worthy of their recent success.

Fans in Florida got their chance to catch the tour on St. Patrick’s Day at The Ritz in Ybor City. The newfound mainstream success of both bands was obvious from the line outside, which stretched four blocks and was filled with a wide variety of people, from parents with their young children to hip teenage couples and even groups of friends rocking gray hair. This type of crowd is a huge change from those that have formed in the past for these bands — Young The Giant was first spotted on the scene opening for bands like Anarbor, while Grouplove have been the somewhat anonymous opening act on college tours and festivals over the past few years. However, with their respective singles “My Body” and “Colours” getting some recent FM airplay, it’s clear that these bands aren’t just for the underground anymore.

After all 1,114 fans piled into the sold-out Ritz, it was time for Grouplove to take the stage. The opening chords of “Lovely Cup” sent the crowd wild instantly. Most in attendance were already boozed up from a day of parades and bar-hopping in honor of the holiday, and their eagerness to have a good time combined with the band’s energy made for an automatic dance party. What was even more exciting than the feel-good vibe that the fans were radiating was the music coming from the stage. Grouplove perfectly recreate the sounds of their recordings live, proving their music has nothing to do with production and everything to do with pure talent. Frontman Christian Zucconi’s flawless and powerful vocals demanded the full attention of the crowd throughout the entirety of their set. Most of the other band members stepped in for vocals at some point as well, creating an interesting dynamic, but it was Zucconi who truly provided a live experience to be reckoned with. The band played all the fan favorites, from “Spun” to “Itchin’ on a Photograph.” With a catalogue of songs all different from one another, Grouplove’s live show is more entertaining than many other bands on the scene right now. Before closing with “Colours,” the group paid tribute to the late Whitney Houston with an awesome rendition of her classic “I Wanna Dance With Somebody.“

The crowd was just as energetic and ready for the start of Young The Giant’s set as they were for Grouplove’s. Between fan enthusiasm being equal for both groups and the two bands repeatedly saying how excited they were to be sharing a stage with one another, the sense of community forming between their fan bases was taking over the room. Though they also played amazingly, Young The Giant’s music does not lend itself as easily to live performances as Grouplove’s. Hearing a series of slow jams in a venue packed with people bursting with energy felt a bit strange, but the band pulled it off nonetheless. After opening with “Apartment,” they played just about every song off of their self-titled debut album. Fans danced and crowdsurfed through the set even during slower songs like “Cough Syrup.” The band livened up the experience even more with two new songs, “Guns Out” and “What You Get,” which boasted a sound true to their previous jams but with an upbeat twist. Fans were extraordinarily receptive to the new songs, as well as to the band’s cover of R. Kelly’s “Ignition.” The night culminated with the moment that everyone had been anticipating — hit single “My Body,” which had the crowd’s feet off the ground until the final chords.

Fans left The Ritz buzzing about their concert experience. While Grouplove truly blew the crowd away, Young The Giant also delivered a performance well worth seeing. Each of the bands’ performances left no room to wonder why they’ve both reached such momentous levels of recent success.