“When Yellowcard decided to take a break in 2008, I had never felt so uncertain about my future,” recalls vocalist/guitarist Ryan Key, about the story behind the title of their new album, Southern Air. “I decided the best thing for me to do was leave Los Angeles and relocate to the East Coast to be closer to my family. I landed in a small college town in Northeast Georgia called Athens. It was such a crucial and developmental chapter in my life for which I will be forever grateful.” Soon after the band commences their mainstage duties on the 2012 Vans Warped Tour, Southern Air will be released via Hopeless Records on August 14, 2012.

“I learned so much about the future I thought I was so uncertain about,” he explains in reference to the previous album, When You’re Through Thinking, Say Yes (WYTTSY). “I saw more clearly the things that really mattered, and really moved me. With a renewed energy and passion for music we reentered the studio to begin working on my fifth full length record with Yellowcard. The band was firing on all cylinders and the music was reflecting that energy in every way. WYTTSY was, in a way, our return to ourselves.

“After touring 30 plus countries in nine months in support of WYTTSY, we decided to take the momentum we had and start writing songs again at the start of 2012,” he continues. “Personally I think getting back on the road and in a way realizing my dreams a second time, coupled with looking back two years later on my time back East, was all the fuel I needed to write what has become known as, Southern Air.“ 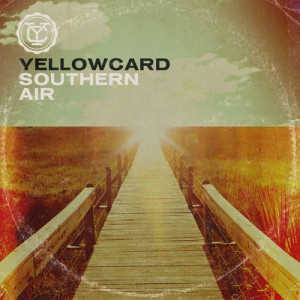