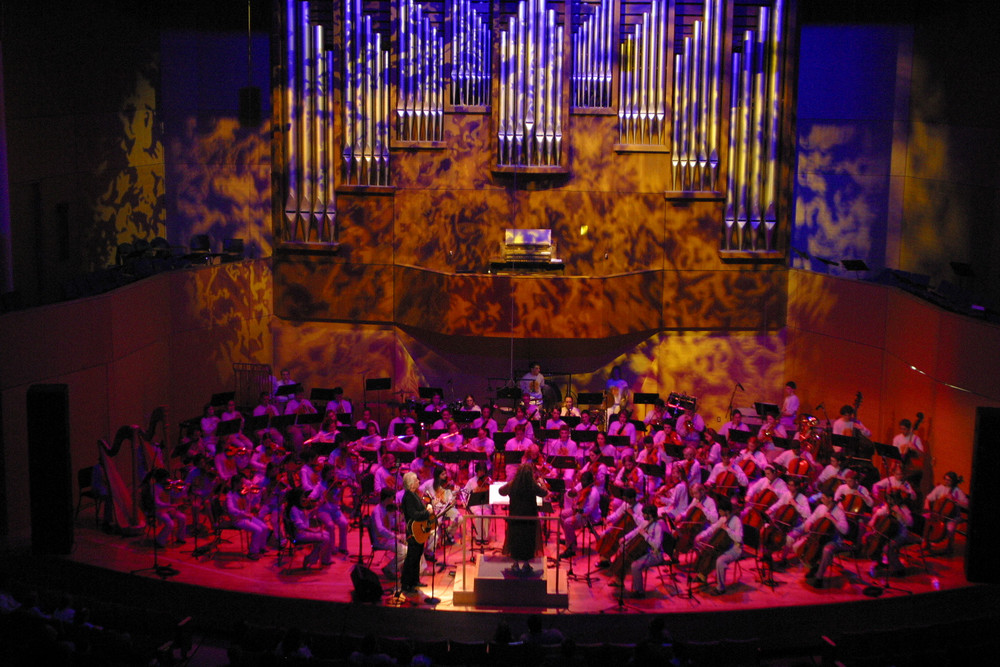 It’s fair to say the closest most kids in high school  get to being a professional musician is enrolling in their local band class, but the vigor of adding a music-centered elective just wasn’t enough for the one hundred and fifteen high schoolers in the Contemporary Youth Orchestra  (CYO). Instead they’ve harnessed their potential to its full extent and joined the ranks of one of the world’s premiere youth orchestras. While the other kids in the lunchroom chat about their newly adopted nine to fives, or the party at Jane’s house last weekend, these kids discuss their performances with Pat Benatar, Styx, and Ben Folds.

Soon the kids of the CYO  will share the details of the latest, greatest addition to the orchestra’s schedule: the Gibson Brands Alternative Press Music Awards – Fueled by Monster Energy Drink, held at the Rock and Roll Hall of Fame. There’s no better orchestra for the APMAs–a fact proven simply by their Facebook description: “Everything you would never expect to hear done with an orchestra…we do that here.” They mean every word of the statement, creating music and concert experiences you would typically never associate with something as classical as an orchestra. Another factor that makes the orchestra that perfect piece of the puzzle for the awards is that it’s made up of teenagers.  And what age group loves alternative music more than teenagers? The passion they have for the music is sure to shine through. This is fun; this is young; this is exciting.

Even with all these cold hard facts supporting the decision for Alternative Press to choose CYO, it might still seem a little unreal that a group of high school students will be the official orchestra to a history making award show. But when you take a look at the team at the forefront of all this fresh young musicianship it makes it all entirely possible. The fearless leaders are determined to give the youth orchestra the opportunity to create dreams through the medium of melodies. Liza Grossman, executive director, conductor and ringleader of the entire organization, stands in the center of the team–and stage–at every CYO show. Her relentless involvement serves to make the orchestra even more unique and proves this is something run by people who care.

Perhaps the best thing the orchestra does is provide kids with a kickstart. While high schoolers aren’t likely to be taken serious in any professional atmosphere, Grossman and co. have created an environment where “kids” are  treated equally, and can learn the skills they’ll need to participate in that “professional” environment as adults. Plus, the orchestra gives their resume a boost like none other. Could you imagine playing alongside music legends, being an official member of an award show orchestra, or playing the role of a presenter at said award show? It’s earning opportunities like this that set the orchestra apart in all it does. This is real world experience, as opposed to being lectured on the ins and outs of music and the industry by a teacher behind a podium. The influence CYO has on its students is abundantly clear on the alumni page of the orchestra’s official website. Comments like, “It made me more open-minded and willing to explore areas that are less comfortable and familiar to me,” “Continuing to educate high schoolers further into the meaning of music–why it works, why it exists, and why it is what makes us human,” and “CYO ignited completely my passion for contemporary and new music. CYO & Liza ignited the fire to be who I am no matter what,” portray exactly what the orchestra means and has done for its members.

From their first days in August of 1995, there’s been something to learn from CYO’s members and team alike: hard work and the right motives can certainly allow you to conquer the world. It takes something special to be a nationally recognized musician while still taking notes for your tenth grade math class, but the success of the members of CYO doesn’t end there. They also get to participate in a game-changing organization, one that’s unique in every sense of the word. The approach is fresh and exciting, and keeps you on the edge of your seat while watching the orchestra do their thing. The skills and experience cultivated in CYO  gives their musicians  careers,  an incredible headstart, and one hell of a story to tell their grandkids.

Make sure you’re paying close attention to the hard rocking orchestra at the AP Music Awards this year; these kids work hard, and deserve every bit of the applause they will undoubtedly receive.