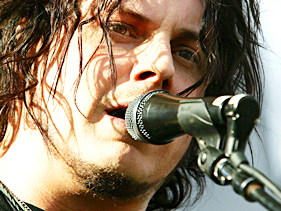 That extreme “Grab Some Air” Air Force ad during the Super Bowl with the wicked snowboarding, skiing, surfing and skateboard moves did feature a surfy guitar riff that sounded an awful lot like the White Stripes’ “Fell in Love With a Girl.”

That’s certainly what Jack White thinks, and judging by a message on the band’s Web site, he’s not too pleased about it. Under a side-by-side post of the original “Girl” video and a link to the Air Force Reserve ad, the site read, “We believe our song was re-recorded and used without permission of the White Stripes, our publishers, label or management. The White Stripes take strong insult and objection to the Air Force Reserve’s presenting this advertisement with the implication that we licensed one of our songs to encourage recruitment during a war that we do not support.”

While the band pledged their strong support for the U.S. military “at home and during times when our country needs and depends on them,” the message added, “We simply don’t want to be a cog in the wheel of the current conflict, and hope for a safe and speedy return home for our troops.”

The letter ended with a promise to seek legal advice on the matter. “We have not licensed our song to the Air Force Reserve and we plan to take strong action to stop the ad containing this music,” White said.

A spokesperson for the Air Force could not be reached for comment at press time.

The White Stripes have been on hiatus since 2007, when drummer Meg White’s acute anxiety forced the duo to cancel their tour. They have reportedly been working on a new album, though Jack White has promised that a second disc by his most recent side project, the Dead Weather, would be released first.