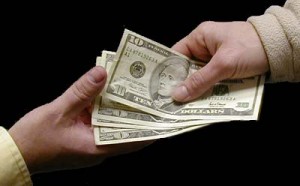 Tell the artists something they don’t know. The music industry has long been in decline, and even as a proliferation of new subscription music services have hit the market–Spotify, Rhapsody, Rdio, to name a few–it doesn’t appear musicians have started to feel the benefits. The innovations in both technology and business models for these services may be one of the few signs of hope for the industry–but for now, the labels and artists have a long way to go before their investment in this future of on-demand, streaming music pays off. Lady Gaga, for example, was rumored to have earned only  $167 from more  than 1 million plays of “Poker Face” on Spotify; Kirk offered some more depressing statistics at last week’s event which indicate the industry’s woes are far from over.

The thinking here is that the payments to artists could get even worse. In a sense, the race to gain subscribers can be a race to the bottom. As more and more services enter the space, whether for on-demand or streaming services, the more concessions they’re willing to make to attract more listeners. Services want to offer the lowest monthly subscription plans, the least amount of ads, the cheapest prices per stream. All that might benefit the users, but it’s a long way off from benefiting the artists.

A spokesperson for Spotify wrote in an email to  FastCompany:

“Spotify does not sell streams…Users pay for access either via a subscription fee or with their ear time via the ad-supported service. In other words, Spotify is not a unit based business. Overall…Spotify is generating serious revenues for rights holders, labels, publishers and the artists that they represent. We have paid over $100 million to rights holders since our launch. Spotify is now the second single largest source of digital music revenue for labels in Europe according to  IFPI.”

Larner acknowledges that the industry is still trying to recover, but argues that it will take time–and patience from the labels and artists–before the industry has a turnaround. “I think we all believe that through use of free and other methods to get people in the door, subscription for on-demand music will reach that tipping point that other subscription media products have reached,” he says. “Look at Netflx. Subscription on-demand music has been around for a long time but it hasn’t reached that tipping point yet. When it does, everyone will benefit. We will benefit, the labels will benefit, the artists will benefit.”

While he’s not sure industry revenue will ever return to ’70s- and ’80s-era heights–because of the change of distribution from physical to digital, and the resulting decline in margins–he’s certain subscription music will help at least revive some of the lost revenues. But when?

“I think we’re a hell of a lot closer than we were five years ago, even three years ago,” he says. “I use Netflix as an example because people are now used to not having to own their content. I acknowledge movies and TV are different than music in terms of the emotional attachment of ownership. But I think people will get more socialized to the point where they say, ‘Hey, I don’t need to physically control these digital files,’ And that if they pay a reasonable fee every month, they can access their music whenever and wherever.”

“Once they get over that hump–and they’re certainly getting there with video and I think they’ll get there with music–it’ll be a big business,” he adds.