In case you spent last night under a rock, here’s what the internet has been losing its shit over: Blink-182 released a brand new song, announced a new album called California out July 1st, and a bunch of dates with support from All Time Low, A Day To Remember, All American Rejects, and DJ Spider for the most pop punk tour since 2003 that has us thinking,  boy, Christmas has come really early this year.  “Bored To Death” is the first single the band have released following Tom Delonge’s departure, and Matt Skiba of Alkaline Trio has joined the band. Contrary to its title, nothing about this song or its impromptu announcement has been boring, and we challenge you to find a pop punk fan who doesn’t have an opinion on this new era of Blink–including idobi’s staff. Read on to see what we had to say on “Bored To Death”, check out  the full list of tour dates, and let us know what you think in the comments!

Was a little concerned that Blink wasn’t going to sound the same or Skiba would be trying too hard to be Tom but once I heard this song I was so stoked! The band did a good job of keeping a Blink sound and doesn’t sound like they’re trying too hard at all. In my opinion it might actually be one of the more natural songs they’ve released.
– Fish

My first impression was immediately +44, and then the chorus hit. It doesn’t sound like old Blink, but nothing will. I admit that I didn’t think Blink could go on without Tom, but oh my god this song took all my worries away. You can definitely hear the influence of John Feldmann at certain parts of the song but it still has that Blink feel that so many bands have tried to capture and so few have.
– Tess Reynolds

I love it. I was a fan of Blink, but Tom is what kept me from being a huge fan. Alkaline Trio has been my favorite band for years, so I was actually relieved when Skiba took on the role. I thought that the vocals complimented each other on this song more than most of Blink’s earlier stuff. I was already excited for a new album, but now I can’t wait.
– Alex Mayes

I love this! It’s SO good to hear Blink 182 again. I was kinda disappointed with Neighborhoods as a “comeback” album when Blink originally reunited and it’s been a shaky relationship with their new music for me, but I truly enjoy the new song. It feels right. I love what Matt Skiba brings to the song; it’s just the right amount of change for me. I also get a lot of nostalgia from it–the first 3 seconds sound so much like the intro to “Feeling This.” And I definitely hear a taste of +44 on the verses. But overall this feels like old Blink that’s new at the same time. It makes me really, really excited.
– Hannah Pierangelo

Sounds like someone doing a Blink cover…and not quite getting it right.
– Cindy Tenicela

It’s definitely got a nostalgic touch to it that reminds me of their older albums, but at the same time this really  feels like a new era of Blink-182. Especially with the line, “It’s a long way back from 17”, which for me shows their recognition of how much they’ve grown since the early Blink days, but also will resonate with their audience who’ve all grown up with them. And if this song is any indication of what’s to come, we’re in for a treat–really excited to see what Skiba will bring to the table on the album!
– Alex Bear 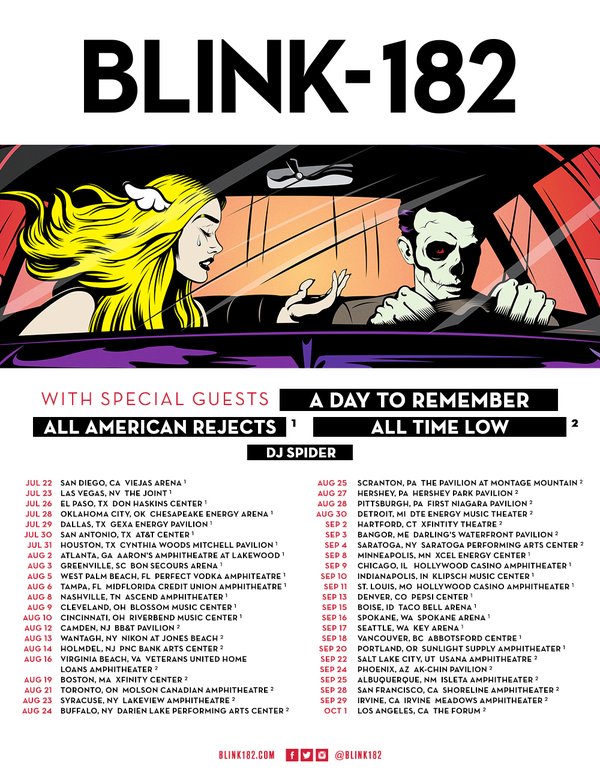 Tags: Blink-182, Bored To Death, California, What We Think