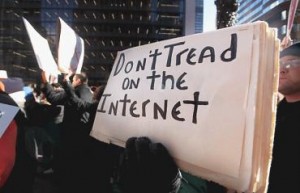 Members of the Senate are rushing for the exits in the wake of the Internet’s unprecedented protest of the Protect IP Act (PIPA). At least 13 members of the upper chamber announced their opposition on Wednesday. In a particularly severe blow for Hollywood, at least five of the newly-opposed Senators were previously co-sponsors of the Protect IP Act. (Update:  since this story ran, the tally is up to 18 Senators, of which seven are former co-sponsors. See below.)

Marco Rubio, a freshman Republican Senator from Florida who some consider to be a rising star, withdrew his co-sponsorship of the bill, citing “legitimate concerns about the impact the bill could have on access to the Internet and about a potentially unreasonable expansion of the federal government’s power to impact the Internet.” He urged the Senate to “avoid rushing through a bill that could have many unintended consequences.”

Sen. Orrin Hatch (R-UT), one of the chamber’s longest-serving members and another co-sponsor, described the Protect IP Act as “simply not ready for prime time.”

The partisan slant of the defections is surprising because copyright has not traditionally been considered a partisan issue. Before Wednesday’s protests, PIPA had 16 Republican co-sponsors and 23 Democratic ones. The bill lost a quarter of its Republican co-sponsors on Wednesday, while we know of only one Democrat, Ben Cardin (D-MD), who dropped his support.

Those who dropped their support were most likely bolstered by strong opposition from conservative think tanks and blogs. On Tuesday, the influential Heritage Foundation  announced  that it would include SOPA and PIPA as a key issue on its voter scorecard. And the popular conservative blog redstate.com, whose founder  threatened  to mount primary challengers to SOPA supporters last month, has been  hailing  Senators  who come out in opposition.

Neither side is close to having a majority. A  whip count by OpenCongress  found 35 supporters (including 34 co-sponsors), 18 opponents, and 12 more Senators leaning toward opposition. About 35 Senators have not committed to a position, perhaps reluctant to do so for fear of angering either deep-pocketed Hollywood campaign contributors or their constituents back home.

Here is the full list of new opponents. An * indicates a former co-sponsor.

Update (7 PM):  David Vitter (R-LA) is now  also opposed.  He was previously a co-sponsor of the legislation.