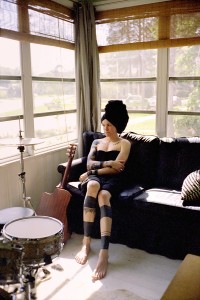 Tom Gabel of Against Me! will begin living as a woman after years of privately dealing with gender dysphoria. Gabel will take the name Laura Jane Grace and begin hormone therapy and electrolysis treatments as part of the transition process. She will remain married to her wife Heather, with whom she has a two-year-old daughter named Evelyn. In the latest issue of Rolling Stone, she spoke of the importance of her wife’s support and her hopes that the public will be equally supportive:

“For me, the most terrifying thing about this was how [Heather] would accept the news. But she’s been super-amazing and understanding.

I’m going to have embarrassing moments, and that won’t be fun. But that’s part of what talking to you is about — is hoping people will understand, and hoping they’ll be fairly kind.”

While the news may come as a surprise to many, Gabel has previously alluded to her gender dysphoria in Against Me!’s music – the song “The Ocean,” from 2007’s New Wave, features the lyrics “If I could have chosen, I would have been born a woman / My mother once told me she would have named me Laura / I’d grow up to be strong and beautiful like her.” The full story will be available in the latest issue of Rolling Stone, due out this Friday.