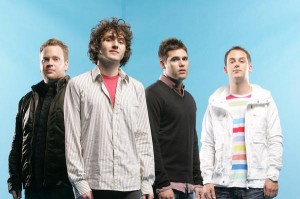 The Starting Line have confirmed that their hiatus is officially over. Though they have been active again for some time, recently announcing tour dates with All Time Low and even debuting new music, there has always been some confusion as to the status of the band; guitarist Matt Watts cleared everything up in a statement to AbsolutePunk.

“I just happened to read all the tweets and postings about everyone’s excitement about the TSL ‘break’ being over. First off, I’d like to thank everyone for the excitement and enthusiasm, it really means a lot! It wasn’t intended to sound like an official announcement that the break is over, we all felt like it was over once we started playing shows again, but I guess hadn’t publicly acknowledged so.

So to address it:

As you’ve probably noticed, TSL has become slightly more active, and we even have a few new songs in the works. The main reason behind the break was to take some time and evaluate things, touring for 8+ years got really exhausting and we all needed to take a step away to see if TSL was something that we all still loved and wanted to pursue. After taking a much needed break, we’re all at a point where we truly love and appreciate what we were able to do together, and genuinely miss playing shows, writing, and being around one another.

Playing shows with the band, and even just getting together to hang out has been more fun than ever, everything is feeling great and natural, and seems as exciting as when we first started out. There’s just an undeniable chemistry and energy present that seemed to be lacking near the end of things.

That being said, we’re playing more shows and writing new music, but there’s no specific timeline that we’re on, nor do we have any real plans (as of right now), to be touring full time. That doesn’t mean that we won’t be playing shows in your city/town, it just means that we probably won’t be taking a traditional approach to touring and being an active band. All of us have various things and commitments happening in our lives that aren’t really conducive to year round touring. However, we do plan on playing shows more frequently and (slowly) working on a new album at some point. We’re also trying to figure out a way to get to some of the cities that we haven’t played since we went on ‘break’ (talking to all of you on the West Coast).

We’ll keep you guys updated on any new developments!”