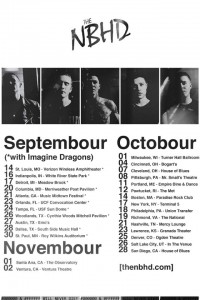 After selling out almost every date of their summer “The Love Collection” tour, The Neighbourhood have announced their fall touring schedule. They’ll be opening for Imagine Dragons in September, and most of those dates have already sold out, but they’re embarking on a headlining run after that. Lovelife and Ghost Loft will be joining them on their headlining tour, and you can find pre-sale information/grab tickets here.