The Devil Wears Prada  hit the road in 2015 for the five-year anniversary of their  Zombie EP, which they will be playing in its entirety each night along with more fan favorites. Born of Osiris, The Word Alive, and Secrets will join the band as support on the 25-date run across North America. Tickets go on sale December 12th, 10am local time on the band’s website. The Devil Wears Prada have also posted a new music video for “War,” which comes off of their latest album release, 8:18.  Check out the dates and music video below! 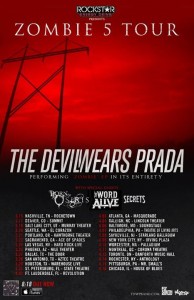