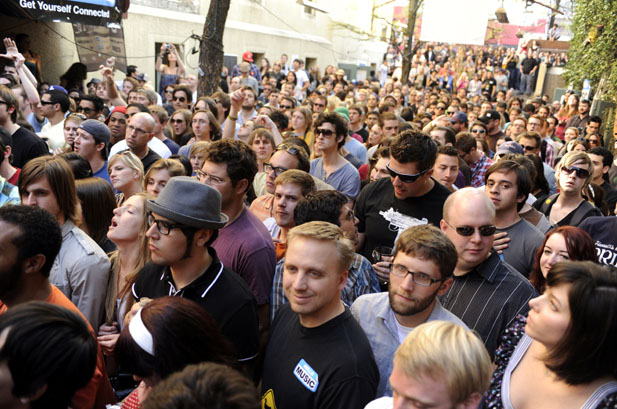 For fans that crowded into Austin’s streets, clubs and even churches last week, the South by Southwest Festival was about drinking a lot of beer, eating barbecue and hearing some of the world’s hottest bands.

But for music executives that flocked to the event on Sunday, the 10-day music, film, and interactive industry networking marathon was an chance to live on the razor’s edge of technology and glimpse of the industry’s changing face.

By nearly all measures, the festival, now in its 24th year, was bigger than ever with a record 13,022 music industry professionals registered. Acts like Courtney Love’s band Hole and the Stone Temple Pilots used the festival as a springboard to end a multi-year hiatus from performing live.

According to  Brent Grulke, the festival’s creative director, some attendance figures dipped in 2009 though  the ongoing recession has not dimmed interest in live music.

“Although the music industry has changed, music itself and those who pursue it remains as healthy as ever,” Grulke said.

Nearly 2,000 artists from over 40 countries played in the music portion of South by Southwest, also dubbed as SXSW, that ran through Sunday, up about 100 from last year. The festival has grown from humble roots in 1987 to become a must-attend event for global music business rainmakers and taste-makers.

At the related film festival, attendees got a sneak preview of the movie “Predators” and other films like “Kick-Ass.”

About 100,000 people were expected to visit Austin last week for the festival that attracts about $100 million to the economy of Austin — capital of the Lone Star state. Official figures are still being totaled.

The festival is as much about savvy marketing and technology as it is about music, after the popular social media outlet Twitter launched its service there in 2008.

“This year’s hot technology is locater services like Gowalla and Foursquare that use global positioning software in ‘smart phones’ and other portable devices to point users toward businesses, friends and social events”, Grulke said.

For Internet company AOL Inc, the festival was a chance to tout its brand after Time Warner Inc spun it off last year. AOL recently launched a music blog called Spinner, which attempted to profile each of the nearly 2,000 bands at the festival. AOL sponsored “pop-up” shows in Austin by bands like Broken Bells, which performed in a parking garage.

The festival is important because “you’re not just getting music industry folks,” said company spokesman Kurt Patat. “You’re getting a wide array of taste-makers.”

The Library of Congress in Washington sent a group of librarians to tout a digital preservation project. The library holds the nation’s largest public collection of sound recordings — nearly 3 million in all. But though old-fashioned formats like records can preserve recordings nearly indefinitely, about 44 percent of sites available on the Internet in 1998 had vanished a year later.

“We’re here to make sure that the music that is happening now is preserved for the future,” said Matthew Barton, curator of the library’s recorded sound section.