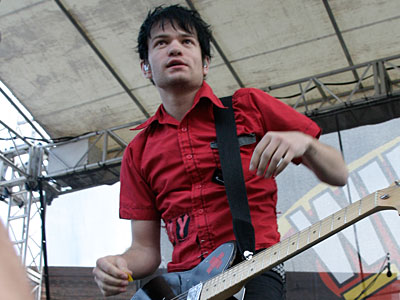 The band posted this last night on Twitter: “Deryck Whibley was attacked in a bar last night by three unknown people. He is in the hospital now. Japanese police are looking into the matter.”

Today, fans of the band were given a brief update via sum41.com: “It is unfortunate to say, but Deryck Whibley is still in the hospital. He was attacked late last night in Japan. We are waiting for results and we are hoping for the best. Thanks for your support.”

The Ajax, Ontario native and his band are currently in Japan on tour, and had stops planned over the weekend at the Summersonic festival in Osaka.

Last week, the band pulled out of a series of American dates on the Van Warped Tour, telling fans that Whibley had a case of bronchitis and was on doctor’s orders to rest his voice.