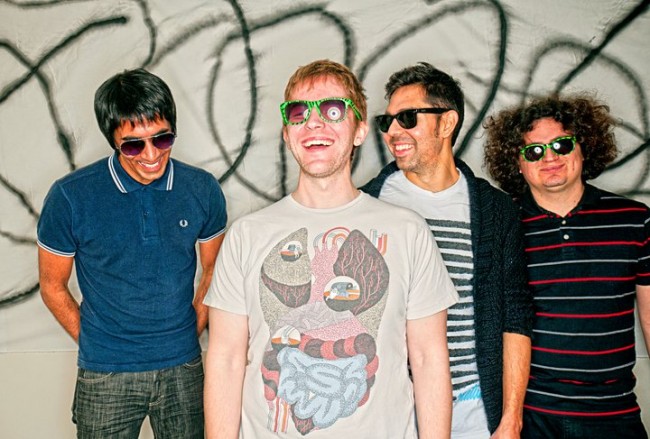 Saves the Day have released a new song from their next record, titled “Remember”, which can be streamed below. They have also welcomed a new member, Dennis Wilson (Every Avenue, This Is Hell) on drums. In support of the record, the band have announced their first headline tour in years featuring openers Into It. Over It. and Hostage Calm. Pre-sale tickets for the fall tour can be purchased here and dates and a statement from the band can be seen below.

We’re just gonna tell you everything at once because we’re friends and we just have to let it out. WE’RE DOING A HEADLINE TOUR AND DENNIS WILSON IS OUR NEW DRUMMER AND ALSO BOOM HERE’S A SONG OFF THE NEW RECORD. Yup.

This is our first headline tour in who knows how many years. We’ve been waiting for this. You’ve been waiting for this. Well… wait no more (just till September – but presale is available NOW)! We’re playing oldies, deep cuts, and lots of new jams from OUR NEW RECORD. You all have breathed a lot of life into this record, and we can’t wait to be in these rooms with you, singing the old and new songs together. We’re gonna lose our goddamn shit. You’ve seen some recent setlists making the rounds on the interweb – we’re gonna go even deeper. We’ll be joined by Into It. Over It. (Full Band) and Hostage Calm on all dates. We picked these bands because we like them and we like what they’re about. Know about them. Go on and say hi, they’re top blokes.

Speaking of Top Blokes, say hello to Dennis Wilson. You may have seen him play all of our 2013 shows with us so far. He’s already been initiated into our little pirate gang, he hits the sound-cylinders with power, and he digs Quicksand, Led Zeppelin, Elliott Smith, and Superchunk. He fits right in. Maybe you’ve seen him drum for EVERY AVENUE or THIS IS HELL? We’re keeping him now. Go on and welcome him into the family! @thedenniswilson.

Speaking of family, we’re excited to see all of you – you guys became part of this album and we’ve leaked some snippets and nuggets over the course of us making this thing. Finally, here’s a song we can share with you. It’s called #REMEMBER. Turn it up. Share it. Hug your friends. Take a picture of a dog. Do the gorilla. See you on tour! #PUNKTHEFUCKOUT 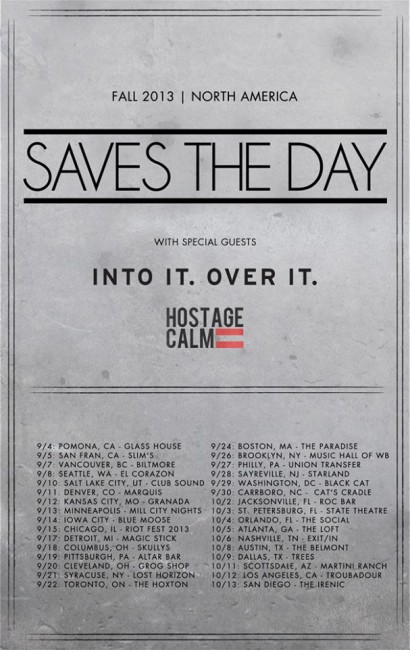 Tags: Hostage Calm, Into It Over It, Saves The Day