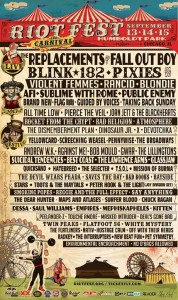 Riot Fest Chicago have added 13 more bands to their already incredibly stacked lineup, which includes Blink 182, Fall Out Boy, The Replacements’ first show in 22 years, Taking Back Sunday, Brand New, and many others.  For more information, check out Riot Fest’s website. Single day passes go on sale at 10am on Wednesday, July 24th, when the daily schedules are revealed.

Regrettably, due to unforeseen circumstances, MotÃ¶rhead, Bad Brains and Attack Attack! had to cancel their performances. MotÃ¶rhead has postponed their 2013 touring till 2014, so look for them back and rocking Chicago then.

Daily schedules and single-day tickets will be released at 10am CST on Wednesday, July 24.

3-day tickets are just about sold out. So get them while you can.  www.riotfest.org