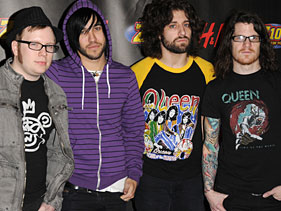 While the official line is still that Fall Out Boy is “on a break” or “decompressing,” Pete Wentz may have just confirmed what many  fans feared: The band is over.

It all started late Monday night, when Wentz began an impromptu Q&A session with FOB fans on his Twitter account. Within minutes, he started speaking openly about the band’s status

“Don’t you get it? A hiatus is forever until you get lonely or old,” he told one fan.  “I don’t plan on either.”

Then, when asked about his future with his band, he dropped a bomb.

“I can’t imagine playing in FOB again,” he wrote. “Something would have to change in my head or my heart, not my wallet.”

Wentz was then asked what made him change his mind about the band.

“I didn’t want you to hang on a string,” he wrote. “At the same time, if it happens, I don’t want to feel like a liar. The band might happen without me. Oh, well.”

He wouldn’t get into specifics, but Wentz seemed more than willing to take the blame for Fall Out Boy’s apparent breakup.

“Attack me,” he posted on Twitter. “I am one of you, only with a Kevlar vest and an alligator shell. Blame it all on me, ’cause I can take it. If you only knew how I felt.”

Wentz also posted a rather cryptic statement on his blog, which hinted that he had simply lost interest in Fall Out Boy and was actively searching for a new project to re-energize himself.

“Every day for the past seven years of my life I woke up with a purpose,” he wrote. “I felt driven. My eyelids forced awake. This was all that kept me going. When I lost that, I lost part of me. … That’s not to say count me out. I’m gonna jump back in. I just know that I have to be patient and wait for the right idea. I can’t just jump the gun and do whatever. Letting go of this giant part of my life has been hard, but I am convinced I will find something new that sparks me in a similar way. This is not a vacation. But I want to be back on tour, having my son watch me from the side of stage, and that will happen … when I find the right magnet.”

He then signed off with a Latin phrase, “Acta est fibula,” which translates loosely to, “The play is over.”

A few hours later, Wentz posted a second statement on his blog, perhaps in an effort to clear up all the confusion about the band and his status in it.

“I don’t know the future of Fall Out Boy. It’s embarrassing to say one thing and then have the future dictate another. As far as I know Fall Out Boy is on break (no one wants to say the ‘H’ word,)” Wentz wrote. “As much as I don’t have a solo project, I also can’t predict that I’d ever play in Fall Out Boy again, not due to personal relationships as much as that as a band we grew apart.”

Wentz wasn’t shutting the door on his band entirely, however.

“There is the possibility that FOB will play again without me, or I will be a part of it when everyone is on the same page. It is no one’s fault, and there is no animosity about the decision,” the statement continued. “I felt as fans, you deserve to know. There is no singular reason for this. The side projects or bands are supported by all members of the band. I am the single biggest fan of FOB and if this is our legacy, then so be it. I am proud of it.”

It’s not clear if the other members of Fall Out Boy were aware of Wentz’s statements.

“Nothing is official,” drummer Andy Hurley wrote on Twitter.”I have no idea what’s going to happen. That’s the most direct answer I can give.”

Neither Fall Out Boy, its label, Island Records, nor its management returned request for comment.