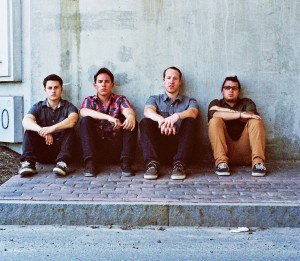 Buffalo, New York’s Pentimento have self-released their debut full-length album for free in light of recent label issues. The band was originally supposed to release the album today via  Paper + Plastick Records and Black Numbers, but has had to cut ties with those labels due to  legal action that was threatened by former label Panic Records. The album download, as well as a link to donate to the band to cover recording costs, can be found  here. A lengthy statement from the band can be read below.

Finally, the day is here! A few weeks back, we announced we would be releasing our debut, self-titled full-length record via Paper + Plastick Records and Black Numbers, and we were more than ecstatic to have the opportunity to work with a team of outstanding individuals with their minds and hearts in the music. However, we are displeased to announce that this will not be happening.

We feel that it is only fair to be honest about the situation and lay it straight out for you to understand. Honesty, truth, integrity, sincerity … these are all things that are not as plentiful in the world as they should be. Pentimento as a band and as individuals are on a collective journey to find more of these things in the world and within ourselves. We are not perfect. We are not meant to be. We are learning from our mistakes everyday and it is so exhilarating to do so and to realize that this exact process is what life is all about.

Panic Records has hired a lawyer to threaten legal action toward Pentimento, Paper + Plastick and Black Numbers if we continue on with our record release. That’s why this album hasn’t had a normal marketing plan around it – that’s why you guys haven’t been able to preorder the record online. No vinyl or CDs or cassettes have been pressed. Plainly and simply, we’ve decided to close our relationships with P+P/BN at the current time in the interest of protecting those labels from legal action, and in the interest of forging on ourselves as an independent band. Panic Records has made threats to file take-down claims from any digital distributor selling our album. They’ve enforced take-down claims with YouTube regarding the few songs we have already released for you guys to hear, which due to the situation are no longer available. Truth be told, we have been in this legal battle with Panic since September. And even though we had to put off the relationships we were so excited to start only a couple months ago, we MUST push on as a band.

That’s why we’re giving you guys our debut full-length record for free. Starting today. We believe in this record. As four individuals, there is nothing more that we want than to be playing these songs around the world. This is the reason why we must release the record independently. We feel it is completely necessary for us to tell this story and to offer you the record that we are so very proud of. Starting today, and for as long as we possibly can before a lawyer comes for us and tries to shut us down, you’ll be able to download our new LP for free. It should be clear that our intent is not to defame anyone in this matter. Our intent is to explain the honest story of where Pentimento is forced to stand today with the continued support of Jay Zubricky and GCR Audio.

The economics of being in a band have inevitably left us with a bill to cover the expenses of the record ourselves. This is where the “sob story” begins and ends, and again, please understand that our intent is not to give you a sob story. Our intent is to give you our record.

If you open a pizza shop, you need ovens and ingredients and workers before you can even get a single pie out to your customers. All of those things cost money. Being in a band is no different. The economics of releasing an album include recording studio costs, artwork, publicity, etc. Now that we are without label support, these expenses are in the hands of Pentimento, which like many other touring acts, spends less time at work and more time in the van.

We NEED you to hear this record. Therefore, we are giving it to you for free. We will assume the expenses ourselves. If you would like to donate to the economics of the four of us continuing on as Pentimento, information can be found at the end of this message.

Always be SMART, ARTICULATE and PASSIONATE – three words that we have gathered from an individual who has helped guide us to what we aspire to be. We are trying to do those exact things. This record belongs to you just as much as it does to us. Thank you for your continued support. We want nothing more than to share with you the music that makes us feel alive.

All donations will be accepted at [email protected] via PayPal. Please include your address and phone number (if you please) as we would like to contact everyone individually who has supported us financially.