On the third day of Christmas, idobi gave to me the pop punk collab of my dreams. 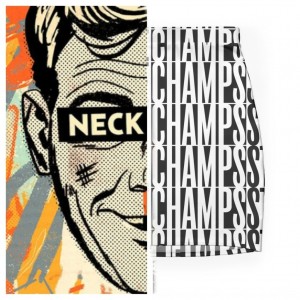 So, I hear you guys are doing a world tour together next year for the citizens of earth. Sounds like you’ll be spending quite a lot of time together–on stage, on planes, during (un)comfortably long van drives, pranking each other. Even though you haven’t announced the North American leg of the tour (yet), it’s a match that pop punkers everywhere are pining over–myself included.

You know what would make the tour a perfect score? Doing a collaboration together. Maybe it’ll be a new song, with just the right blend of crooning vocals and glorious hooks, or a cover of Taylor Swift (I mean, did anyone else catch the, “Blank Space” reference in “Secrets”?) or even releasing a split EP, just in time to perform it onstage together. State Champs bring in a more pop-influenced sound, as demonstrated by their latest album release, while Neck Deep bring in a slightly heavier sound to the table, creating just the right blend of the two sides to pop punk, along with an already established rapport from past tours. Either way, it’d be a surefire way to amp up the shows you’ve got lined up, being two of the biggest breakthrough bands in the genre.

No pressure or anything…y’all are just headed around the world and back.