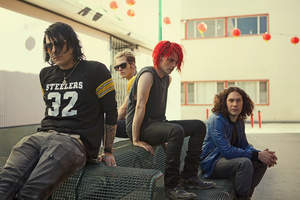 My Chemical Romance will hit the road in January for their 2011 “The World Contamination” tour — a full-scale trek in support of their brand-new album “Danger Days: The True Lives of The Fabulous Killjoys,” which will be released by Reprise Records on Monday, November 22nd. The tour will launch on April 1, 2011 in Portland, OR.

My Chemical Romance are riding high with the success of “Na Na Na (Na Na Na Na Na Na Na Na Na),” the first single from “Danger Days.” New Warner Bros. Records Chairman Rob Cavallo, who produced MCR’s platinum-selling album “The Black Parade” as well as albums by Dave Matthews Band, Jawbreaker, and The Goo Goo Dolls, among many others, produced the album. Those who pre-order the album on iTunes will instantly receive the track “The Only Hope for Me Is You.” The second single, “Sing,” is currently available for purchase from all digital retailers.

My Chemical Romance’s 2011 “The World Contamination Tour” dates are as follows: